Every once in a while a small miracle happens. And after seeing many plays for children both as mainstream and TIE, which have all been either adequate or good, you get to see one which stands out from the crowd, willing to be counted and proud to be what it is - perfectly formed entertainment (and education) for children. This is a Ronseal production - it does exactly what it says on the advert!

M6 Theatre Company present "a highly visual and energetic play about rivalry, strengths and weaknesses, centred around two superheroes with a very big problem. // A tadpole catching competition challenges the dynamic duo to harness their strengths and overcome their differences. Working as a team, will there be enough time for them to save the world, together?"

Essentially, it is a story of two superheroes who work together but not as a team. They are always fighting and bickering with each other, always wanting their own way, and subsequently failing every mission. Control therefore gives them half an hour to find a way of being able to work together or they will be demoted or even have their capes taken from them altogether! It is during this half hour that they do find a way through. It starts with a pool of tadpoles in a derelict building due for demolition, and ends with a very real and touching scene where one who is scared of heights conquers and overcomes this to rescue the other who has her leg caught in the floor of the top storey.

There is something for everyone in this 50 minute piece. There is physical and visual comedy, there is verbal comedy for the older ones amongst us to appreciate, and there is a very solid and easy story to follow which hits the mark just right. Modern and sci-fi enough to appeal to the adventurous, and yet serious and heart-warming enough for the more 'romantic'. There are moments of pure genius, moments of side-splitting comedy, and a couple of moments of real tenderness. And of course it has a happy ending. What more could you ask?! 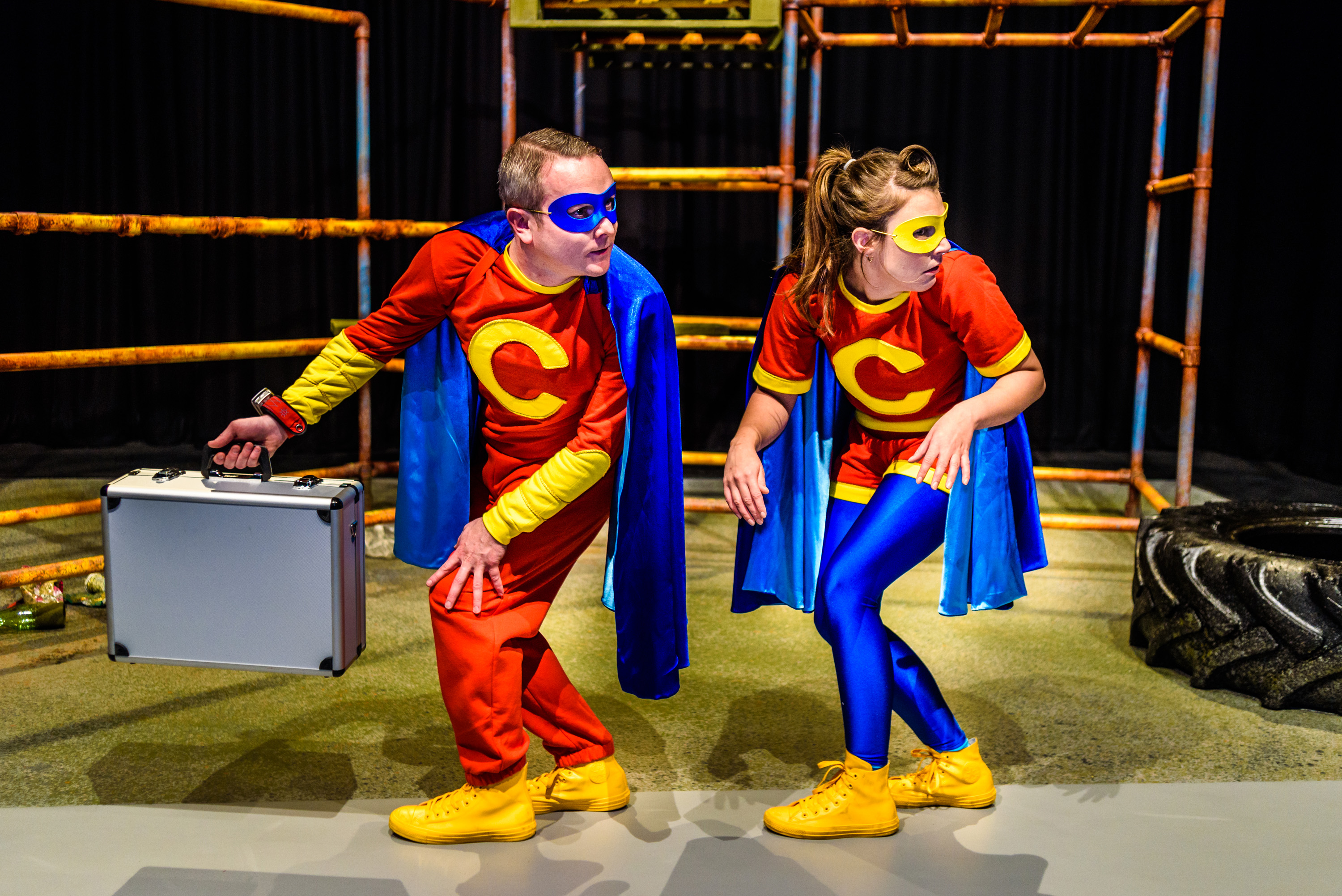 With a brilliant yet simple set of a workmen's scaffold and a large tyre designed by Joss Matzen, original music which had that real 1980s TV adventure series feel to it and suited the play perfectly, composed by Tayo Akinbode, and very sensible directing with a touch of fun and flare for real storytelling, by Gilly Baskyfield, it was as near to perfect as any touring children's theatre production could ever be.

Of course, the play is only as good as the actors, and the two person team entered into the spirit of this gentle comedy-with-a-message wholeheartedly and the truth and commitment in their playing paid dividend. They were Luke Walker as Captain Clever, and Emily Spowage as Captain Conker. They were helped also by the voice of Control, which came pre-recorded, but was voiced by Sue Johnston.

The production earns even more Brownie points from me though. First, everyone is given a programme. A huge plus. So many small-scale touring shows do away with programmes these days and I find that appalling. Everyone deserves due crediting and audiences like them. Second, the two cast members came out into the foyer in costume after the show to chat with and have photos taken with their young new-found fans. A really lovely PR touch which again is neglected by so many TIE companies, but for me, so important and part of the job. Well done on both counts!

M6 Theatre Company have a long history of delivering first class children's entertainment, and they can now proudly add this to their ever-growing list.

For more information on both this tour and the company itself please see www.m6theatre.co.uk