What is ‘home’? How would you cope if you were suddenly displaced from what you considered home and all those you held dear? This double bill of performances from Theatre Ad Infinitum and students at the University of Salford attempted to explore these, and other, difficult questions, and the results were certainly thought-provoking.

The evening began with Run, a devised production made in collaboration with students from the University of Salford and the well-established company Theatre Ad Infinitum, who are Associate Artists at The Lowry. The studio was a perfect location for this, as it gave the performers ample space to run, jump, and generally showcase their impressive physical theatre skills. The performance itself was surprisingly slick, well-choreographed and enthusiastically acted, as it told the stories of several refugees. These horrific tales were interjected with hateful social media posts, vile articles and vicious news interviews from those opposed to the refugees, which when repeated verbatim painfully juxtaposed the human suffering element of the debate. 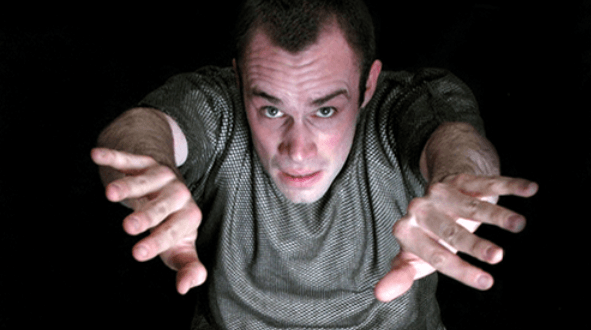 I would have liked to see the students perhaps explore the nuances of the issue a little more; while the stories were told powerfully, the production itself did little to comment on the complexities of problems, causes, fear, and distrust surrounding the refugee crisis, and therefore could have been seen as overly simplistic. It is also interesting to note that the performance was paired with Odyssey, a well-known story of a complete journey, while the participants of Run appeared to focus completely on displacement and less on issues found later in the process, such as trafficking in refugee camps or racism discovered once asylum is granted. Although this may have been a conscious decision as the crisis itself is far from a conclusion, it did mean that the story of the production was slightly less well-rounded than it could have been. Additionally, while the forays into portraying social media on-stage expertly displayed the luxurious distance the general public have when viewing the refugee crisis, it would have also been interesting for the performers to acknowledge their own distance from the issue. However, this could have easily been due to time constraints and over the short time they had the students delivered an engaging, emotive and energetic piece of theatre.

The second performance in the double bill was Odyssey, a one-man show performed by George Mann. Mann was utterly compelling, a true visual storyteller who completely immersed his audience in the world of the tale. It was a narrowing of focus in many ways, switching from a group of students who co-operated incredibly well on-stage while exploring hundreds upon thousands of viewpoints and stories to a single, captivating performer re-telling the adventures of one man. Without Run, Odyssey would have simply been a wonderful example of brilliant story-telling, but with the students’ piece it became something more. The classic tale of Odyssey became a comment on society today, as the audience listened to one suffering man, displaced and severely tested by fickle gods, receive unlimited help and hospitality from a multitude of strangers. Individually, these performances were impressive, but together they became something far more powerful, and are certainly a brilliant testament to the amazing things that can happen when professionals lend their time to devise with students.