Most people - if not familiar with the story of The Nutcracker, will be familiar with some or all of the music written by Tchaikovsky - the Dance of the Sugar Plum Fairy perhaps being one of the most recognisable pieces.

Tonight's version was performed by the Moscow City Ballet which was founded in 1988 and prides itself on an innovative and fresh approach to the classical ballets.

The set was quite impressive - no props of any description on the stage but beautifully intricate back cloths depicting a Christmas household scene, complete with lit Christmas tree. For the first part of Act One, Scene 1, most of the company danced and the stage was quite crowded and nothing particularly stood out for me. However, once the Nutcracker, Doll and Mouse King came to life, my attention was held very firmly.

The standard of the dancing was unsurpassable and there were also some moments of humour. The Doll (Marina Larina) and the Nutcracker Doll (Valeriy Kravtsov) were absolutely believable as puppets - how Marina Larina managed to dance without bending her legs at all I do not know! Their ability and control is admirable and they were a joy to watch. My only criticism is that their part in the ballet was over too soon. 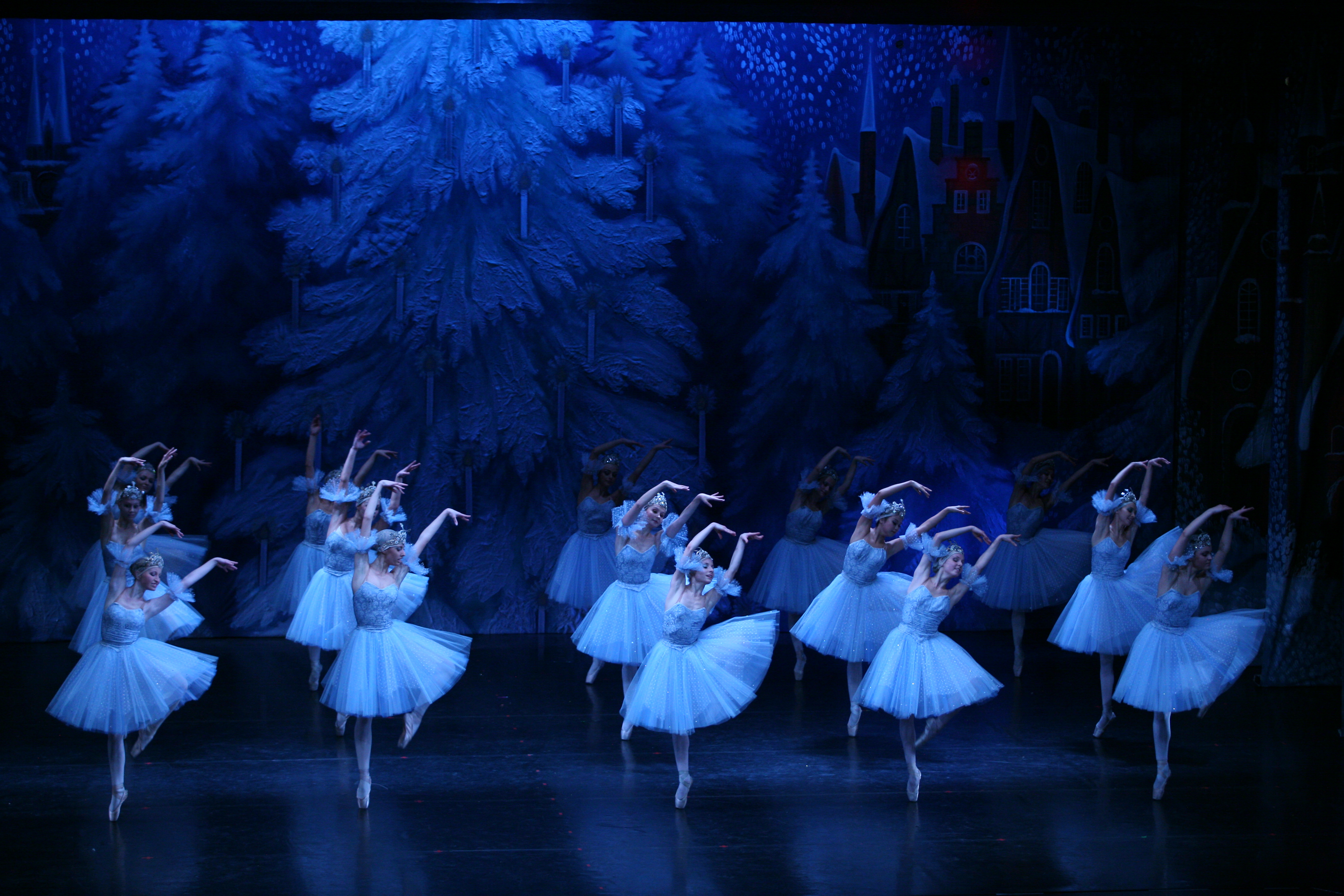 Towards the end of Act One, we encountered the dancing snowflakes in the enchanted forest:   eighteen ballerinas who danced in perfect symmetry. This was one of my favourite parts of the whole performance. They danced effortlessly, almost as one and it was an amazing spectacle to witness. This, together with the earlier scene involving the puppets, really underlined the fact that this is a high class production and an extremely talented ballet company.

Just a slight niggle as Act One came to an end - for about ten seconds, a rather intrusive sound could be heard.

I actually thought it was a vacuum cleaner. It turned out to be the equipment suspended above the stalls which produces the 'snow' to end Act One.   This caused some amusement in the audience as the two machines very half-heartedly blew out some reluctant fake snowflakes.   It did distract somewhat.

The more recognisable pieces of music were in Act 2 which mainly comprised several different dances by separate dancers: a Spanish dance, Russian dance, Eastern Dance and Chinese Dance.   These were all very different as you would expect and I did see some elements of contemporary dance incorporated.

The two male supporting dancers in the Eastern dance were particularly compelling to watch as their legs were so long - I thought that if you were over a certain height you couldn't be a ballet dancer but they proved that theory wrong. They had immense grace and although it was a little out of the ordinary, I enjoyed it.

Talgat Kozhabaev was slightly disturbing in appearance when in role as the magician, although his dancing was wonderful.   He also danced solo as Drosselmeier in Act 2 and I found his dancing to be charming and elegant and he had great charisma.

There was some stunning dancing by Clara (Yuliya Zhuravleva) and the Nutcracker Prince (Andrei Zhuravlev) - both solo and together.   They performed lifts which were gravity defying but they made them look sublimely easy.

The use of colour really enhanced the sumptuous feel of the ballet as a whole - there was always something beautiful to look at.   The lighting was simple but very effective. The costumes were lavish and the sets were very visually pleasing and the whole production had energy and drew the audience in.   The dancers looked as though they were enjoying performing. In my experience, not many ballet dancers smile while performing so it was pleasing to see just that.

The music (performed by the Moscow City Ballet Orchestra) was beautifully played but I did feel it was a little understated and quiet and I would have liked it to have been bolder in parts.

To summarise: The Nutcracker is a strange story and at times, it isn't always entirely clear what's going on but it doesn't really matter.   You don't need to understand everything to appreciate the beautiful art form unfolding in front of you.   The stamina and expertise of all the dancers in this production is truly something to behold and I found it to be a very enjoyable and entertaining evening.