And Then You Kissed Me - The Lowry, Salford

And Then You Kissed Me explores the way in which sexual chemistry and an innate need for love and care within all of us can become toxic. The relationship experiences of several characters are interwoven to illustrate how one choice can define a person for many years.

And Then You Kissed Me completes a trilogy of hard-hitting plays from award-winning company Footlights, which includes Just A Few Quid (Media City UK, 2012) and The Queen Is Dead (The Lowry Studio, 2014).

The play explores the harrowing and shocking subject of Domestic Abuse. The accounts we heard were all real. Victims, perpetrators, the police and therapists were all given an opportunity to tell their stories for the research and development of this script. Whilst the material is overwhelming and hard to comprehend it is based on verbatim stories from all rungs of the social ladder to provide the audience with an impactful and wide-ranging insight into Domestic Abuse and out of the bleakness of many lives and experiences comes a spirit or survival and a will to change circumstances forever.

The background music was very appropriate and well thought out for the audience to listen to before the play began. After a late start, the show commenced with five actors on a very basic stage with three plastic seats on each side and a double bed in the centre, the script is eighty minutes long with riveting monologues showing how domestic abuse can cross all classes and creeds and devastatingly effect both male and female. 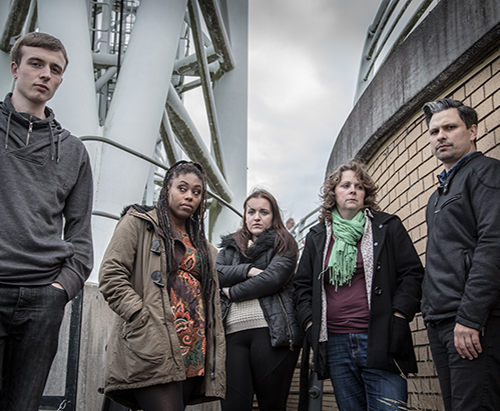 The scenes were powerful and honest as they portrayed, control, fear, violence, the lack of professional support, the depression and the helplessness, the actors seamlessly moved through their different characters making it wholly believable – they also held your attention as you painfully awaited their next lines. The audience remained silent throughout and at times endured difficult scenes such as: the sleeping in a phone box, the kissing and making up (which was a little awkward and slightly unnecessary as they straddled each other all you could hear as the other actress carried on was the noise of sloppy kissing), the Boxing Day drinks ending with missing teeth, metal plates in her jaw and perforated ear drums, the events leading up to a forced and manipulated marriage acceptance and then the disaster of the wedding night.

The cast consisted of talented North West actors and actresses who worked well together, Sasha Corfield who has only recently graduated from ALRA North was the strongest performer of the night for me, she was real, a natural and an extremely talented young lady. Orla Cottingham the most experienced performer of the crew held her roles perfectly and oozed maturity as a professional.

This is a difficult but thought provoking play one for 15 years and over due to the contents of the material. Footlights have been fantastic in their public engagement and social media campaign to highlight the effects of Domestic Abuse so well done to all involved.