Lord of the Flies - The Lowry

I feel sure that most of us will already be aware of the storyline. It has been on the school syllabus for some time and is considered a modern classic; with even two film versions to its credits. It is, in essence a very simple story - a plane crashes on an uninhabited tropical island, the only survivors being a group of young boys. It is the overriding struggle of human nature; the exposition of fear and the fundamental conflict that exists in all humans, good versus evil, which Golding uses to terrifying effect in his novel, and it is that theme which has been debated upon endlessly.  In The Lord of The Flies this manifests itself as the struggle between wanting to live by order, rules, morals and to act peacefully; the desire to work as a group for the good of the group rather than simply gratify our immediate desires, act ruthlessly and violently and to forcedly impose supremacy and power over others.  The "good" being Ralph and Piggy, and the "evil" represented by Jack. What makes Lord of the Flies all the more horrific though is that these are children; just young schoolboys, some as young as six.

This stage production, presented by Regent's Park Theatre Ltd, and on tour until the middle of March is a faithful adaptation of the novel, but, although the overall feeling for me was that this was a very good and worthy production, a potential 'hit' even, there was a certain something missing from this production. I am not at all sure what it was, or even if I am able to articulate this feeling, but I shall try. 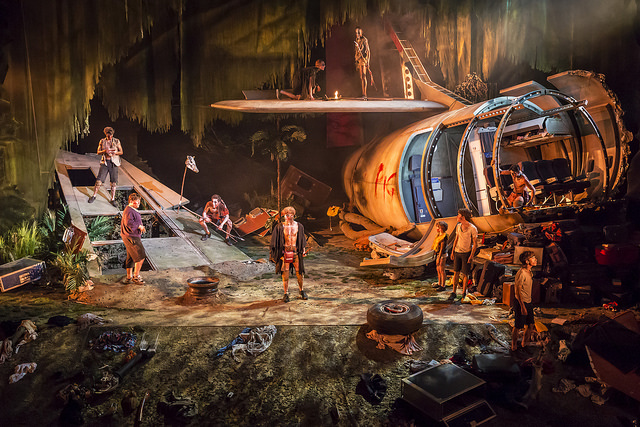 The set looked magnificent; a broken plane fuselage with debris and luggage strewn all over. One wing still attached to the plane, as was the tail, and the other wing on the opposite side of the stage. The backdrop and drapes depicting 'jungle'.  The set, over the course of the play, cleverly deconstructed, becoming the hill, the camp, the precipice, the jungle itself, the spot where they kill the pig, etc etc...and with each new scene, which very cleverly and seamlessly overlapped each other, another part of the set fell apart or opened to a trap door.  This deconstruction of the set very cleverly and clearly mirroring the disintegration of order and the oncoming of fear and / or despair amongst the boys.

What bothered me was the obvious and visible metal gangway from offstage to the plane's wing. It neither belonged in the jungle nor was it part of the crash, but was simply there as a way of getting the cast easily and quickly from one part of the set to another.

This play must also have caused many health and safety issues. And as if many instances of fire on stage and boys carrying flambeaus wasn't enough then they also stamp a large conch shell to smithereens with shards flying everywhere. It's a very busy set, full of hidden devices and dangers, so that we understand that the choreography and  movement around the set - especially when running and fighting, which happens often - must be measured and absolute every time. There is little or no margin for error in this set, and I THINK that's my point....  The whole thing was too "safe", too "measured".

A group of unruly boys let loose on an adventure on a deserted island, and their running riot and boisterousness is all the time being kept in check somehow.  The production wasn't 'raw' enough for me perhaps; nor did it challenge me in any way. I came out of the theatre feeling ambivalent to what I had just witnessed, rather than being affected by it.

There is lots to like about this production, but there were also a couple of things which didn't really cut the mustard for me as well too. Directed by Timothy Sheader and Liam Steel; their style was a little strange at first, mixing realistic, naturalistic acting with moments of slow motion, but once I bought into this it was actually very effective and worked well. Even the loud music to accompany certain scenes which jarred on me at first, managed eventually to get my approval. The one thing that did not however, was this adaptation. It was updated to present day, but really rather clumsily, by the unnecessary references to 3G, Instagram etc., and some of the dialogue seemed strained and unnatural. Things which teenage boys would not say.

I have no problems at all with modernising the script and bringing it up to the present, just so long as the modernisation is constant and everything 'works'.  However, why would a plane carrying young boys away from England to escape the war - bombs were being dropped on England - be consistent with Ant and Dec references?

The attention to detail in this production was, in some cases, too precise, and then, there were instances when it seemed to be thrown out of the window completely. For example, when 2 young boys one at each end of a flimsy stick came "high-ho-ing" on to the stage with the dead wild boar on the spit between them. Even a young boar is heavy!  Or the lights inside the plane and on the tip of the wing surely would not still be flickering months after the crash, but they were on the opening of the second half.

The end bothered me too. It felt rushed and unfocused. Where did the helicopter pilot come from? And why did he have to say such trite and awful dialogue? Why did the boys have to line up like they were concentration camp prisoners? Sorry, but the end certainly needs looking at again for my money. 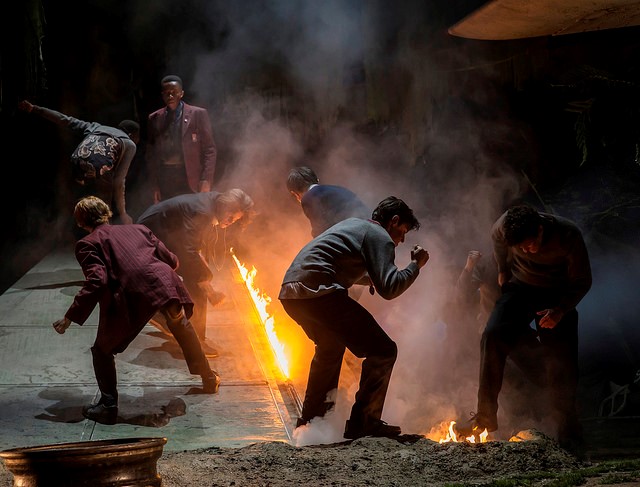 Having said all that, high praise indeed must be given to every young actor on stage. I know some were 'playing younger' than their real ages, but not much, and this did not matter. All were still quite young and my hat goes off to the few last night who were making Lord of The Flies their professional theatre debut.

It was a very strong ensemble cast, all working extremely well together. Of course, the three main leads need to be absolutely brilliant in order for this play to work; and I am certain better actors could not have been found!  Luke Ward-Wilkinson, looking rather Daniel Radcliffe-esque, was a very worthy and convincing Ralph.  Connor Brabyn played Jack in this performance, and he was the embodiment of teenage evil. However, the award for best actor simply MUST go to Anthony Roberts for his interpretation of Piggy; the fat, myopic, goodie-goodie that every schoolboy picks on; here becoming a real, warm, believable and empathetic character and anti-hero. Bravo young man! And one further cast mention is necessary too. The role of Percival, the youngest boy, was played last night by Guy Abrahams. Well done indeed to you - a great debut performance!

As mentioned earlier, I really do feel this production, as we say in the profession, 'has legs'. However, for it to become 'great' it needs to challenge more and not stick to the safe and conventional. William Golding asks some very big questions about the fundamentals of human nature, so why was the audience not being subliminally similarly challenged?