Everyone is familiar with the story of Sleeping Beauty. However, Matthew Bourne's Sleeping Beauty is slightly darker than the Disney version most of us grew up with and it has a few little twists thrown in for good measure (vampiric, winged fairies, a puppet baby and a tattooed avenger - see what I mean?!) Those familiar with this dance company's productions will recognise this as one of his trademarks.

As soon as the curtain goes up, we are immersed into a gothic world of splendour - the set is lavish and sumptuous.   Even the footlights have gothic wings.

The story begins in 1890 when Princess Aurora is a baby.   The baby Princess is played by a puppet - an extremely entertaining puppet with a character all of her own. This is very cleverly done and she completely steals Act One. 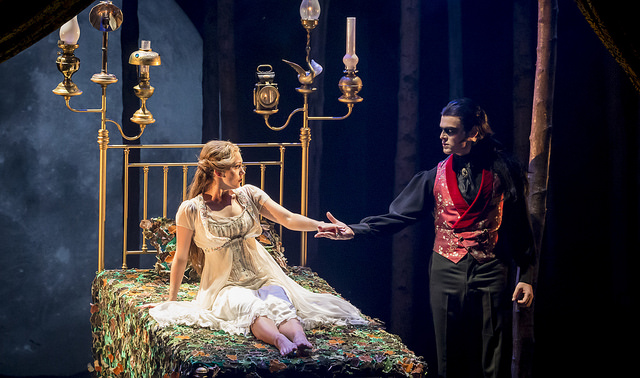 During Act One, the Princess Aurora is visited by the good fairies who watch over her.   The dancing in this section is quite bewitching and the costumes are simply beautiful.   Enter Carabosse, the Dark Fairy, to cast her spell, extremely well portrayed tonight by Adam Maskell who captures her entrancement and evil excellently.

We move forward to 1911 and Aurora's coming of age. One slick scene change and we are now in the Edwardian era and this Act takes place in the garden of the castle.

We learn (by words projected onto the stage before the curtain goes up) that Carabosse is dead but her curse has not died...how can this be?   It becomes apparent that her son, Caradoc, is determined to avenge her.   He is also played by Adam Maskell who is extremely imposing in this role, very commanding and slightly intimidating!

Grown-up Aurora is played by Ashley Shaw.   Her dancing is simply breath-taking.   She performs moves which appear as if she is dancing underwater and there is an ethereal quality to everything she does.

Aurora is pursued by many suitors but her love is Leo, the Royal Gamekeeper.   Remember this as its important!

The inevitable happens and Aurora falls asleep and is imprisoned in the castle behind locked gates and a soon to be overgrown forest.   Count Lilac, the King of the Fairies, ends part one of the show by giving Leo a vampire kiss...no, I didn't read that in the original either but it makes perfect sense...read on.

At the beginning of part two, we hurtle forward in time by one hundred years to 2011.   There is a tent outside the locked castle gates...from which Leo emerges.   Yes - the vampire kiss was to give him eternal life so he could be there when she wakes up...and he's been waiting in a tent for one hundred years.   Now isn't that romantic.

Within the castle, we see Caradoc desperately trying to wake Aurora from her protracted slumber...to no avail.   As everyone knows, she can only be woken by her true love's kiss.   This is certainly not going to happen for Caradoc, no matter how hard he tries...and he really does try.   The dancing in this section was particularly mesmerising - Ashley Shaw is able to dance as if asleep and can even make being floppy look elegant. The choreography is simply outstanding.

When Leo attempts to break into the castle, Caradoc is waiting for him.   Leo is forced to kiss Aurora and obviously, she wakes up. However, Aurora is led to believe that it is Caradoc's kiss which has woken her.   We fast forward to the day of their wedding - now this is a spectacle to behold.   Red, lavish and sparkling - and that was just Caradoc's rather gorgeous long coat. Aurora is brought forward in her wedding gown but then we realise that Caradoc does not intend to marry her, he intends to kill her.   A nod to the modern day is evident here as he appears bare chested (with black wings) with a tattoo denoting "Avenge".   Fortunately, he does not get to carry out his evil plan and Leo and Count Lilac save the day. 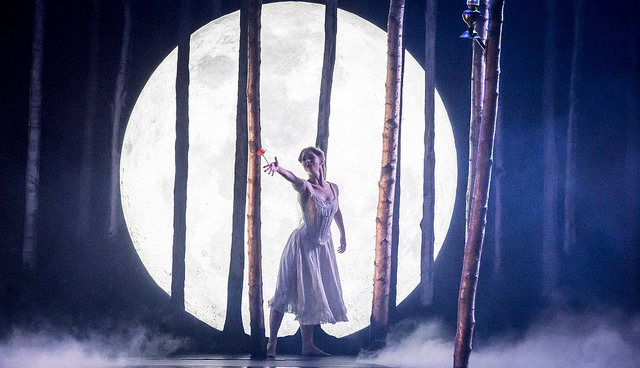 We go full circle by the end - after Leo and Aurora have been tastefully covered up by the good fairies, they emerge with a puppet toddler - complete with wings - much to the audience's amusement.

After the show, we were treated to a Q&A session with Matthew Bourne, the Director and Choreographer (who I had spotted in the audience sitting three rows in front of me...apparently he always sits in the audience on a Tuesday). We learned that a production can take up to two years to develop although the rehearsal period is usually only 4-6 weeks.   This is pretty amazing, considering the quality and calibre of the performances.   The dancers all have to have a minimum of three years' training but this can be in classical or contemporary dancing or in musical theatre. As Matthew pointed out, they are not a classical ballet company, they are a dance theatre company.

In an exclusive reveal, Matthew told us that he is working on a new production.   We weren't allowed to know what it was but he could tell us that it will be a world exclusive next year and the Lowry will be one of the first places to show it.   You heard it here first! (Unless you were also in the Q&A session of course...)

As with other Matthew Bourne productions, there is no speech but speech isn't necessary.   The dancers capture every nuance to perfection, you cannot fail to understand what is unfolding before you.   The music is interpreted perfectly. This must surely take months and months of work to get the choreography to fit in just so.   The sets are beautiful, there is so much to look at and absorb.

This show is a wonderful, indulgent feast for the eyes and is pure escapism. The choreography is thrilling and the sets are exquisite. If you miss it, you will miss out.