A spectacular play based on the novel of the same name by English author Daphne De Maurier - a best-seller which sold 2,829,313 copies between its publication in 1938 and 1965, and has never gone out of print. The novel is remembered for the character Mrs Danvers and the fictional estate Manderley, and its opening line:

“Last Night I dreamt I went to Manderley again” - by the second Mrs de Winter.

The book was later turned into a film by Alfred Hitchcock, and although I admit I haven’t seen that (nor read the book), I have heard it, as most Hitchcock films are, is fairly dark. Kneehigh Theatres delivered the dark eerie side to Rebecca, as well as adding in plenty of humour!

“Rebecca” tells the story of love, jealously, betrayal and blackmail. The play opens with a Mrs de Winters reciting the well know line (above) and fishermen telling the story of the tragic death of the first Mrs de Winters, who allegedly died in a tragic boating accident. Her body was pulled from the water and a corpse is raised to highlight this in the eerily spooky opening scenes. A fisherman’s boat fills the set on top of wear the corpse his laid to rest and becomes part of the stage set - a cleverly elaborate Gothic style mansion that reminds one of something from Great Expectations or the Addams Family, with the boat sank in the middle (turned upside down it would appear as it is not “open”, i.e. it is a flat surface used to walk and dance upon. The main stage set remains the same throughout the show but is cleverly adapted (with the help of different windows) from the Manderley estate home to the cottage, to the water where the tragedy took place.

Whilst working as a companion to a rich American woman on holiday in Monte Carlo, the twenty-something meets a wealthy business man, Maxim (Max) de Winter. (Max is a forty-something year old widower. The pair start to date and after less than a month the pair marry.   After their honeymoon, Mrs De Winter the second joins Max in his mansion in Cornwall, in the beautiful West County estate Manderley.   There she meets his slightly eccentric younger sister Beatrice (Lizzie Winkler), and her husband Giles (Andy Williams), Robert, the faithful and loveable Butler (played by Katy Owen), Jasper the curious dog (he is not shy when it comes to sniffing people out!) and the sinister and bitter Housekeeper, Mrs Danvers, who was utterly and totally devoted to Max’s previous wife Rebecca. She continually attempts to undermine Mrs de Winter (whose first name nor maiden name is never revealed) psychologically whilst subtly suggesting that she will never attain the beauty or charm that her predecessor possessed.   Mrs de Winter tries in vain to add her own touch to the Manderley estate, however each time she does anything Mrs Danvers (or “Dani” as Rebecca used to call her) describes how Rebecca ran it when she was alive. Mrs Danvers takes sheer delight in telling Rebecca that she is too inexperienced and lacks the knowledge to run an important estate such as Manderley. 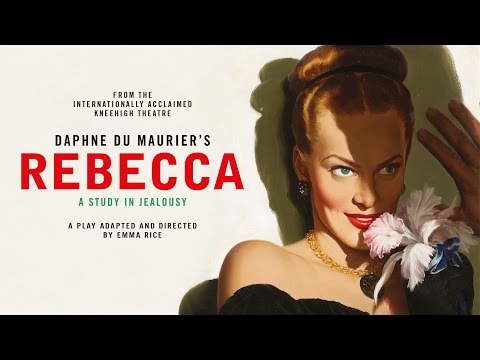 Mrs de Winter starts to doubt her capabilities and Max’s love for her, whilst becoming drawn to the cottage on the estate - despite the warnings to keep away, she finds it hard to resist.   Does the cottage have something to hide? Why does Max still go there? Is there more to Rebecca’s death than meets the eye?

I knew nothing about the story prior to this evening and was not expecting much to be honest. From what I had heard about the story from others, I was expecting something rather bland. However, it was anything but bland. With laugh out loud gags aplenty, stunning scenery and choreography, Rebecca had me drawn in from the moment Lizzie Winkler (Beatrice) and Andy Williams (Giles) graced the stage. The pair were a loveable duo, perfectly paired as the socialite upper class couple with a comical edge to them.   My favourite character and performance of the night however came from Katy Owen as Robert. Various members of the cast played dual roles, including Katy, however it was her portrayal of the role as dedicated servant and butler Robert. Admittedly Katy had the best gags in her role as Robert but her petite childlike frame and pure innocence made her even more loveable.

Never have I seen a play where I had little prior knowledge of yet come out of the theatre with such a buzz and overwhelming urge to go back and see the performance again.

One of the things I adored about the stage set is the subtle letter “R” (for Rebecca!) within the design - from the ornate staircases to vases, at first I even thought I had imagined it but confirmed I wasn’t going crazy with fellow theatre goers in the interval. It was if it was a subtle reminder of Rebecca’s presence and as if she was haunting the Manderley estate.

With live on stage music and the occasional song, Rebecca is truly and outstanding show, and Kneehigh Theatre have well and truly brought this classic tale back from the dead.

Rebecca is playing at Sheffield Lyceum Theatre until Saturday 28th November and then moves to the Mayflower in Southampton. This performance is definitely worth seeing more than once so I strongly advice contacting the theatre. Although going by last night’s opening performance, very few seats were empty!

Tickets are available via the theatres website http://www.sheffieldtheatres.co.uk/event/rebecca-15/?tab=0 or call the Box Office: 0114 249 6000