Beryl by Maxine Peake - The Lowry

Not content with being one of our leading Film, TV and stage actresses, Maxine Peake shows with this stage adaptation of her own critically acclaimed BBC Radio 4 play, that she is also a playwright of some considerable skill and talent. The subject of this play is Leeds born sports woman, Beryl Burton, MBE, OBE, a wife and mother who during the 1960’s and 70’s cycled her way into the record books becoming a five times world pursuit champion and also winning the national title a record 13 times. Given the current popularity of cycling and the hype which now accompanies the annual Tour de Yorkshire, it is easy to see why The West Yorkshire Playhouse originally produced this production in 2014 and are now with financial support from the Arts Council touring this excellent revival to conventional theatre spaces and community centres across Lancashire and Yorkshire. Add a touch of romance and sentimentality to the story of a feisty young woman overcoming great challenges in a male dominated sport and what emerges is a highly inventive, heart warming and hugely enjoyable production.

A hard working cast of four play a large number of roles to tell Beryl’s compelling story, as Beryl, Samantha Power is every inch the embodiment of true northern grit and a formidable sparring partner to her loving and endlessly supportive husband Charlie. Power’s performance rises magnificently to the challenge of conveying both the physical demands of the role and also the many different emotional shifts and changes that Beryl goes through during the course of her personal life and whirl wind career. The other actors in the cast, Matthew Ganley, Rebecca Ryan and Lee Toomes provide excellent support, with Ganley shamelessly stealing the show at every available opportunity playing a wonderful variety of comic cameos including the Queen, an air stewardess and Beryl Burton’s own mother.

Played out on a black theatrical box set decorated with a multitude of props to replicate Charlie’s bicycle workshop, the combination of physical movement, video projection and atmospheric lighting provide the perfect setting from which to sit back and observe Beryl’s astonishing life and career. If you want a slice of pure theatrical magic to savour then this is a show to seek out before the tour finishes at the end of November, (Beryl is at The Lowry until November 4th).

According to Beryl Burton’s daughter, Denise, who also features prominently in the play, it was her mother’s competitive spirit and determination that eventually exhausted her and wore out her body. Watching Beryl, one is made acutely aware that without her and other pioneering sports women, the likes of Jessica Ennis-Hill, Victoria Pendleton and Laura Trott would no doubt have found their own paths to get to the top that little bit harder. As well as bringing Beryl Burton’s inspiring story to public attention, in writing Beryl, Maxine Peake has written a play with strong roles for women that I am sure will stand the test of time and be performed again and again, with hopefully one day the playwright herself taking on the lead role. 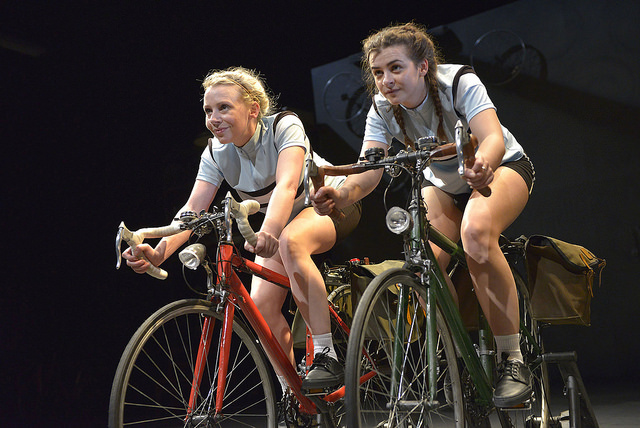