Review: The Boy in the Striped Pyjamas

Set during World War II, the story of The Boy in the Striped Pyjamas is seen through the innocent eyes of Bruno, the eight-year-old son of the commandant at a concentration camp, whose forbidden friendship with a Jewish boy on the other side of the camp fence has startling and devastating consequences. Bruno's friendship with Shmuel takes him from innocence to revelation, revealing the poetic irony that through a child’s eye everyone can appear the same.

The Boy in the Striped Pyjamas is a moving fable brilliantly told on stage by a strong cast under the directorship of Joe Murphy, performed on an unusual round stage designed by Robert Innes Hopkins with a minimal backdrop, the lighting designed by Malcolm Rippeth plays a huge part setting the mood in this piece as well as clever projections by Andrzej Goulding

The show commences with a monologue from Helen Anderson as the grandmother of German born Bruno before the story begins to be played out fully.  The role of Bruno is brilliantly portrayed by Jabez Cheeseman, one of three young actors who share the role during this production.  Similarly, Shmuel, Colby Mulgrew is also one of a second trio of actors.  Both on stage tonight at The Lowry gave assured performances way beyond their years.

As the story moves along the clever scene changes are accompanied by projections with a typewriter effect providing a narrative to the locations visited on the shows journey.

This is certainly a show to pack plenty of tissues for, as the final journey of Bruno and Shmuel plays out to a tearful conclusion.  As much as there is no evidence to suggest this is a true story, the history books tell us friendships like this certainly did exist.  There are few more moving climaxes to a stage show.

The Boy in the Striped Pyjamas plays until Saturday at The Lowry then continues a national tour until the 27th June. 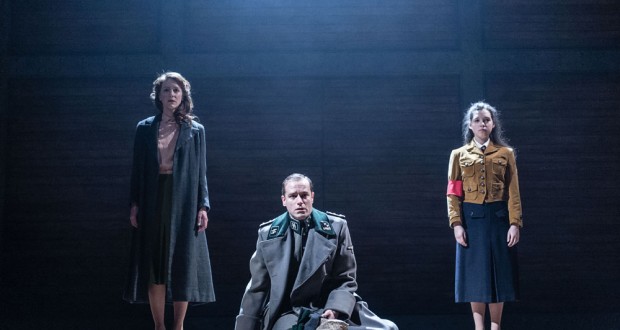