Dark. Intense. Mesmerising. Simply stunning. A show you will not forget in a hurry. I would write about it in my diary……but that would be a Sin; a punishable offence….

Northern Ballet returns to Sheffield Theatres with a new ballet for 2015 – 1984. Based on George Orwell’s (real name Eric Arthur Blair) masterpiece book of the same name (written in 1949), a futuristic dystopian novel, set in Airstrip One (formerly known as Great Britain), in a world of never ending War, omnipresent government surveillance and public manipulation. In Act One, we meet Winston Smith, who works for The Ministry of Truth. Upon leaving work one day, he finds himself in an Antique/junk shop in the slums of London. There he buys a blank book with the idea of keeping a diary. This is a punishable offence in the eyes of his country’s omniscient leader, Big Brother. As he leaves, he notices that a woman is watching him. In the safety of his flat, Winston, unseen by the constant surveillance system the Party has in place, records his rebellious thoughts towards Big Brother. As the days pass, he returns to his work at the Ministry of Truth, where he falsifies historical records of events in accordance with the current Party Policy, erasing all traces of those members which have been obliterated. He is forced to take part in the compulsory “Two Minutes Hate” - designed to provoke hostility towards the enemies of the Party.

Winston heads to the outskirts of the city to escape the watchful eye of Big Brother, which is inhabited by the Proles - a section of society, deemed uneducated and unworthy of constant surveillance of the Party. He returns to the Antique stall where he bought his book/diary from previously and is drawn to a beautiful paperweight, a magnificent orangey coral colour which reminds him of how the world used to be before Big Brother. Mr Charrington (Hironao Takahashi), the Shop Owner, shows Winston a spare room which is free from surveillance systems. As Winston prepares to leave the shop, he spots the mysterious woman again and this time recognises her as his co-worker, Julia (Martha Leebolt). He rushes off - convinced that she is a spy. As the story progresses the two form a relationship and use the spare room at Mr Charrington’s store as a place to escape and continue their love affair in secret. However their new found love is soon put to the test as the pair are taken prisoner and Winston must decide between Julia and Big Brother.

The stage set is stunning, I particularly loved the Antique/junk shop and found my eyes drawn to the many trinkets on display! The Ministry of Truth and Airstrip One itself are eerie places which made every hair on the back of my neck stand on end, along with the equally eerie music conducted by Nathan Fifield. The regimented uniforms of the Ministry of Truth work perfectly with the story and set along with the military style dancing and robotic stance made the brain washing work of Big Brother seem not only realistic but at times quite scary! I certainly won’t be going to bed without leaving a light on for some time after this performance - I still see Big Brother’s eyes fixated on me!

It was interesting to see that Northern Ballet, along with similar organisations I have recently reviewed shows for, give Principal dancers the chance to perform lead roles at different venues and dates. I presume this is the case as the programme includes an A4 printed sheet with the date and venue with a cast list for that particular show. It would be interesting to see which members of the Company get to play lead roles throughout the tour.

Japan born Hirondo was perfect as O’Brien, the mysterious man and a member of the Inner Party, who although he befriends Winston, is not what he seems. Manchester born Tobias Batley is breath-taking as Winston Smith, a member of the Outer Circle of the Party, a worker for the Ministry of Truth and whose illicit love affair with Julia (Martha Leebolt) pushes him to make a life impacting decision.

Having seen several of Northern Ballet’s productions in the past (mainly in Leeds theatres), I knew that I was in for an outstanding performance which I certainly was the case. Although previous Northern Ballet performances I have been to see have been of a fairy-tale theme, appealing to audiences both old and young, this show was much darker and certainly had the audience (myself included) gripping to the edge of their seats from start to finish. Definitely not one for the timid, nor would I say it was suitable for anybody under the age of twelve due to the adult nature of some of the scenes.

The tour started in Leeds at the West Yorkshire Playhouse on 5th September 2015, moving onto Nottingham and then Manchester before opening in Sheffield last night. It plays at the Lyceum (Sheffield) until Saturday 24th October, before taking a seasonal break and then moving onto Edinburgh in March 2016, it plays its final venue at London’s Sadler’s Wells Theatre from 24th May 2016, playing its final performance of the tour on the 28th May.

Tickets for Sheffield venue can be booked via the Box Office on 01142 496000. For more information about Northern Ballet, and to see their full list of upcoming shows (including Madame Butterfly and Wuthering Heights - both shows I would give anything to see!), you can visit their website at www.northernballet.com 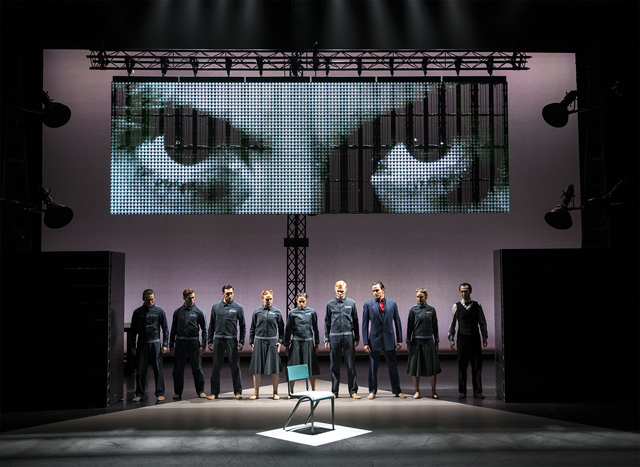