Mixing physical comedy, clowning, juggling, storytelling and slapstick, this family-friendly show from Lost in Translation Circus is inspired by Roald Dahl’s The Misfits.

Lost in Translation is UK based with a multi-cultural membership with strong links to Belgium Italy and Australia and performers originating from Italy, France, Ireland and Australia. Founded by circus space graduates in 2006 as an acrobatic duo, the company has toured widely throughout the UK and Europe ever since. Transformed into a full-blown ensemble in 2011 the company moved to Norfolk in 2013 to become company in residence with Seachange Arts where they run the circus education program.

The Hogwallops are a family who constantly bicker, scheme and play practical jokes! They live in a chaotic crazy home that is more like an adventure playground where the ordinary always becomes extraordinary.

Every day activities are extreme, with simple tasks such as washing becomes a flying aerial trapeze, making a cake for granddads birthday is the whole entire storyline based on the sacred Banana (slightly strange but so strange it becomes funny). With lots of laughs and acrobatic stunts that will leave the whole family entertained.

Thrillingly spectacular circus skills blend seamlessly with physical comedy, clowning, juggling, theatrical storytelling and slapstick in this colourful, loud and funny dramatization of the domestic adventures of a chaotic, dysfunctional family of misfits.

A treat for the eyes and ears with thrills, gasps, laughs and drama there’s plenty for both adults and children to enjoy.

Each member of the family displays their own unique and impressive skills during the show: terrifying acrobatics, beautifully choreographed trapeze work, strength, comedy and juggling. As individuals they are good, but it is when they come together as a group they are at their most impressive, every move perfectly planned and timed to ensure both safety and entertainment. 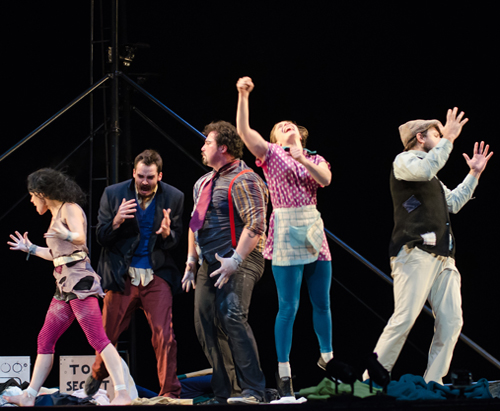