It is often said "where there's a will...there's a relative".   This play is testament (get it?) to that.

This is a story of how the death of a relative can bring out the worst in some people.   The theme of family runs all the way through it.

The story follows three siblings over twelve years.   Both their parents pass away and they are left to argue over their respective inheritances.   Two of the siblings, Jenny and Bobby, are particularly mercenary and unlikeable.   The character who has our sympathy right from the start is Michael, the adopted son.   He is not a blood relative but he cares more for their parents than either of the other two.

The play is in three acts and begins with the siblings meeting at the hospital where their terminally ill father is dying.   It is the first time that Jenny and Bobby have visited him.

There is no love lost between the three of them.   Both Jenny and Bobby are unlikeable, discussing inheritance and how much they will receive.   They are only too keen to point out to Michael that he isn't really family as he is adopted so by rights, he shouldn't really be entitled to anything.

Jenny goes in to see their father and comes back in tears and extremely upset - we assume the worst has happened - and for her and Bobby it has:   their father has told them that there is only £5000 left of their inheritance as it has all been spent on his health care.   They are more upset about this than they are about his imminent death.

The second Act takes place in their parents' home six years later.   Their mother is now in care.   Only Michael has visited her.

The tension builds as the potential sale of their parents' house is discussed - Jenny and Bobby pressing for this, Michael refusing to sign the papers as the house has strong emotional ties for him.

Unfortunately, their Uncle Keith blurts out the fact that their father left all his money to Michael. A fight erupts between Michael and Bobby - this was so well done, it was actually quite uneasy to watch.

The final Act is back in hospital - Bobby is the patient.   We learn that he has taken an overdose of cocaine and vodka but that something more sinister has been found by the doctors - lung cancer.   Jenny is visiting him when Michael arrives - in a turnabout, Jenny is now the regular visitor and Michael the one who has been too busy.

They ask Michael if he will provide the remaining £29,000 of his inheritance to pay for private health care for Bobby "because you're family".   He explodes with rage (extremely well acted) and refuses. He explains he has lost his job and he will subsequently lose his house.   His £29,000 is all the money he has and he will give it to them if there is no other way of paying for the treatment but it will leave him with nothing.

Bobby is told by a doctor that he can go home and it is revealed that he does not have lung cancer. Yet again, he and Jenny have sunk lower than low and it was all a scam to get back what they viewed as rightfully theirs.   Audible gasps from the audience at this point.

A beautiful twist in the tale is that Michael has not lost his job after all so he will retain his inheritance and Jenny and Bobby have shown their true colours (not that they were very well hidden in the first place).

Although this is billed as a black comedy, it is a bit too true to life to be really funny as it highlights the less savoury aspects of human nature. It is astutely written by Reuben Johnson (who played Michael) and very well acted by all concerned.   We see Michael's character change and become stronger over the years until he is eventually able to stand up to the other two and manipulate them into revealing how low they are prepared to go.

I found Reuben Johnson's acting was at its best when his part was emotionally charged as he conveyed the extreme of emotion very well - it was slightly less convincing when he was speaking calmly and he did stumble over a few words from time to time.

Jenny (Victoria Brittain) and Bobby (Andrew Brock) are very believable as the vile brother and sister and right from the start, it is clear that it is them against Michael and they don't truly regard him as part of their family - except when it suits them financially.   Andrew Brock may or may not be pleased to know that he is totally detestable in the role - so job done!

This was a relatively short play - 75 minutes - yet it was very compelling and I really wanted to find out what was going to happen.   All the actors were credible and their interaction very believable. There were some laugh out loud moments (Jenny telling Bobby a bedtime story of "The Boy who cried Paedophile!)   It also had a very satisfying ending (I think we always want bad people to get their comeuppance, don't we).

They received a well earned standing ovation.   I very much look forward to what they do next. 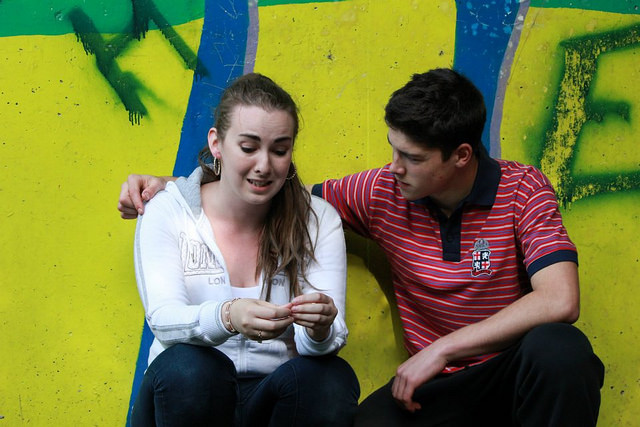