Over 125 years since Swan Lake was first staged in Moscow in 1877, it continues as the most universally popular of classical ballets, both for its music and its story. Its origins may have been in a children’s entertainment devised some years previously among the family and friends of Tchaikovsky’s sister, Alexandra Davidova. The four-act ballet was commissioned by the director of the Moscow Imperial Theatres, Vladimir Petrovich Begichev, who seems to have mapped out the scenario in association with the dancer Vassily Seltzer. It is this on which Tchaikovsky based his composition and Julius Reisinger his first choreography.

Following the beautiful long overture, Act One opens to a stunning Gothic castle scene with stunning medieval costumes and mourners in black velvet following the death of the King. The (Kings) coffin is carried on, with his crown placed on top.

Following the Kings death. His son, Prince Siegfried (Tyrone Singleton), will soon be crowned King and therefore must marry. He fears for the loss of his freedom which marriage would cause and has no real desire to marry. On his 21st birthday his faithful companion & equerry Benno, arranges an evening of entertainment to divert him. Prince Siegfried is presented with a crossbow by a group of his friends, but in the middle of these celebrations the Dowager Queen (Marian Tait) arrives. She is shocked by the frolics while the court is in mourning and reminds Siegfried that he must choose a bride from three Princesses who will soon be attending a grand reception. After Siegfried has danced amongst the guests, Benno attempts to cheer him up with the help of two courtesans. When the dancers have gone, a flight of swans passes and Benno suggests that Siegfried try out his new crossbow. They depart in pursuit.

Following the end of Act One there is a three minute pause where the audience are expected to remain seated - which was indicated in flyers given out to ticket holders - however many obviously failed to read this and attempted to get up to leave the theatre - despite Act One only lasting thirty-two minutes. Luckily theatre staff were on hand to resolve this and were quick to stop anybody leaving the auditorium.

Act Two opens to the lakeside scene by moonlight which is simply stunning! Although rather Gothic and a little eerie it was also inviting and relaxing. It made one want to dive into the lake! At midnight Baron von Rothbart, (Jonathan Payn), an evil magician, awaits the arrival of the Princess Odette (Céline Gittens) and her companions. He has transformed them into swans and they can only regain human form between the hours of midnight and dawn. Von Rothbert hides when Siegfried arrives. Left alone, Siegfried spots a swan, which, to his amazement, changes into the beautiful maiden Princess Odette. She explains that her curse can only be broken by the undying love of one whom has never loved before. Rothbart appears and the Prince attempts to shoot him, but Odette explains that if the magician dies the spell can never be broken. Dawn approaches and the Prince declares his undying love and swears to be true to eternity. Odette promises him that she will visit him the following night at the castle.

Act Three - my favourite act of the evening - purely for the stunning stage set and costumes, opens to the ballroom of the castle. Stunning candelabras hang from the ceiling - Gothic Tudor style wooden circular which look hand carved adorned with flickering candles and stunning period style costumes - my eyes kept switching between the variety of dancers and precise footwork to the beautiful costumes and breath-taking scenery. At the grand reception three Princesses are presented before the Prince and dance for him. However, besotted with Odette, his thoughts are elsewhere. A fanfare announces the arrival of two uninvited guests; Rothbart (disguised as an ambassador) and his daughter Odile, whom the magician has transformed to look like Odette. The Prince is fooled by this and believes that it is indeed Odette. Odile and the Prince dance, whilst Odette, keeping her promise, appears at the window, but the Princes’ attention is distracted by the magician’s spell.

Act Four brings the audience back to the lakeside where the Prince first fell in love with Odette. Siegfried arrives and begs for forgiveness for breaking his vow but sadly Odette feels she cannot forgive him. Rothbart creates a storm to divert the pair from reuniting but deciding they cannot live apart, the pair decide that they will die together and throw themselves into the lake where the spell is broken and the lovers are united in a world of eternal love.

The programme shows a variety of performers in different roles, and as on arrival the audience were also handed a double sided A4 piece of paper stating the date and cast for that particular evenings performance. I particularly loved this as it shows that (Birmingham Royal Ballet) are giving the opportunity to many of their talented performers to take the Principle roles at some part of the tour. The tour opened this evening at The Lowry for four nights, moving onto Birmingham Hippodrome (which is adjacent to BRB) on the 28th September and ending in January 2016 at the Mayflower Theatre, Southampton. Although not quite a sell-out show for opening night, there were few empty seats and the cast earned a standing ovation at the end and a roaring applause from the audience. Ironically the Company are back at the Lowry in March 2016 for their performance of everyone’s Shakespearian classic Romeo and Juliet, which, after tonight’s enchanting and magical performance I simply cannot wait to see their interpretation of my favourite High School classic.

The music is well known by most but made even more spectacular by the stunning live orchestra, breath-taking scenery and stage design (Designs: Philip Prowse, Lighting: Peter Teigen), beautiful costumes and of course simply mesmerising choreography (Marius Petipa, Lev Ivanov & Peter Wright). The majority of the scenery, costumes, wigs etc are courtesy of the Royal Opera House with additional scenery painting by Richard Nutbourne, additional costumes by Jenny Adey. Keith Bish and co. The show takes the audience into a magical fantasy land and other than the odd cough at appropriate times (now that autumn is upon us!) the audience were deathly silent, completely memorised by what is such a magical performance. Surrey born Tyrone is perfect as the dashing Prince; having trained at the Arts Educational Centre in Tring, Hertfordshire and at the Royal Ballet School, Tyrone joined Birmingham Royal Ballet in 2003 and was promoted to Principal in 2013. Trinidad born Céline Gittens (Odette) grew up in Vancouver, Canada and trained with her mother at Vancouver’s Goh Ballet Academy and joined Birmingham Royal Ballet in 2006.

This performance had me hooked from the second the conductor created that first note. Grab your tickets now! 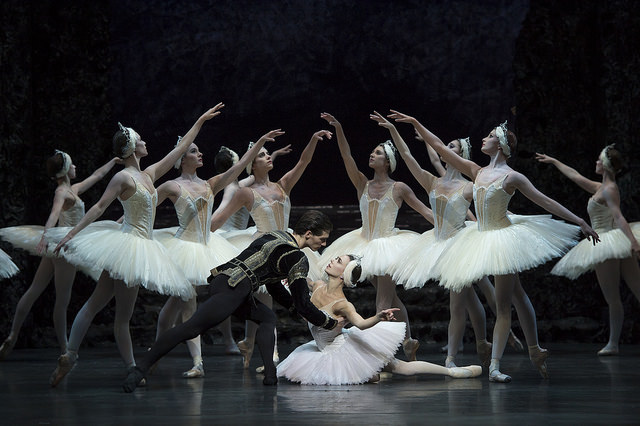