It's amazing how the simplest things can be the best! Boris and Sergy's, our two hosts for the night take a visit to The Lowry for a night full of entertainment and traditional tabletop theatre. Made of old leather this pair make such a fun and exciting duo.

When the show first started and there were three people channelling their energy into one puppet and focusing to make them come to life I thought the show was going to be hard to appreciate. However within a matter of minutes I was completely drawn to the pair and even forgot they weren't alive. They're wit, huge egos and shiny personalities made for some brilliant theatre.

We was taken on a journey throughout the show and witnessed a lot of comedy but also some serious issues. The puppeteers controlling these puppets had such a hardwood that they excelled at, the concentration and teamwork was very effective. A lot of the show was actually carried through audience participation which led the show to its next section.

One of the main things we learn in this show is that Boris and Sergy just need to be loved and accepted, being plain puppets that don't actually fall into a particular species means they have no place and only each other.

Towards the end of the show Boris and Sergy realise that selfish acts get them nowhere as there puppeteers stop moving them. The pair are at their lowest in the knowledge that they are not independents. Boris has made the ultimate bet in a game of poker so the pair’s next quest is to escape the dark ones. Physical theatre can be hard for an actor to achieve but doing this with puppets I can only imagine is a hard task. Every move the puppets made were there for a reason and had a purpose which helped us believe it more.

Flabbergast Theatre have had sell out tours in the UK and Australia and I really hope they continue with this production as it's a fantastic example of what can be done with next to nothing. A little imagination goes a long way so I would highly recommend clearing your mind and preparing yourself for a huge adventure. For more information on show dates visit www.flabbergasttheatre.co.uk. 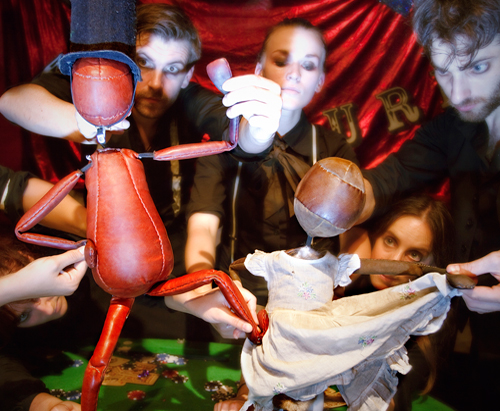