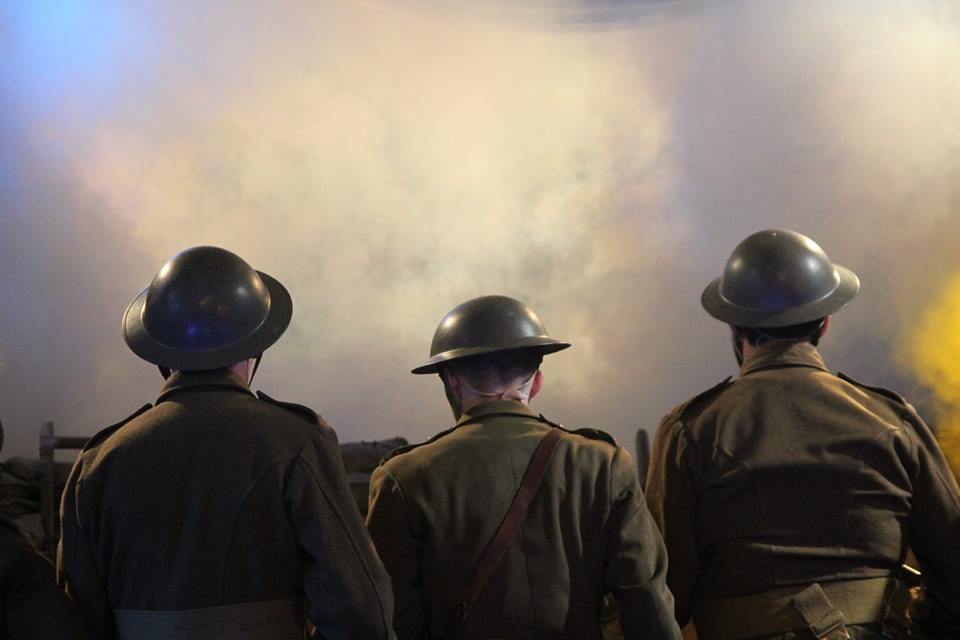 This show has gained a lot of attention and promotion and it is no surprise. Boasting a world premiere and commemorating the centenary of the Great War, Ollie Mills and Rachel Mann's masterpiece is beautifully poignant, thought-provoking and utterly authentic. I sensed from the first scene that I could relax, rest assured that I and the rest of the audience were in for a treat.

The Tree of War ingeniously intertwines a little girl's campaign to save the oak tree (the type is significant) in her garden and the reminiscence of a war veteran who is lead to relive such experiences to satisfy his granddaughter's inquisitiveness. We are taken on a journey from 'normal' life pre-1914, to enrolment into the service at just 18 and the life in the trenches.

Maddie Corcoran's young Anna opens the show in fine voice (alternating with Lucy Smith) with her grandpa Albert (Mike Law) as a form of prologue before the grand introduction it deserves, in the form of the show's logo projected on the rear of the stage, accompanied by the wonderfully written score kept in check by Musical Director Sam Holmes and the band.

We are taken back to Burnage, where the show is set - between scenes in the trenches - where we meet young Albert, or more favourably known Bert (Alex Cosgriff); his best friend, partner in crime and soon to become comrade Greville (Sam Gilliatt); Bert's mother (Beryl Nairn) and girl-next-door Edith Chadderton (Rebecca McAuley), along with the other ladies of the village, all of whom express so much chemistry.

After the local lads sign up to serve their country and 'Do Manchester Proud' - similar to the way this show is - we are taken to the trenches and introduced to the other soldiers in one of a few more light-hearted scenes. They are closing duo Reg Smith (Joe Clayton) and Harry Cooper (Will Spence), Glaswegian Dougie McBride (Jamie Rahman), young Stockport-born Davey Greybridge (Alex Pollard), the boy who literally works his name Alf Barber (Tom Fawcett) and later newbie Frank Owen (Tom Davidson) who we later discover knows the comical duo for an unforgivable past. Each character holds their own but contributes to the poignancy, realism and believability of the piece.

With slight similarities, musically, to Les Misèrables and scene-wise to War Horse, the show is brilliantly preformed and well-lit, making you feel part of the bigger picture along the way with the help of the lighting of the whole church. Yes, even I had to keep reminding myself it was in a church. It just shows that even the best shows can be performed in a slightly more unusual, yet fitting space.

Musically (it is a musical after all), as well as the nice dynamics of duets, solos and chorus pieces, a few of the many highlights for me were the comical entertainment routine, Dougie's patriotic ode to his homeland which featured the dancing of Eilidh Pollard and spearhead if the Women's Worker's committee supporting those on the frontline Margaret Blaxley (Barbara Purvis)'s 'Monumental Change'.

A theme throughout is solidarity and this is key to sanity of those whose loved ones had been sent or volunteered. This is beautiful to see between Bert's mother and Edith and maybe more significantly Bert and his best friend come Corporal Greville who struggles with the control whilst remaining positive in front of the troops. This is key to the end of the show and you will hardly be able to prepare.

With a comedy and light-heartedness taking us through, quite nicely at times in the trenches, there is no escaping the powerful reality that war could embroil our friends, our neighbours, our loved ones and affect anyone who is connected, directly or otherwise with its path. The cliché that people said and believed that "It'll be over by Christmas" is alone so powerful but some so too are some of the well-written lyrics of the songs. Notably "Will ever he be called a hero" continuing to "... name etched into stone" providing a double meaning to the unknowingness of whether they will survive or return.

The perfection of the show's flow is to be commended, with timing being the key to dynamics, particularly during the reading of a letter written by one of the soldiers who is writing home. Even a single line jerks a moment of realisation for another character, shared by the audience. It would be tragic if this want to be the only outing if this show.

I will conclude, if I may, with a line from the back end of the show in the hope that the 'secret' of the tree's symbolism and origin help you recognise just how special this show is in the history of commemorating such a momentous event in which so many served and were lost for us.

"Live not for war but for peace. Not for yesterday but the hope of tomorrow."

The Tree of War runs at St Nicholas Church in Burnage until Saturday with two performances on the final day. Tickets can be obtained through www.ticketsource.co.uk/thetreeofwar or by calling 0161 975 5085.