Dead Dog In A Suitcase (And Other Love Songs) @ HOME

Although it has been open since May this was my first visit to HOME and I cannot remember ever being so impressed with a new building. As a complex it has everything that an Arts lover could possibly need, a cutting edge Art gallery, two theatre spaces, several cinemas and perhaps most important of all several bars! It really is a wonderful addition to the Cultural life of Manchester and long may it continue to be so.

For their first season, HOME has invited the highly acclaimed Cornish based theatre company, Kneehigh to perform their much praised production of Dead Dog in a Suitcase. Loosely based on John Gay’s The Beggar’s Opera and with occasional nods to Brecht’s The Threepenny Opera and theatre director, Joan Littlewood, to whom the production is dedicated, this brilliant musical satire delivers a forceful and hefty theatrical punch. Kneehigh Theatre’s past credits, including the ground breaking, Brief Encounter, rank amongst the most successful productions of the last ten years and Dead Dog In A Suitcase continues in this rich vein.

Sticking closely to John Gay’s original plot, the show explores through satire, comedy and music, the twin themes of corruption and injustice. Although The Beggar’s Opera, is almost three hundred years old, in this version by Carl Grose, the updated story of a criminal being hired by a corrupt Mayoral candidate to kill his rival, has an edge and a freshness to it that feels very much in keeping with the present times. In preparing to direct the show Mike Shepherd admits to having watched all of TV’s Breaking Bad and the influence of having done so is clear to see.

A cast of wonderful actor-musicians, one of the best ensembles I have seen for some time, draw on an impressive array of physical theatre and musical skills to conjure up a variety of grotesque and strangely appealing characters, including master criminal, Macheath, (a superb Dominic Marsh) and the deliciously, scheming Mrs Peacham, (a tour de force from Rina Fatania). Showing no fear for heights, the cast climb and tumble all over Michael Vale’s excellent scaffolding clad set.

One of the most impressive features in the show is Charles Hazlewood’s musical score which ranges from traditional folk, to Ska, the music of Ian Drury and some exquisite choral singing.

If you have a ticket for this show count yourself extremely lucky, if you don’t start queuing now or try and catch the show on the rest of its tour. It plays the Liverpool Everyman and Playhouse in November.

From the wonderful interior to the extremely helpful staff, there is a lot to enjoy about HOME and with a packed programme on offer over the next few months; I for one will be making as many return visits as I can. 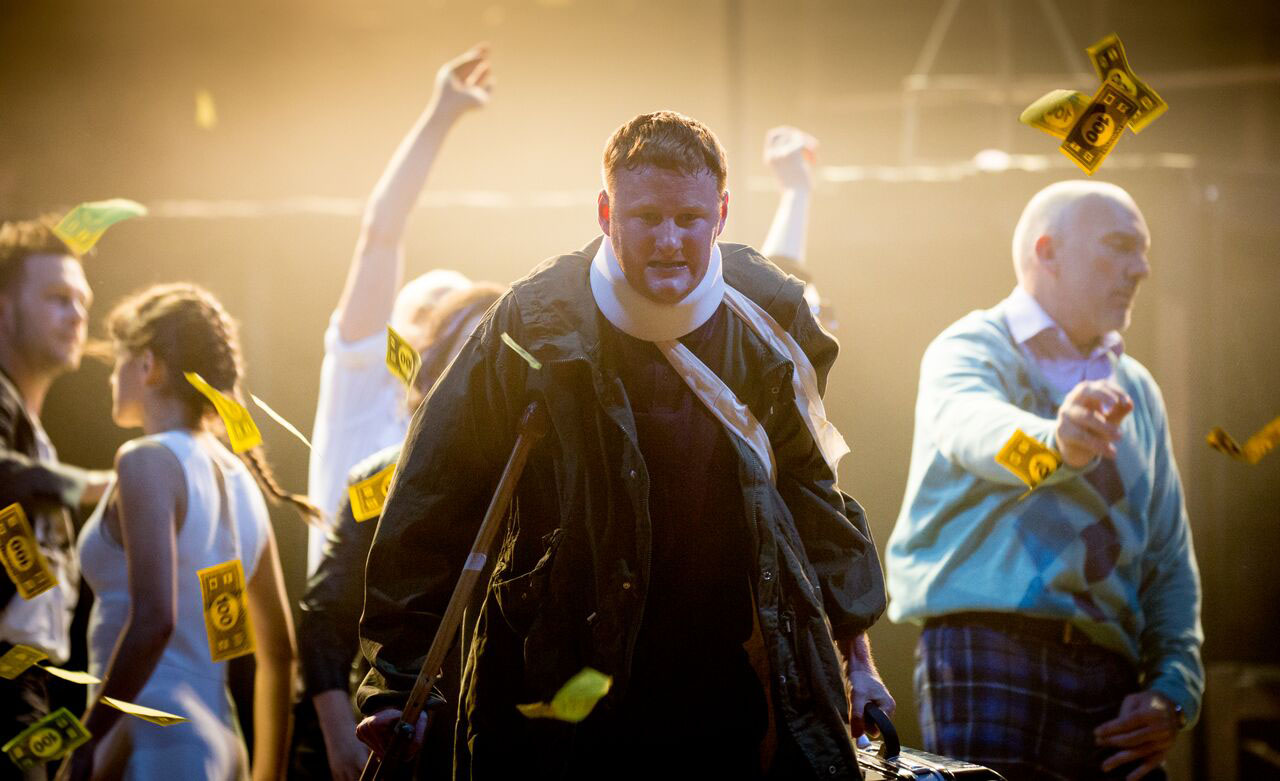