A Paciﬁsts Guide to the War on Cancer - HOME, Manchester

How can you possibly do a musical about cancer? That is what every audience member and critic in the country is screaming at this production. Musicals are all so happy and uplifting it just doesn’t make any sense. However with the talented writer and director that is Bryony Kimmings armed with a highly skilled cast this musical was pure perfection.

The show follows the stories of real cancer patients and how they are dealing with their new life in the Kingdom of the Sick. The opening number is the only one not set in the hospital. It features all the cast rushing around, playing multiple roles and getting on with their busy life, with no time to think about cancer. The audience instantly relates to this, grasping their attention and sending waves of goose bumps around the room. The rest of the production is set in various locations in the hospital; waiting rooms, chemo suites, doctor’s ofﬁces. It follows the story of Emma (Amanda Hadingue) going through the 5 stages of grief as she waits on tests from her little boy. The audience are taken on this journey with her of denial, anger, bargaining, depression and acceptance through learning about the lives and losses of the other characters. 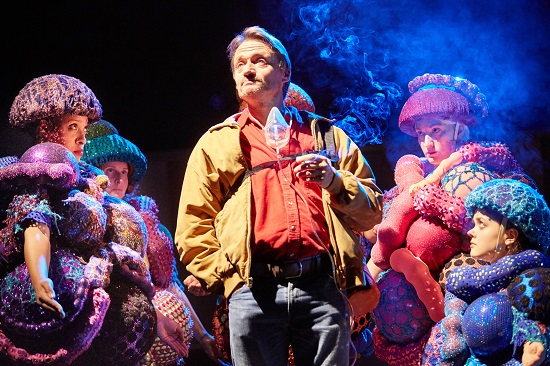 The production explores in great depth the metaphors that are used in day to day life regarding the illness. This is brought to life with the use of amazing costumes and laughable songs such as “Even c***s get cancer”. This makes the audience roar with laughter at the realisation of the ridiculous things we do and say to skirt around the topic. The personiﬁed character tumours are used to represent how cancer is closing in around our characters. Giant inﬂatable ones are even used to slowly ﬁll the stage over the course of the show.

The lighting, set and sound effects are all incredible. The world that has been created is mesmerising. iPads are even used at one point to light the actors faces as they are all searching for answers. The most remarkable part of the show in the last 20 minutes when Emma ﬁnally accepts the diagnosis. Bryony comes on the sound system and states “Now here is where we struggle with the rest of our musical”. From then on the atmosphere changes. The cast stand in a circle and the real interviews are heard with each actors miming along to their character. This incredible technique really hit home about how these people were real and we’d been witnessing the day to day struggles. The cast then go on to each say people they have lost due to cancer and invite the audience to join in. 1 in 3 in the theatre shouts names out, there is not a dry eye in the house.

Whether cancer is your worst nightmare or you're lucky enough to have never been affected by it you cannot miss this production. It is hilarious and heart-breaking. Your thoughts, ideas and presumptions about cancer will be challenged and you will leave the theatre a different person. The audience became one and somehow were all brought together by the pain and loss of this terrible illness.

This topic needs to be talked about and this musical is the perfect way to do it. It will run for a long time and go down in history as one of the greats. It is simply unmissable. You want to know how there can be a musical about cancer? Go and watch it, you won’t regret it.