Tommy Cannon and Bobby Ball are a comedy duo, working together for 54 years appearing on television for the first time in 1974 on 'Wheeltappers and Shunters Social Club' and going on to getting their own show 'Cannon and Ball' airing in 1979. They enjoyed success with further yearly series until 1988. In recent years they have toured theatres and appeared in several pantomimes.

The Dressing Room is written by Ball and is described as part play, part variety, or as Ball likes to call it a 'play-riety'. With fellow comedians Stu Francis and Johnnie Casson starring and set in a theatre, it promises an insight into backstage gossip and what they think of the audience and other things that an audience would not usually get to see that go on backstage before each performer takes to the stage.

The stage has a very simplistic set of white door at the back, (it wobbled every time someone used it) another free standing door labelled 'stage' to the side and a list of acts due on attached, a dressing table and stool with the traditional light bulb surround. 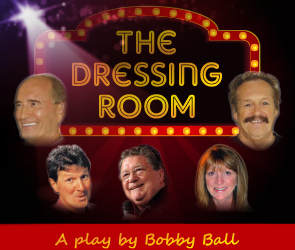 The opening scene is a comedy sketch revolving around the wearing of a wig by Cannon and being ridiculed by Ball over it. Stu Francis then enters wearing a gold lamé suit playing the character of 'Billy Tents' with a catchphrase of 'Life is for Laughing not just for Living... oooooh!' and encouraging the audience to repeat back, which does start to irritate with over use. Francis was a presenter on Childrens TV Crackerjack 1979 - 1984 with a puppet 'co-host' Basil Brush. His main catchphrase was ' Ooh I could crush a grape'

The three are then joined backstage by comedian Johnnie Casson as 'Jimmy Laugh' who is far from a barrel of laughs and carrying around an urn of ashes. Casson was a regular on the cabaret circuit before appearing on various TV shows and made several appearances on the Des' o' Connor Tonight show.

Billy Tents is the camp compère for the evening and is proud of the name he thought up, Tents - Camp...get it? He is first to go through the stage door and after a short exaggerated camp performance and drawing the audience into his act, he introduces Jimmy Laugh to the 'front of stage' and the miserable backstage Jimmy transforms into the funny guy. (This I get, depicting how no matter how an act may feel, the show must go on) There is then 30 minutes of stand up comedy from Casson taking the play into the interval. For me Casson is the saviour of the show tonight with his one liners and delivery.

The second half is based almost entirely around Cannon and Ball who interestingly perform as Cannon and Ball and not with different character names as the others do. With the usual picking on audience members and banter between the two they brought cheers when Tommy pulls on his braces with his catchphrase 'Rock on Tommy'. There is a banal and too long imaginary ping pong ball game before they performed an amusing version of 'the Ballad of Molly Malone'.

Overall I did not see this show as a play as such, or variety show, (you can hardly call 4 comedians variety) It is simply a few sketches before 3 comedy acts each perform as they did in the 1980's in their own style, when they were all at the top of their professions. Sadly much of the content was from those days too. However the audience did not seem to mind the predictable material and I suspect most have been fans of Cannon and Ball for some years and are part of their following. At the end of their performance it appeared the 'play' part was totally forgotten about as there was no return to the backstage scene.

Tonight the laugh was on me....... I was expecting a sit-com play set mainly back stage with maybe a few ' onstage' performances, The Dressing Room is simply a show of stand up comedians with a few extra lines thrown in. There was a very amateurish feel to the back stage scenes and although great comedians they all may be, comedy acting is an entirely different case.