I am being gently coached to shout ‘GET OUT OF THE WAY JOHN’ in my best Sarah Connor.

We are all invited to do so. It’s cathartic. This is the drum beat to a joyously anarchic hour in the company of Andy Roberts and James Baker as they affectionately, with our participation, put on a very personal, but true to source, staging of the film Terminator 2.

It helps if you, like me, enjoy James Cameron’s classic apocalyptic vision of the future. ITV4 had kindly obliged with a timely showing on Tuesday night. Seek out the first (one of the best ‘B’ monster movies in my humble opinion) and then this sequel and I hope you will not be disappointed.

HOME have the first film on show this Saturday, as a companion piece to Bootworks Theatre’s production, to help us on our Terminator journey. 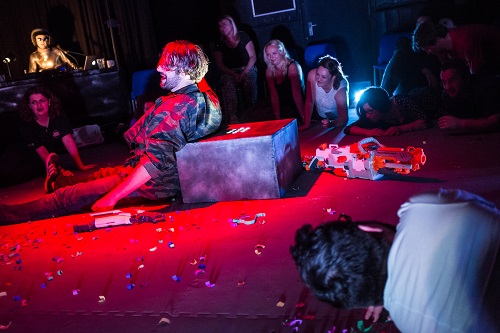 James Cameron has a knack for a heart pounding sequel with a ferocious enemy at the gates, and, strong heroines. See Aliens. Terminator 2, for a 1991 film (that year’s highest grosser) has special effects and stunts that have aged well, and, like our hosts is a rich field of action one liners. As is the Hollywood career of one Arnold Schwarzenegger.

I was 19 at the time and still remember the cinema hush and gasp as the imagined apocalypse is unleashed.

In essence we are doomed. Man becomes obsessed with technology. Super computers become ‘self aware.’ Skynet, our self created nemesis, sees mankind as the problem and sets out to eradicate us with a robot army. The complication is in our future, man and woman do not want to go quietly. A rebel leader arises and Skynet decides that the best way to erase this threat is to wipe out his past. Time travel.

The pulse and thrills of the first two films is the unrelenting nature of the chase as various production line assassins are dispatched to destroy firstly his mother, Sarah, and then the young John Connor.

At a time of national tension and captains jumping ship there is something mind liberating about sharing in one man’s obsession with a film, that for Andy, formed the soundtrack to his teens and twenties. A film you got the sense he lost himself in when overwhelmed with the burdens of adolescence, and, weight of expectations as a young man. I could relate to that lack of a plan, loss of a blueprint to help us map our lives which Andy refers to. In stark contrast his filmic alter ego, a 10 year old, John Connor, has a far weightier burden to carry as the potential saviour of humanity.

As you see John in the film trying to rebuild a relationship with his mother, Sarah, and seek a father figure, you too see how Andy, temporarily derailed in his youth, sought solace in themes of purpose, sacrifice, loss and love. Maybe we are all seeking certainty, a pattern, to make sense of our lives in senseless times. Why do we obsess, what voids and insecurities are we trying to fill and explain? Ok, enough inner analysis and Brexit angst.

It’s moments of poignancy and Andy’s open heartedness, aided and abetted by his MC, Jim, his Mum, Dad and 3 year old niece providing voice overs, that makes the show. The leads clear affection for the source, and, sharing of jammy dodgers in their ‘home brew’ style cinematic workshop, is infectious.

If you are in need of a pick me up, as opposed to pick apart, catch them for two more nights here in Manchester at HOME. If you routinely drop film quotes into the most mundane of situation, this is for you. If not, still go, role play with Nerf guns, remote control cars, practice slo-mo foam bullet dodging, feign injury and grin widely, for it’s excellent all action mind and body therapy.

The Many Doors of Frank Feelbad