Over the many years that I have been visiting The Royal Exchange, I have seen some truly outstanding and excellent theatre there. I have also seen some, though thankfully not so many, which simply didn't either inspire or entertain, leaving me cold and disappointed. Tonight's production of The Mighty Walzer sadly fell into the second category. Of course, I am only one person with one opinion and all art is subjective; however, judging by an audience of maybe only one third capacity, and the noticeable number of interval walk-outs this evening, perhaps I am not alone in this thinking.

I am trying to pinpoint exactly why this play simply did not work, and without knowing the novel from which this piece has been adapted, I am not at all certain. Although my gut reaction here would be to say that it was Simon Bent's adaptation of Howard Jacobson's novel which must take the majority of the flack. The story is inconsequential and despite some really quite witty lines, this script simply didn't sparkle, and was unsuitable for an in-the-round presentation. I think also the biggest disappointment was having a big build-up of "see ping-pong played in the round" which never actually happened at all since all the ping-pong sequences were mimed. (And other actors voiced the noise of the unseen ball hitting the bat and travelling across an invisible table.)

The play was very slick and fast-paced. Director Jonathan Humphreys made sure of that; but one thing neither he nor the actors could get away from was always being totally aware that they were playing to an audience all around them, and so made very unnatural and awkward movements once on stage making sure their backs didn't stay in one place for more than a couple of seconds. The play was also extremely 'samey'. It is a gross misjudgement on the actors and the quality of their acting to say this, but hopefully you will understand what I mean by writing that once you had seen the first five minutes of the play you had seen it all. The action, the set, the themes, the play as a whole didn't move and develop, and the journey the actors took didn't change much from start to finish. Very much like the lives our main characters lead - aspiring to greatness but actually taking a downward spiral and ending up penniless and nowhere, this script sadly seemed to follow the same trend. 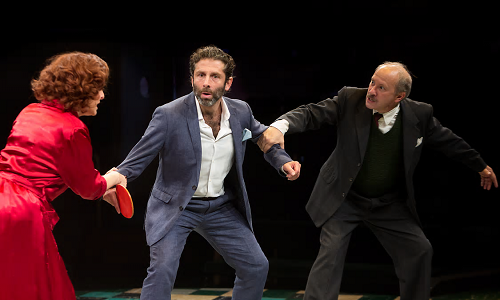 It was also a rather strange premise to accept. An actor, in his fifties, walked on stage, alone and started talking, narrating his life story. As the characters of his childhood are mentioned they came on the stage and interacted with him. However, he made no attempt to be the child, or the youth, he stayed the fifty-odd year old narrator. Strange, and it took some time before we were used to this. And although he is the protagonist in his own story he remained detached or at least semi-detached from it the whole time.

The set, designed by James Cotterill, sadly was also one of the worst sets I have seen for a very long time in this space. The main acting area was given a circular Formica tiled plateau in greens, blacks and creams; and sitting where I was on the first gallery was most distracting and eye-catching. It was too busy and too much, taking my attention from the actors and action happening on it. It stayed the same throughout, no matter the location of each scene. All this minimalism, and then a very large and 'real' van complete with bijoux, trisch-trasch and kitsch was rolled on for a very short space of time, adding nothing. It too could just as easily have been mimed.

Analysing what I witnessed this evening, I cannot discredit the actors at all. They played their parts according to the script and directors wishes, giving actually really very good performances; and, despite the nature of the play, making them quite believable. The archetypal Jewish bickering and rowing between Oliver's parents, and the inevitable making up showed genuine tenderness between them. (Jonathan Tafler and Tracy-Ann Oberman). The nerdishness of the ping-pong players, (Daniel Abelson, Ilan Goodman and James Parris). The cockiness of the worldly-wise Teddy-boy Spiv, Sheeny (Joe Coen). The shy, demure and a little bit dotty twin aunts Dolly and Dora (Ann Marcuson), etc. All of this good and worthy. And Elliot Levey plays the protagonist, the 'Mighty' Oliver Walzer [yes - it's a surname, and not spelled with a 't' as I had been doing previously, wrongly thinking it was a fairground ride or a Viennese dance ] competently and smoothly with a laid-back ease, took us on his journey through his adolescent years growing up Jewish (but never really noticeably so) in Salford in the late 50s, to his going to Cambridge (the first in his family), to finally going to live in Venice and work as a tour guide.