Hope Mill Theatre is rapidly becoming one of my favourite theatre venues, with its industrial chic aesthetic, welcoming staff, and versatile theatre space. It seemed incredibly fitting that Shalalalalee, the latest production from playwright and director (and long-life Manchester City fan) Bill Cronshaw, in collaboration with Dreamshed Theatre, would be performed here.

Shalalalalee charts part of the textured history of Manchester City Football Club, focusing on the 1960s’ turbulent lows and heydays coupled with mentions of the demolition of Maine Road in 2003. Again, Hope Mill becomes a poignant venue for this tale, as the theatre is within view of the new Etihad stadium. 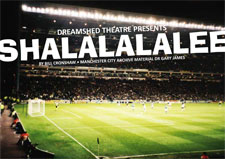 The play was, as I gathered from the mutters and chuckles surrounding me, a deep nostalgia trip for many in the audience as 1960’s anthems and old memories surged through the performance space. Characters such as cleaners, security guards and program sellers, portrayed by Bill Cronshaw, were familiar even to someone as young as me through my own visits to football matches. John Martin Stevens also did a stellar job at portraying a variety of amusing and interesting characters.

The play trundled along at a gentle pace, with obvious yet still funny jokes peppering the storyline, as Tony (Kieran Mortell) and Janice (Sarah Hancock) discover the 1960’s, football, and love. I do feel that perhaps a little too much time was devoted to the beginnings of the relationship, with the conclusion feeling rushed and sudden with little effort made to foreshadow the fate of the young relationship. Similarly, the characters of Tony and Janice could, at times, appear a little one-dimensional with the plot giving little time to their development, despite energetic and warm performances from the two actors. The characters appeared to have completely changed by the last scene, although this was a sudden switch rather than a gradual growth.

Nonetheless, the performance is sweet, filled with information (provided generously by City historian Dr Gary James), and an interesting delve into the Manchester City of the past. I would have personally liked to have seen at least one female character that was a genuine fan of the club, but the evening remained enjoyable and warmly familiar from hilarious opening to bittersweet and reminiscent conclusion.