The story is about two sisters, Agnes (Colette O’Rourke) and Edith (Tilly Steele), who join the women at Barnbow munitions factory in Cross Gates, East Leeds. It is set during the height of the First World War when men were conscripted to serve at the front. This meant the women had to do jobs men would usually do including work in a munitions factory. Both Agnes and Edith are fully aware of the dangers being munitionettes but the high wages offered opportunities and hopes they probably wouldn’t have got otherwise. Only for them and fellow women to eventually receive the truth the work brings and tragically with catastrophic consequences.

At the beginning opportunities and aspirations are celebrated with patriotic pride and to them what the war means. This is celebrated with song We are the Barnbow Lasses and their lured beliefs in ‘Shells, shells and more shells’ and that ‘Plenty of ammunition saves lives’. In time the atmosphere and attitudes changes among the women. Particularly when ‘duty proud’ Edith (Steele) questions ‘only good could come out of the war’ following the disturbing discovery of her and her workers being poisoned from the TNT and going ‘yellow’ after the doctor (Joseph Tweedale) attempts to conceal the truth.

One must admire the incredible staging by Mark Bailey; the well drilled choreography and co-ordination of music and movement which gives a glimpse of the workers’ livelihoods in the factory and its grim working conditions.   What poignantly sticks out is the enactment of the 1916 explosion and its devastation on the stage. This is combined dramatically with dim lighting, smoke, effects and thunderous soundscapes courteous of Bailey, Katy Morrison and Dyfan Jones. 5th December 1916 is a date to be remembered for Leeds’ largest ever single loss of life. 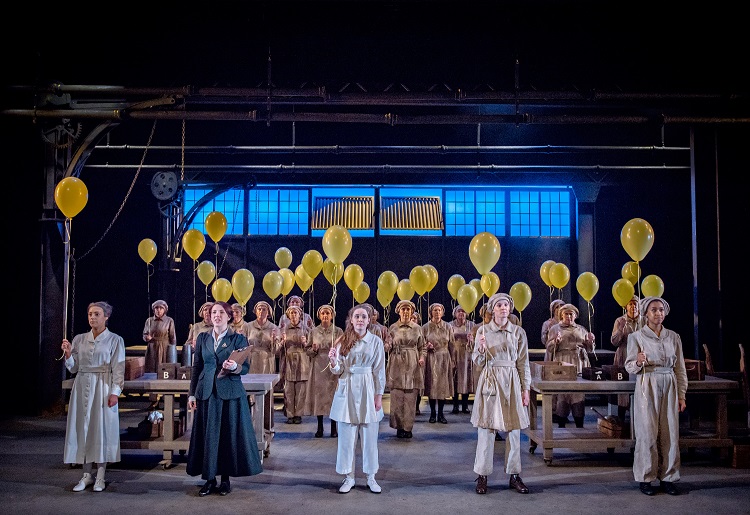 Alice Nutter (My Generation) brings honestly and determinedly her authorial presence to this story about the spirited brave women who risked their lives and initially believed this will make a better world. Only to unfold for them those social attitudes towards women in a post war society remained the same as before. In contrast to the soldiers, the women were unrecognised for their efforts and were expected to continue on with their prescribed lives just as before the war. In a similar spirit to the suffragettes, they fought for such rights including compensation and benefits but only to be dismissed from the factories and were unfairly accused of taking ‘men’s jobs’.

Barnbow Canaries doesn’t primarily commemorate the centenary of the Great War. Instead it focuses on the working class women who played their part in being ‘behind the man behind the gun’ but only receiving half the pay of the men and also the story remembers the almost forgotten Barnbow factory explosion almost a century ago.

An excellent production, under the direction of Kate Wasserberg, with a fantastic cast and talented creative team who portrays with equilibrium poignancy, expectations, disappointments and hopes with performance and songs – featuring catchy Barnbow Girls and the philosophical Pack Up Your troubles in your old kit bag which is supported by a chorus of women from the communities of Leeds.

At the end of the Second Act the cast touchingly releases yellow balloons to remember the 35 women who were killed in the 1916 factory explosion. Reflections are shared how women’s empowerment and solidarity have slowly moved on in the 20th Century; including the right to vote, the choice of profession, property ownership and optimism for the future. In conclusion draws ‘our history is her history’.