A woman stands in the middle of the stage, with two shopping bags in her hand. An expression of fear can be seen as she looks out towards the audience. Behind her is a large transit van, the catalyst of this unforgettable event. Its white container begins to pulse a white light, similar to that of a heartbeat. One by one members of the company, all come together on the stage, a collective of people from different backgrounds and costumes, as they all stare in fear towards the audience as the heart of the mighty behemoth becomes louder and louder. What follows next is a whole new and intriguing experience.

HOME and ANU productions come together to ask the question ‘where were you on July 15th 1996?’ The moment when the IRA parked a truck full of explosives on the corner of the Arndale and the devastating effect it caused. Though no one was killed it did however have an effect on both the city and the people living in and out the city centre. The award-winning company use this moment in time to tell a collection of intriguing stories around the basements and lower levels of HOME’s structure. This site specific labyrinth takes many twists and turns where characters with detailed and heartfelt stories about that day wait for us. ANU phenomenally use HOME as their playground, taking audiences back in time and into various locations. 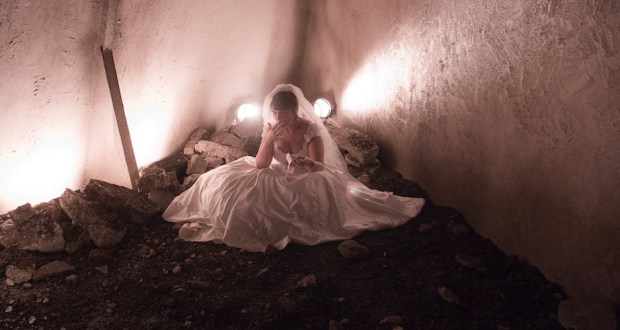 One moment we could be in a small flat in Altrincham where a young man is watching the TV about the events in the city and the year, a small but dark waiting room to a space full of broken glass and large rubble that reflects the destructive aftermath of the explosion. Though there were moments when you could hear the other performers in the other room, it didn’t take away the tension in the allocated scene.

The performances are another achievement that the collective display. Each character that the performers embody has a sense of realism and emotion, as if they have taken the memories of emotions and evoke them from an employee breaking down after seeing his workplace completely destroyed, armed soldiers taking cautious steps as they explore the selected areas, to an NHS nurse feeling ashamed of her Irish heritage. Each performer shines in both delivery and characterisation.

Though I was too young to remember the event, I felt like I taken back in time to a moment I had only little knowledge of. A time where through this shocking moment that shuck the foundations of this city, it’s people all came together in support and as the famous saying goes, what doesn’t kill you, only makes you stronger. It made me feel proud to be from a city. ANU Productions create another fascinating piece with strong performances and a creative detail that captures a moment in time. Using HOME’s underground to good use and adds an additional creative layer to the performance.