An Alluring and Tantalising Evening of Burlesque

Burlesque brings to mind a world of glitz and glamour, singing and dancing, laughter and good all-round entertainment and certainly the choice of the Epstein Theatre in Liverpool for this show was perfect as dating from 1913, its Art Deco interior offered the ideal backdrop to a show which mixes traditional vintage burlesque with a more modern neon twist.

Our host for the evening, Uriel Hart, with his over-sized cod-piece as one of his many costumes for the evening, warmed up the audience with a series of risqué jokes and got in among them to establish some initial rapport and direction for the show. 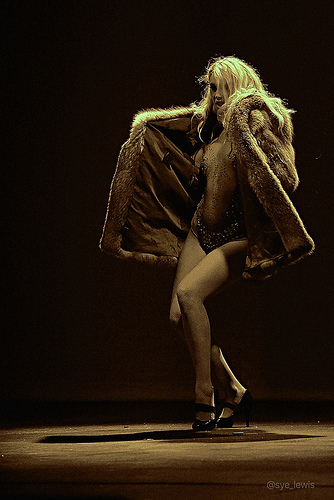 Our first performer of the evening was Betsy Rose who resplendent in head-dress provided a classy and stylish 1920's style burlesque performance and the accompanying jazz tones only served to rev the temperature up.

Next up was Kitty Bang Bang who with cigar in hand was smoking in every sense of the word as she whipped up the flames in her impressive and skilful fire routine to the bluesy drawl of 'Queen of Pain'. Pure class.

Our third act was introduced as a femme fatale but after a feathers routine was revealed to be Philin Gud, very much one for the ladies in the audience to enjoy as he got in amongst them with what I can only call his 'boyesque' routine.

There's only so much heat an audience can take so a musical interlude with Miss Frisky was in order and she belted out some great cabaret numbers.

Our fifth act before the interval was Miss Fallon Dee, celebrated Moulin Rouge showgirl and star of the West End Hurly Burly Show who provided a more modern twist on burlesque although it felt a little flat to me.

Hart opened the second half in much the same way as the first, getting down and dirty with the audience and coordinating, much to his credit, five men to catch him as he took a stage dive. An obligatory chorus of 'happy birthday' to one of the attending hen party ensued before we were on with proceedings.

Katherine Arnold appeared, blindfolded and led onto the stage by Philin Gud who helped her up onto the suspended rope where she proceeded to perform a most impressive gymnastic routine, perfectly choreographed to the accompanying music as, blindfolded throughout, she slowly and alluringly revealed all.

Betsy Rose returned next armed with a spear and wonderful outfit to perform a peacock feathers routine in vintage burlesque style that really had the audience going.

Miss Fallon Dee made her second appearance of the night, dressed in black, to deliver another more modern twist on burlesque which I have to say again felt a little flat and leaning more towards straight striptease than the delight of burlesque. She clearly had very vocal family members in the audience which she may have found off-putting: I certainly did and it was interesting to see that Hart was irritated too.

An interlude for the best-dressed competition allowed a few selected ladies from the audience to strut across the stage, some very clearly having dressed to impress on the evening and they did not look out of place. Miss Frisky re-appeared for her rendition of 'Kiss', and more audience interaction. 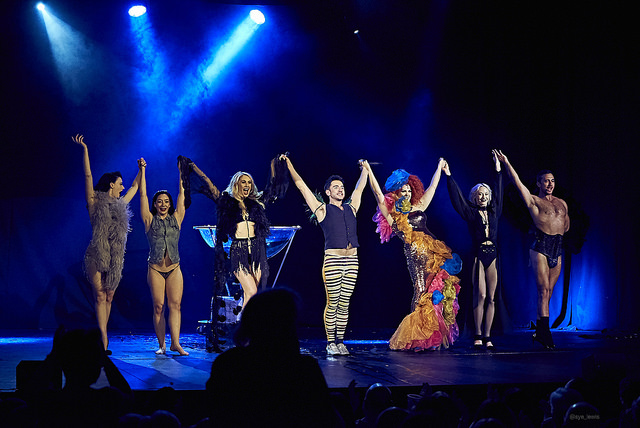 Our finale performance saw the return of Kitty Bang Bang who provided a fitting routine to close the show, ending in an over-sized glass with flames fanning around her in an absolute delight of a performance.

In closing, the whole cast of performers were re-introduced for deserved applause but it was Hart's accompanying 'haven't we done well' that perhaps summed up the challenge I had with tonight's show: I understand the need for Hart and Miss Frisky to work the audience up and clearly both are very talented in their own right and do add to the proceedings. Tonight though we had an eclectic audience and their pitch went with the 'hen' element which is fine - I am not sure there is a 'right' answer when an audience is so varied - but on occasions, particularly when there was excessive swearing, it seemed to stoop to a level that undermined the overall glitz and glamour of an evening of burlesque. Some audience members were clearly uncomfortable with this and chose not to return which is a shame because the varied burlesque routines both sides of the interval were superb.