When I was asked to go along to review The Ladykillers at Oldham Coliseum I didn't just say 'yes', but added, 'and if anyone else thinks they're going to come in my stead, I'll kill 'em!' For as long as I can remember Peter Sellers has been my all-time favourite screen actor, with Sir Alec Guinness a close second. This truly iconic and fabulous 1955 film starred the latter, and saw Sellers perform one of his first on-screen cameos that wasn't a Goon character. Yes, there was a terrible remake in the early 2000s - but we'll gloss over that as basically all remakes of the great films simply fall flat on their faces! This one probably fell flat though simply because it is a very British comedy, some might say quintessentially so; therefore moving the action to Mississippi and using Tom Hanks in the lead was doomed for failure straight away!

However, back to London! (Sorry, Oldham). A little old lady lives alone in a terraced house by the railway line in a London suburb, and has a rather fanciful imagination. She invites the local Bobby in for tea whilst she tells him of her suspicions and flights of fancy. She has a room to let, and it is this room that is the ideal location for the gang of 5 criminals to use. They intend to rob the security van at King's Cross Station, and so the gang leader, the so-called 'Professor' Marcus arrives and convinces her to let the room to him and allow his string quartet to practice there. He poses as the conductor and the other four gang members’ string players.

I loved the set (Foxton). It was a three-tiered affair with the living room and kitchen of the house and the street front on stage level, a small set of stairs led to the second level which had the bedroom and toilet. Behind that, the window out on to the ledge and the roof with the railway line and signals. It loved the decor, and the attention to detail within the set. It looked almost perfect. I was sitting central stalls. However, as the play progressed and the actors moved around the set, it became clear that certain things would not have been seen at different places in the auditorium. Anyone seated beyond the front row of the circle would miss all the action on the third level; anyone seated to the far left of the theatre would not see the music board which revolved to reveal the heist plan: etc. 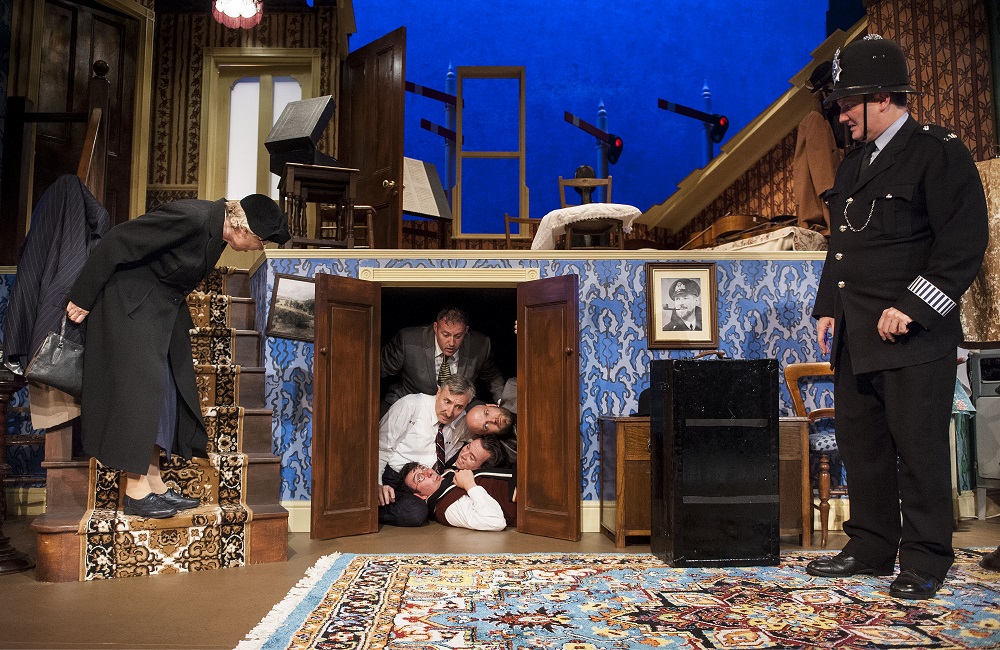 The stage adaptation of this film sensibly changes certain things in order to make all the action occur within the bounds of this set. The plot doesn't really suffer from these changes in my opinion; in fact it makes the whole thing tighter; a little more compact makes it more of a threatening nature when Mrs. Wilberforce realises her own culpability in the crime. The one thing that really irritated me though was the decision to have General Gordon (the parrot) covered and suffering from some disease. That seemed forced and the comedy derived from it, false.

Kevin Shaw directs this adaptation of one of Ealing Studios’ masterpieces with love and care. He understands the style of comedy and the need to be as truthful and faithful to that genre as possible; which he is. But I am still going to nit-pick! The constant treading on Marcus' scarf grew a little wearisome, and some of the physical fight sequences were less than good - especially the hitting across the face with the map / music board. That simply was so far from realistic it wasn't even funny. The knife throw to the temple and the blood however, was the exact opposite and was so realistic it was quite shocking. This was a little strange. I didn't quite understand at this point whether I was watching slapstick farce or stark realistic horror.

However, let's turn to the acting. All I can honestly say about this is, excellent! Not one weak link, and all wonderfully solid and hugely enjoyable performances. When faced with the daunting task of treading in the late greats' shoes, you simply cannot afford to try to simply do carbon copies of their performances - that simply would not be right - but to take certain elements of their performances, and create your own around them - as you all did - was simply wonderful. I saw moments of Guinness in Chris Mannon's superb and obsequiously delightful performance of Prof. Marcus; I saw elements of Sellers in Henry Devas' spiv, Harry; and Matthew Ganley proved once and for all that Herbot Lom is not the only actor who can play evil with such comedic skill, as he portrayed with ease and skill the Romanian killer who hates old ladies, Louis. I suppose Katie Johnson will always be for me the only Mrs. Wilberforce, but tonight she was alive in spirit, as Roberta Kerr's interpretation of the role was equally good.

Lighting and sound were both good, but just a personal whim, I would have liked to have seen the train travel down the line. ie; the smoke should have travelled along the line of the signals, not just have been static at the side of the stage to waft into the audience.

Yes, I am being picky, but to be honest, there was nothing other than personal preferences to consider. It was truly an extremely well cast, sensibly directed, faithful to the era and genre mini-masterpiece. I would certainly recommend that everyone, young and old, goes to see this. (Only make sure you sit central stalls!).