Up On The Roof - Guild Hall, Preston

Up On The Roof celebrates the wonderful music of Carole King and James Taylor. With songs such as: Up On The Roof, You Make Me Feel (Like A Natural Woman), Handyman and You’ve Got A Friend it's the perfect show for any fan of these incredible artists. Accompanied by a fantastic 6 piece band and showing a real enthusiasm for the songs made the night a one to remember!

Performed by Brian Dales and his band names 'Sweet Baby James' they have incredible experience in working with this music. He has been performing a solo act of James Taylor songs for a whopping 12 years so he knows the music incredibly well. Emma Pryde has been interested in Carole King since she was 10 years old, when the father taught her the song 'You've got a Friend'. She has now been performing Kings music of over 25 years and also has a wealth of experience in addition to Dales - as shown throughout the night. Both together made a perfect duo that had a fantastic sound when harmonizing. 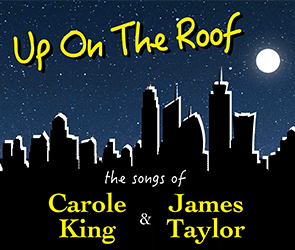 The duo covered a great mix of well-known hits and eclectic songs that made the evening very memorable and also a night filled with reminisce. Dales had a beautiful voice that filled the theatre wonderfully, at times it was almost a soul sound thanks to his riffs on the songs. He also was incredibly talented on not only playing for his own songs but would do the guitar parts and solos for all the King hits. Pryde had more of a gritty and stretched voice, much like King herself, which added an authenticity to the show. Her rendition of 'It's too Late' was great and was a highlight of the night. She also played piano for the night and fit appropriately with the other band members.

A quick note on the amazing band who were wonderful throughout the show and seemed to be loving the music. Special note for the drummer who was another highlight of the night, not only being incredibly skilled and enthusiastic but also smiled from start to end. Another mention to the backing singer who was also wonderfully dedicated and even played the flute when not singing. The idea of a show reel images projected onto the back well of the stage didn't work. The combination of the cheesy and googled photos with the songs brought no impact, if anything it distracted me from the songs- which is the last thing you want! The lighting also was too busy for such a small production in a medium theatre you don't need to use as many lights. The slower songs should be emphasised by limited and softer lights, it once again was distracting for the production. The music and artists speak for themselves, the audience doesn't require anything further.

Up On The Roof is a great production that hits the nail on the head with thanks to the incredible band and enthusiastic singers. The perfect show for any lovers of King's or Taylor's.