Every Friday since the beginning of May, multi-award-winning Liverpool-based theatre company, Naughty Corner Productions, have been far from naughty. In fact, in their Friday evening slot they have been producing an online Liverpool-theatre scene talk show entitled ‘Naughty Talk’.

Their aim was to keep the Liverpool theatre scene stimulated: connected and creative, inspired and entertained, during the May meltdown. They opened with an impressive array of female talent including Izzy Balchin, Faye Caddick, Margaret Connell, and Samantha Alton on the virtual sofa to discuss their experiences, with musical guest Reid Anderson closing the show.

The second week brought out the boys as Liverpool-born actors Mike Noble (The Curious Incident of the Night Time, West End and ROAD, The Royal Court London) and Daniel Taylor (Blood Brothers; The Tommy Cooper Show; and Lennon Through a Looking Glass) discussed their successes and being on the road. 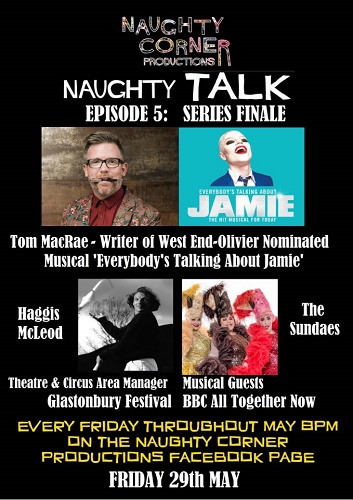 The third week saw the return of the ladies with Ellie Hurt and Natasha Patel from The B-Collective who successfully toured The Murder Ballads including stints at The Edinburgh Fringe, talking about their beginnings on the Liverpool scene which also involved another guest, the incomparable Chris Tomlinson from The Young Everyman and Playhouse who is also co-owner of Turntable Theatre. Musical came from the hugely successful Liverpool band The Cheap Thrills.

The fourth Friday has just brought us Ellis Howard, a Liverpool actor whose vlog went viral and now works for The Canary, and Liverpool-born Kelly Sweeney who stars in Hair the UK Tour, and SIX the Musical. Mike Poynton better known as TRACKY on the Liverpool gig circuit and Lily Almond with Jimmy Mclean provided the musical accompaniment.

The great thing about May is that it often squeezes a fifth week and so it is we get a Friday finale on 29th May at 8pm featuring Haggis McLeod, organiser of the theatre and circus fields at the world-famous Glastonbury Festival which Naughty Corner debuted at last year with their Rave R Us production. And as if that wasn’t enough there’s also Tom MacRae, BAFTA and Olivier-nominated writer of the West End smash Everybody’s Talking About Jamie which is soon to be made into a film. He will also be talking about his television work which includes Doctor Who, Casualty, and Comedy Central’s Threesome. Musical entertainment will be from The Sundaes who many will remember from BBC’s All Together Now.

So, remember to tune in to Naughty Corner’s Facebook page https://www.facebook.com/thencp/ on Friday 29th May from 8pm – and you never know, if this lockdown continues we may be able to convince them to behave for June too…!