Full casting is announced today for the new spectacular production of Zorro The Musical which will run at the Hope Mill Theatre in Manchester from 14th March – 18th April 2020, with opening night for press on 18th March, directed by Christian Durham. The show will be brought to life by a cast including Antony Costa as Garcia, Alex Gibson-Giorgio as Ramon, Emma Kingston as Luisa, Genevieve Nicole as Inez, Kit Orton as Don Alejandro and Benjamin Purkiss as the masked hero, Zorro. The cast is completed by Ajjaz Awad, Amy Bastani, Isobel Bates, Ben Boskovic, Maxwell Griffin, Matthew Heywood, Jessica Pardoe, Thomas Ping, Seren Sandham-Davies and Stylianos Thomadakis.

The audience will be enveloped by the action of the legendary adventure of the masked hero as they are taken on a thrilling journey into an iconic story of good vs. evil, love vs. hate, brother vs. brother. The action begins in the foyer with live entertainment and a Flamenco party led by the actor-musician company before the thrills continue to grow in the theatre itself. 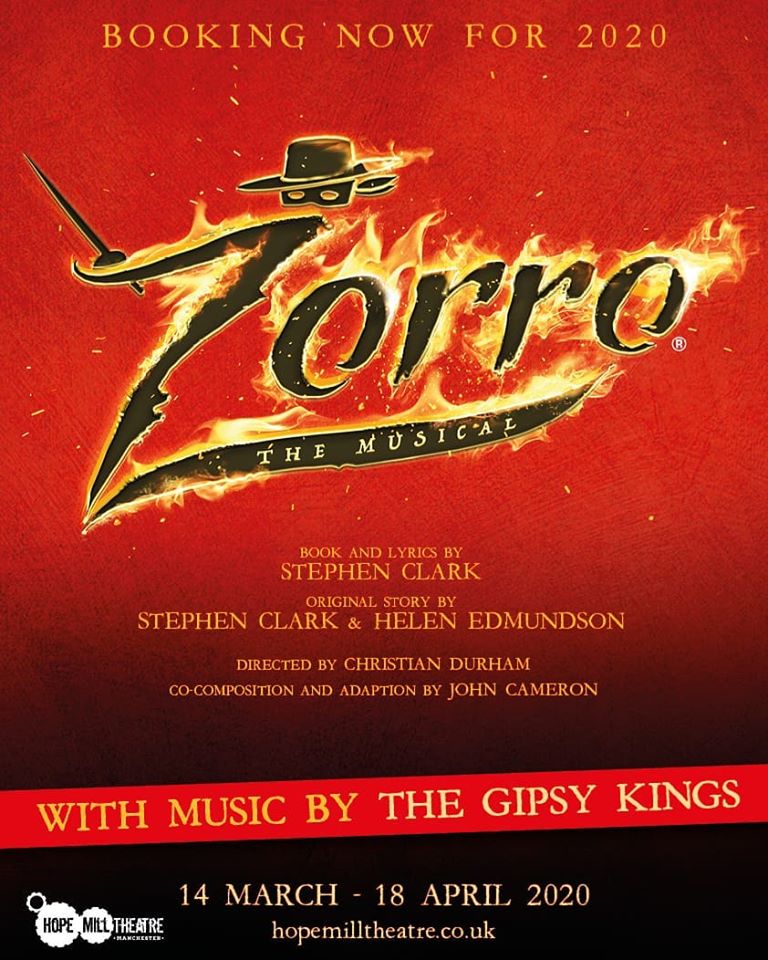 With music by the Gipsy Kings and John Cameron, lyrics by Stephen Clark and a book by Stephen Clark and Helen Edmundson, Zorro the Musical reinvigorates the story of the iconic hero, who appears when times are hardest and the struggle for freedom feels lost. The production is presented by Katy Lipson and John Gertz and features original music by the Gipsy Kings, alongside their international hits including Bamboleo, Baila Me and Djobi, Djoba. The production will be filled with pounding flamenco, breathtaking sword fights, tricks and magic, comedy and, at its heart, the desperate battle within a family of power versus freedom.

Antony Costa (Garcia) is best known as a member of the chart-topping boyband Blue. Most recently on stage he starred in the 2019 Rock of Ages UK tour. Previous stage credits also include A Judgement In Stone, Save The Last Dance For Me (Bill Kenwright Productions), Blood Brothers (Phoenix Theatre) and Boogie Nights (UK tour). For TV he has appeared in Holby City and Casualty.

Genevieve Nicole’s (Inez) musical credits include Guys & Dolls, Dirty Rotten Scoundrels and Spamalot in the West End, UK tours of Hairspray, Chicago, The Producers, Miracle on 34th Street and White Christmas, and previously at the Hope Mill in Pippin.

Benjamin Purkiss (Zorro/Diego) recently performed as the alternate Strat in the original West End cast of the Evening Standard Award and BBC Radio 2 Audience Award winning Bat Out Of Hell The Musical (Dominion Theatre/ Manchester Opera House). His other stage credits include Broken Wings (The Other Palace), Macheath in The Beggar’s Opera (William Christie and Les Arts Florissants) and Allegro (Southwark Playhouse).

Ajjaz Awad (Ensemble / Castanets) was the winner of a Fringe First Award 2019 for How Not To Drown (ThickSkin/Traverse Theatre). Further credits include Peter and the Wolf (National Theatre River Stage and Tour), Stories on a String (Polygon Arts) and The Hound of the Baskervilles (The Mill at Sonning). Her television credits include Holby City.

Ben Boskovic (Ensemble / Percussion) has previously appeared at the Hope Mill in The Exonerated with further stage credits including The Secret Garden (Barn Theatre), Holding the Man (Above the Stag), Paper Hearts: A High Street Musical (Edinburgh Fringe).

Maxwell Griffin (Ensemble) is a recent ArtsEd graduate. Zorro the Musical will mark his professional debut.

Matthew Heywood (Ensemble / Guitar) graduated from Manchester School of Theatre and most recently performed in Beryl and Seagulls (Bolton Octagon).

Thomas Ping (Ensemble / Violin) is a winner of the Laine Theatre Arts Triple Threat Award and the Mario Lanza Opera Prize. He appeared in Thursford Christmas Spectacular last year, and previously in Sweet Charity (Watermill Theatre) and Judy! (Through The Mill).

Seren Sandham-Davies’ (Ensemble / Trumpet) stage credits include Crazy for You (UK Tour), Aladdin, Beauty and the Beast (The Production Exchange) and Brassed Off (Derby Theatre). She has also appeared on television in The Great.

Stylianos Thomadakis (Ensemble / Guitar) is a recent graduate from Bird College. He has appeared on stage in Thorn of Acacia (Ensarkosi Productions). His film credits include Mary Queen of Scots and Artemis Fowl.

Tickets are now on sale at www.hopemilltheatre.co.uk/events/zorro/

Book and Lyrics by Stephen Clark

Performances: Tuesday to Saturday at 7:30pm, Wednesday and Saturday at 2:30pm, Sunday at 3pm