Legally Blonde to Embark on Major UK and Ireland Tour

EastEnders’ Rita Simons, Lucie Jones, who is representing the UK in the Eurovision Song Contest with ‘Never Give Up On You’ on Saturday May 13,and Bill Ward, star of Coronation Street and Emmerdale are to star in a major new UK tour of  the smash-hit Broadway and West End musical Legally Blonde The Musical.

Legally Blonde The Musical also has two dogs in the cast, a Chihuahua called Bruiser and another called Rufus, a big, brutish, dog that only its mother could love! Bruiser is already cast and will be on the road but producers have decided to hold auditions for ‘Rufus’ in every town and city on the tour - more details to follow.

Legally Blonde The Musical is an all singing, all dancing romantic comedy, a fun-filled, feel-good pink fest. College sweetheart and homecoming queen Elle Woods, doesn’t take no for an answer. When her boyfriend dumps her for someone more serious, Elle puts down the credit card, hits the books and heads for Harvard Law School. Along the way, Elle proves that being true to yourself never goes out of style. 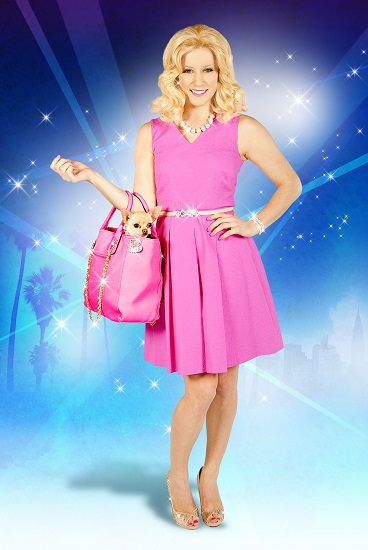 Bill Ward (Professor Callahan) is best known for his work on two of the country’s leading soaps. He has just finished 3 years in Emmerdale, playing farmer James Barton (Ross, Pete and Finn’s Dad) for over 300 episodes, who met a gruesome, death at the hands of his emotionally volatile partner, Emma, in one of the biggest storylines of the year. Previously, he played the builder Charlie Stubbs in Coronation Street, also for 300 episodes, who was murdered by his emotionally volatile partner, Tracy Barlow, in one of the soap’s biggest storylines of the year.  In addition to his many and varied TV and film credits Bill is no stranger to the stage and has worked on everything from Sophocles to The Spice Girls at Bristol Old Vic, Manchester Royal Exchange, Northern Stage, Clwyd Theatr Cymru, and The National Theatre Studio amongst others. He’s played Prospero in The Tempest in Guildford, Lancelot in Spamalot in the West End, and Kevin the Gnome in a muddy field in Glastonbury.

Directed and Choreographed by Anthony Williams,

UK Productions Ltd have been producing musicals, plays and pantomimes for over 22 years nationally, internationally and in the West End. In addition to Legally Blonde the Musical Martin Dodd is currently producing The Kite Runner in the West End and on tour, and for children national tours of CBBC’s Dick & Dom Live! and CBeebies Chris & Pui. Martin is also responsible for 11 pantomimes nationwide every Christmas season.