The life of Andrea Dunbar finally becomes a play

The extraordinary life of working class playwright Andrea Dunbar always seemed like it should be a play and is now being brought to the stage by Bradford based Freedom Studios in a world premiere of Black Teeth and a Brilliant Smile.

Dunbar died of a brain haemorrhage in 1990 at the absurdly young age of 29 as she sat in her favourite pub on the Buttershaw estate in Bradford where she had a tough upbringing in a close knit community. In many ways she was an almost forgotten literary giant cut down in her pride until Adelle Stripe decided to research Dunbar’s story for her doctorate, which eventually became the critically acclaimed novel that the play is based on.

Stripe’s exhaustive research for her Black Teeth and a Brilliant Smile retells Dunbar’s story mainly in the third person growing up with an alcoholic dad, a teenage pregnancy and abusive relationships, which inspired the three plays she completed, but also uncovered events in her life that has been hidden for years. The book was an obvious choice to be turned into a play, and there was no better choice to do than another working class dramatist Lisa Holdsworth, who has a TV drama CV as long as your arm, including Emmerdale and Ackley Bridge.

“I think the biggest pressure on me was what to leave out because it is an incredibly detailed book and a real testament to Adelle’s research,” says Lisa. “She goes so deep, no avenue unexplored, and she has found stuff out that been hidden for a long time.

“We’d be there for three weeks if I put everything onstage so it was looking at who were the most important people in her life, and we took a decision very, very early on that we wouldn’t put the men who abused Andrea up on stage. We wouldn’t give them a voice.” 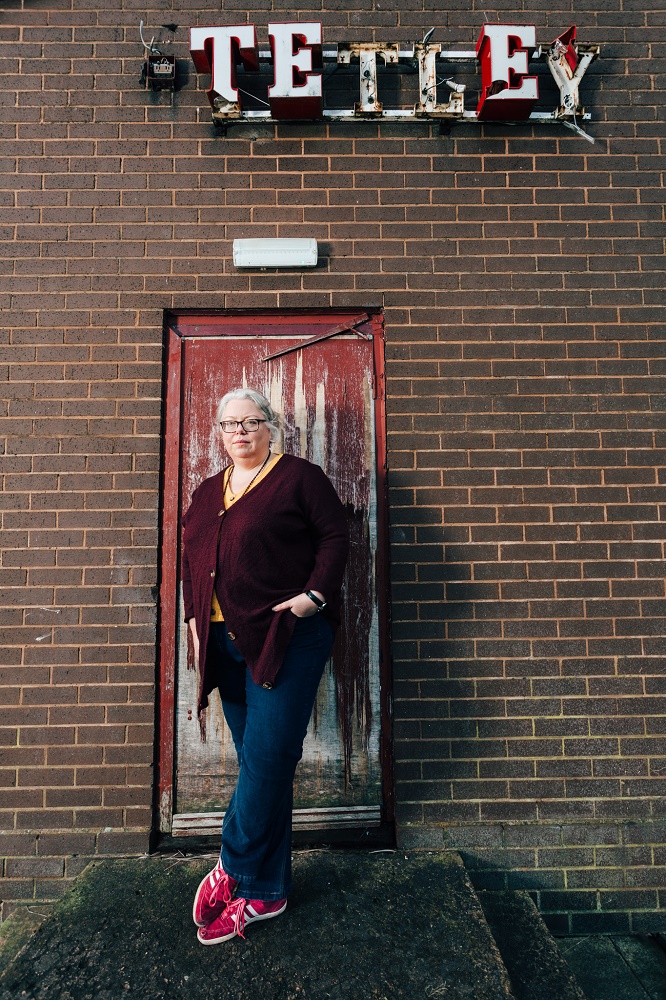 Stripe doesn’t pull her punches about the men that abused Dunbar, and who she refused to give into, so who does have a voice onstage?

“It’s very much about the women in Andrea’s life who persistently backed her and supported her. I don’t think Andrea was an easy person to be around on occasion, but her mum standing up for her when she got pregnant the first time, there’s a composite character of the friends that were in Andrea’s life and also the women who recognised she had a talent and pushed her on.

“Kay Mellor as well who supported her towards the end, and it is that ability of women to lift and support each other that is an important and positive part of the play.”

It would all too easy to just create a misery fest around Dunbar, but even amongst the chaos of her life her achievements in such a short time remain remarkable. Dunbar’s debut play The Arbor, written for her GCSE, took her from one of the toughest estates in the country to being the youngest playwright to have their work staged at the Royal Court, right at the centre of British intellectual life.

“There are two actors playing older and younger Andrea. Older Andrea is very much onstage for the whole thing, and it is set on the last day she was on the planet. It’s the day of her death like the book when she in the Beacon, and almost like a flashback through her life, not her life flashing before her eyes, but her changing attitude to her writing.

“It is so relevant to today and I’ve been helping Tracey Brabin MP with her select committee for parliament about working class access to the arts. Andrea is the perfect example of that if people aren’t elevated noticed, and given a voice then they fall by the wayside, and we lose enormous talent. That very much could have happened to Andrea.”

There is an irony that her mum Alma fought like a tiger to keep Dunbar in school when she became pregnant for the first time aged 15, but as soon as she left school it was off to the local mill not university. That disconnect between developing obvious talent and real life in working class communities is something Holdsworth is aware of from personal experience.

“It’s a problem for a lot of working class people who find that out when they try and do something outside of the norm,” muses Holdsworth. “She did go into the mill straight from leaving school because that was very much expected to pay her way. I think that is still the way people look at it, and certainly how my parents looked at my ambitions, that’s fine as long as you can pay your way.

“It’s almost a testament to Alma that she supported Andrea while not 100% understanding what it was that Andrea wanted to achieve. That’s quite selfless as had Andrea’s career gone the way it should have done then it might have taken her away from Alma and the family. There is a reality for people who have some success outside of their usual social circles it sometimes makes you an outsider. Andrea was desperate to avoid that, but it might have been unavoidable.”

One of the many ironies in Dunbar’s often chaotic life is that the cult 1980s movie Rita, Sue and Bob Too, based on her second play, is what many people remember her for, and yet she disliked it. Anyone who saw the recent touring revival of the play will have seen just how far away it is from the movie, especially the ‘happy’ ending.

“We are giving voice to that. How she was treated by Alan Clarke, the director, and it’s funny having worked in television for 20 years I very much recognise that particular swaggering masculinity, not listening to people kind of director. I’ve been lucky enough not to work with many people like that, but the way she was run roughshod over by Alan Clarke is horrifying, and unfortunately it is still a regular occurrence.

“So giving voice to that, letting her say how she really wanted that film to end. The fact that she was excluded from rehearsals, and even when they were filming outside her house she wasn’t allowed on set. She was silenced over and over again. This hopefully goes a little way towards redressing that balance and giving Andrea her voice back.”

The revival of Rita, Sue and Bob Too was not just a visceral reminder of her talent for dialogue, but that Bob is written not as a roguish Jack the Lad, but the calculating predator he is. Dunbar was percipient on the idea of sexual exploitation where teenage girls are groomed by older men, and Holdsworth thinks a film version would be very different today.

“For me what it shows that for certain issues you need a female writer and female director onboard. If that film was being made today you would hope that one of the enormously talented female film directors we have in this country now would have taken that on and understood where those two girls were coming from.

“She deliberately writes them as fifteen years old, and they cannot give consent to Bob. That’s the whole point of it, that they are not in control of the relationship, and he is a predator. It feels like it should remade for this current generation as she was saying stuff that we are giving voice to now.

“Andrea understood it only too well from personal experience. She had such a keen eye, was such a great observer and she was a magpie looking at other people’s live and reactions. She understood how these girls could be having a good time, enjoying it, but still being exploited .That doesn’t come across in the film, in fact I’m pretty sure it doesn’t.”

Working with the Royal Court which was not an easy transition for Dunbar who was uncomfortable in the self-assured, middle class London arts world, but she took them on, and was beginning to rebuild her career just before her unexpected death.

It’s still tough for working class creatives, and the recent comments by the Chief Inspector of Schools who said colleges are giving false hope to students when they offer courses with slim or unrealistic job prospects in the arts or media has left Holdsworth enraged.

“The reality is your upper class kids are getting those opportunities. I don’t want to turn on my television and only see the Benedict Cumberbatchs of this world. Eton College has three fully staffed and working theatres, now if there are no values in learning the arts why are those theatres there?

“Drama A Level barely exists now, stripping it away is actually telling working class kids do not dream big, or look around you, and think some of that is for me. Be happy with your lot in life.

“Don’t get me wrong as the world will always need electricians, roofers and people to look after you in hospitals and care workers. Those people are bloody heroes, but if you are telling kids that is the only option for you then there is something disgracefully worrying about that.”

Black Teeth and a Brilliant Smile opens at The Ambassador Pub from May 30th – 8th June 2019. To book got to www.freedomstudios.co.uk

Further dates to be confirmed at https://www.freedomstudios.co.uk/