Cabaret is a musical based on a book written by Christopher Isherwood, music by John Kander and lyrics by Fred Ebb. The 1966 Broadway production became a hit, inspiring numerous subsequent productions in London and New York, as well as the 1972 film by the same name. Tonight RNCM Engage take on this challenging musical, and they actually do a very good job.

It is based on John Van Druten's 1951 play I Am a Camera, which was adapted from the short novel Goodbye to Berlin (1939) by Christopher Isherwood. Set in 1931 Berlin as the Nazis are rising to power, it is based in nightlife at the seedy Kit Kat Klub, and revolves around the 19-year-old English cabaret performer Sally Bowles (Madeleine Healey) and her relationship with the young American writer Cliff Bradshaw (Lucca Chadwick-Patel). 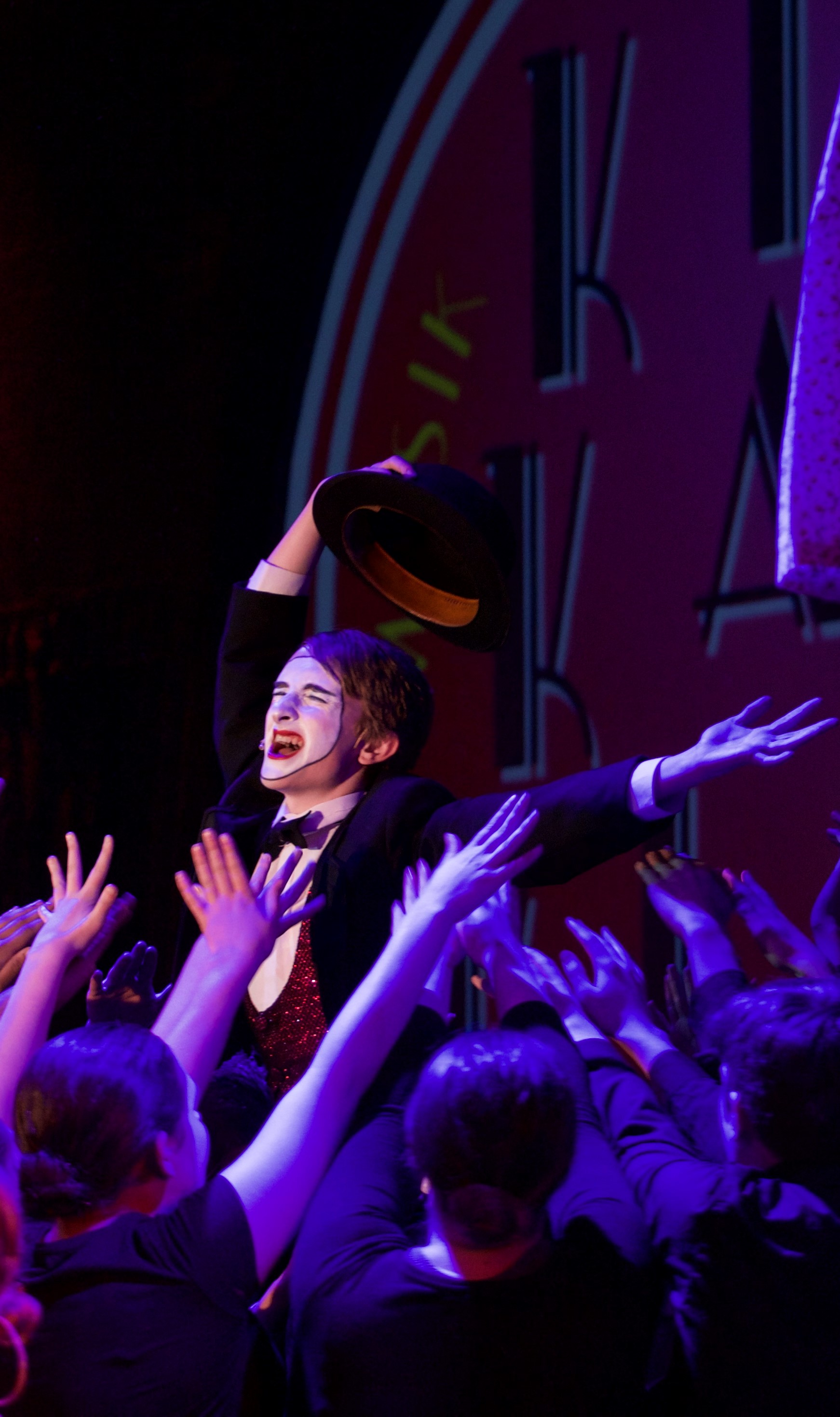 Overseeing the action is the Master of Ceremonies (Matthew Allen) at the Kit Kat Klub. The club serves as a metaphor for ominous political developments in late Weimar Germany.

Directed by Caroline Clegg the show opens with the Master of Ceremonies (Emcee) welcoming us to the Kit Kat club with one of the most famous songs from this show “Willkommen”. Allen has the mannerisms of Emcee down to a fine art as he moves around the auditorium greeting individual members of the audience. My only concern was that some of the songs proved a little too much for him later in the show, but in saying that it was a solid performance throughout.

The entire cast as the show began were made up with white faces outlined with black lines. This was a superb visual treat and whilst many kept this make up throughout some were forced to remove it to fulfil their roles in the performance away from the ensemble. The ensemble were used to great effect during the night assisting with scene changes in this compact performance space.

We watch the relationship between Healey and Chadwick as Sally and Cliff grow over the course of the night before falling apart. Chadwick was confident in his role as a young American writer coming to Berlin to work on his new novel. Healey, for me the star of the evening as Sally Bowles displayed a wonderful voice, powerful when required growing ever more confident in the role as the show went on.

The other relationship, seemingly doomed from the beginning due to cultural backgrounds was equally well played out by Perkins and Morgan as Schneider and Schultz. Constant interference by Ernst Ludwig (Sam Devine), A German man who befriends Cliff when he arrives in Berlin leads to tension and Lucy Mullin as Fräulein Kost provides some much needed humour as prostitute who rents in Fraulein Schneider's boarding house and has a constant stream of male visitors.

Backed by the previously mentioned ensemble there really wasn’t a weak link in this production. I should make special mention to the properties team under the leadership of Sally Malkin. Each and every item used on stage looked authentic and well researched.

A 13 piece orchestra under the direction of Daniel McDwyer sounded sublime throughout. I guess this is to be expected at the Royal College Of Music but requires mention non the less.

This production of Cabaret is good, my only gripe is that the venue was far too small for the size of cast. I had the pleasure of watching and reviewing ‘On The Town’ last year by the same group, however this was in the main theatre at RNCM. Being down in the studio this year seemed rather cramped. Good use of the balcony space was made for a couple of scenes. On the flip side to this the scenes in the Kit Kat club worked better in the intimate space.

Cabaret continues at the RNCM until Saturday and if you can find a ticket (they are selling well) then don’t miss the chance to see this talented group of young performers on stage. 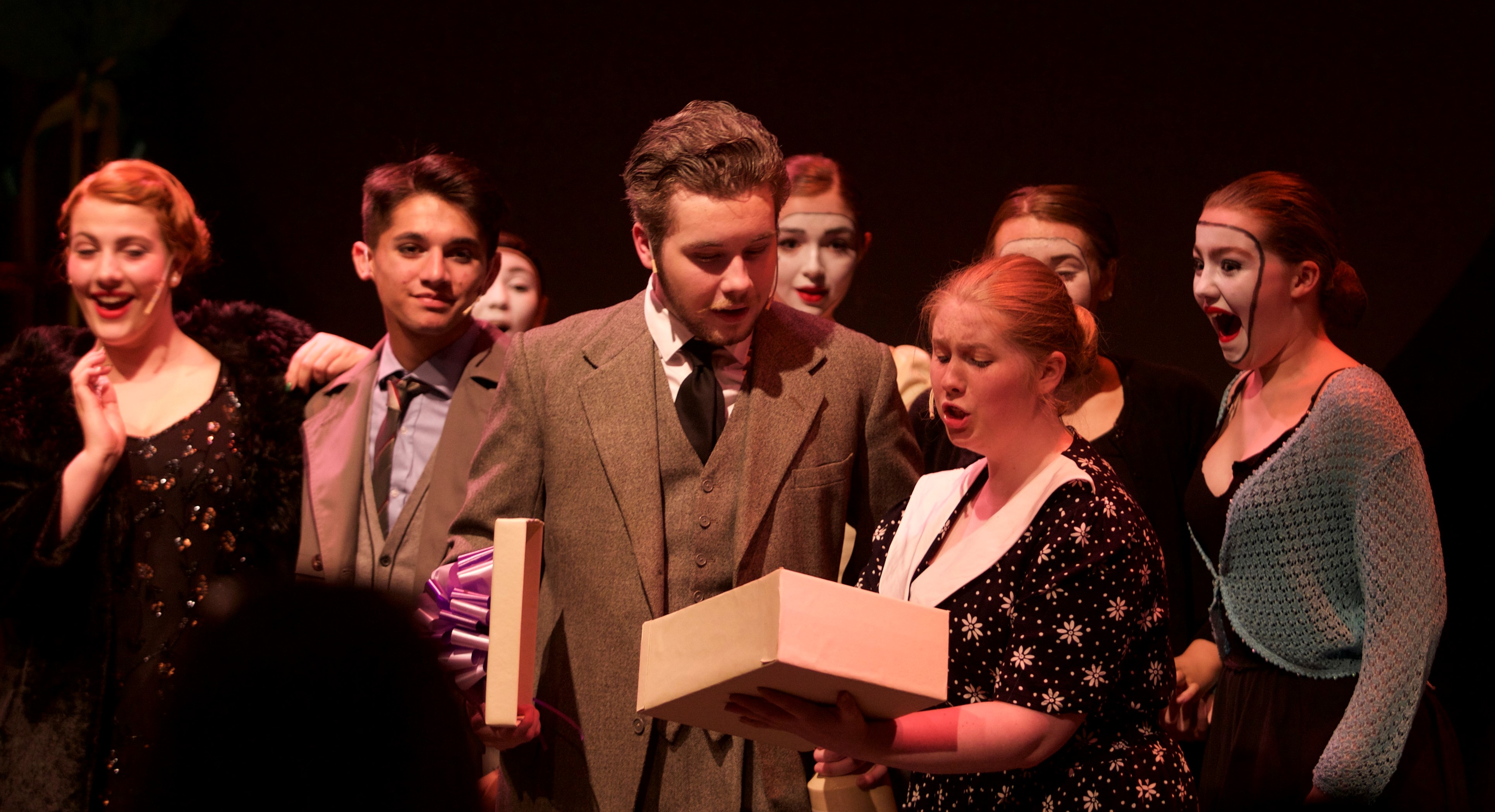