For one of my very rare ventures outside the Greater Manchester County, I went last night to watch Tempo Youth Theatre's production of Lloyd-Webber's Starlight Express. I made the journey because, not only do I happen to really like the show, but because I had heard so many good things about this youth group, and wanted to experience them for myself! And did they live up to expectations? No, they exceeded them!

For those of you who still don't know anything about Starlight Express, then in a nutshell, it is a story all about love and egos, about jealousy and comradeship, about cheating and about playing fair, about respecting your elders and about holding on to what you truly believe in.... just your average, everyday set of ingredients for most Musicals. The difference here however is that they are all train engines and carriages.

Walking into the auditorium to the open set, I was actually quite amazed by the simplicity and functionality, and yet just exactly how brilliantly it was designed. As close a replica to the original design as I think I have seen with one track coming from the stage and round two rows of seating, and the stage being on two levels with a central a two side ramps for another track in the races. To the rear, three arches representing railway sheds. Sadly no hydraulic turntable, but I think I can forgive them for not including that in the design!!

Whilst I am writing about the technical things, let me also say that the lighting design was first class. I have seen many productions of this show now, and many excellent LX plots, and yours ranks with the best. There were a couple of occasions where a softer approach would have worked a little better, and I thought the omission of smoke a mistake, but in general, really well done! 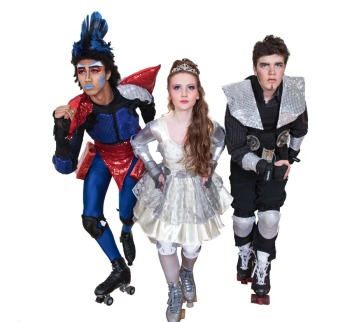 The sound was generally good, however the first two or three musical numbers were too loud and the balance on the mics wasn't quite right; but that seemed to have been rectified by the next number, and it didn't bother me thereafter.

Costumes, although by no means the best I have ever seen, were nevertheless, extremely good and well thought out. What I did really like were the racing helmets. To be honest I had forgotten those! I have seen so many productions over the last few years where companies have neglected to think about the racing helmet as being a specific and necessary addition to the costuming, and as such, I too, had forgotten about them.... so it was not only a lovely memory-jog for me, but fantastic to see that the helmets were so brilliantly designed too.

When it comes to the music, then my rant really starts - no, not with John Barry, the MD here, but with Lord Lloyd-Webber himself. Way, way back many centuries ago (oh no, wait; that's another Musical!) he wrote a wonderful score and it played to packed houses and great plaudits at The Apollo Victoria Theatre in London, and its name was Starlight Express. That was in 1984. The differences between that show and what is currently being produced are astounding, and what is more, the original was much better in every respect. As with so many Lloyd-Webber scores, he simply cannot leave them alone, and they change and mutate after every professional production. The storyline is altered, characters changed, added, removed; characters' motivations changed, and yes of course songs are taken away, added, music rearranged, and generally messed-up... until, now what is advertised and performed as Starlight Express should really be called something different; especially for those who, like me, remember with fondness the original and can attest to just how much better it was before the man himself decided, for reasons best known to himself, to change things!

Ok, rant over and back to John Barry! I have good news and bad news... which do you want first? Bad news. (Always best to get that out of the way first I feel). There were two songs which I felt were a little rushed and you didn't observe the true style of the pieces. These were U.N.C.O.U.P.L.E.D. And Poppa's Blues. I didn't really feel you had got the true Country and Western feel to the first and it could really have done to have been taken a little slower, and with the Blues, it was simply just too fast to be Blues, sorry. But now for the good news, and it is good news indeed; you are the first MD outside of the big professional productions to observe the recitativo sections which were slowed down to speaking pace to allow the singers to not only find their own decoration to the melody but to also TELL THE STORY! Many people forget that despite indications to the contrary, Starlight Express is actually an opera, and it has a storyline! So that's a huge plus for you I feel.

The choreography, by Jane Wood, was well thought out. Most of the routines were not particularly challenging, but just difficult enough for them to be exciting and interesting, making sure that all involved were capable of the moves given, and giving each dance and character appropriate steps. I would have liked a true 'picture' ending to Light At The End Of The Tunnel, and perhaps a little more could have been made of Greaseball's iron pumping. Where I think though Wood has difficulty as a choreographer, is allowing for moments when no choreography is necessary. Make Up My Heart was a prime example. I liked the idea of having Rusty and Electra on either side, but they should have been either totally still or in silhouette (preferably both) and Pearl didn't need any moves here. Also for U.N.C.O.U.P.L.E.D. STAY STILL! The movement here detracted and lessened the impact.

Vicki Clarkson, the director, obviously understood not only the show, but also the people she was working with. This is most important for any director. The best directors are those who get to know their cast and team before working with them. Plus points are awarded for not having the young child on stage at the beginning of the show, further plus points are awarded for Control being VO. 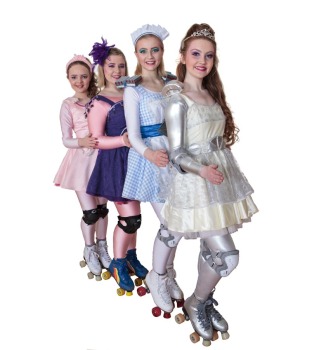 I also really liked the idea of flag-bearers for the national trains. However, between you and the MD I think I would have shortened the races, especially the first; and the 'set up' with CB's double-crossing double-dealing and the destroying of Rusty for the final race was just a little rushed and muddled. I think it needed 'playing' a little more. Otherwise though, a sterling job, and there were some lovely little cameo characterisations from the cast which came as a lovely surprise...........

...........and so to the acting! (Finally!!). To say that all of the cast were incredible is no lie. This is a youth production, and so, most are still teenagers. For this show, all the cast need to be excellent singers and actors with good movement skills; and all need to be able to do all of this whilst roller-skating. This is no mean achievement. Further, despite a couple of wobbles, and one or two looking distinctly uncomfortable occasionally, no-one fell and no-one bumped into anyone else! That surely is creditable in itself. The lovely cameos I spoke of first of all came in the form of the National trains; Sam Jones being particularly stern and unsmiling as Ruhrgold, and Emelia Mason being very aloof as Turnov. Perhaps there should have been something a little more 'Japanese' for Nintendo then too?? But my absolute favourite cameo role simply goes to Eliza Beresford for her most amiable, humorous and extremely well-measured performance of Flat-Top.

Poppa was on fine vocal form, and I liked the interpretation of the role. However, looking at the programme I see him credited as Assistant Director and he looked (and sounded) somewhat older than the youth stipulation. (?)

From the main cast, then a special mention should be made to Annabell Haarstrup as Pearl. A role that can sometimes become very mono-dimensional and go into the realms of caricature, was played here for absolute real and was a heartfelt and touching interpretation. Also Joe Griffiths-Brown for his rather ethereal and other-worldly arrogance as Electra.

I simply cannot write about all the cast, and already I am running out of superlatives. It was a stunning show and since it was my first time in Wilmslow and the first time I have seen anything by Tempo, I can only say this - when can I come back again and see you all??!! Once again, the youth have shown us that their commitment, dedication, energy and multi-talentedness outshines us oldies!! You are all the starlight!