As the Director of this production notes in his programme message, Oliver! is one of the world’s best-known musicals. There cannot be many people unfamiliar with Lionel Bart’s adaptation of the Charles Dickens novel Oliver Twist and its classic show tunes such as “Oom-Pah-Pah”, “Food Glorious Food” and “I’d Do Anything” to name a few; few will not have heard those immortal words ‘Please Sir, I want some more”. So with such well-established expectations from an audience, it could very well be daunting for a group considering staging this production. For the Lamproom Musical Theatre Company they rose to this challenge and exceeded expectations with a week of sell out shows!

When we first meet Oliver he is under the care of Mr Bumble and Widow Corney but it is not long before he is sold, on the run and taken in by a gang of pick pockets lead by Fagin. There he is taught how to become a pickpocket under the direction of the Artful Dodger. However, On Oliver’s first day as a thief he gets caught by the police but is eventually released into the custody of the well to do Mr. Brownlow (Martyn Lees), who by the end of the story will adopt Oliver as his son.

In true Dickens style the plot has many twists and turns and these were well handled with simple but effective staging and a good pace keeping momentum between songs. The company transported us effectively to Victorian London with consistent and believable accents, costumes and characterisations, which played faithfully to our expectations. There were many good performances in this group but perhaps most notable were Will Bisby and Belinda Lindley whose Bumble and Corney were a delight to watch – particularly in the perhaps lesser known I shall scream. Mick Cooper was a particularly likeable Fagin with a twinkle in his eye that endeared him to the audience, old and young alike, whilst we were given a strong, emotional and believable performance of Nancy by Holly Lees. 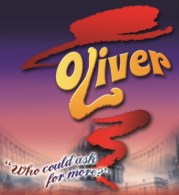 Of course Oliver himself was well played by Elliot Kenny, who delivered his songs with a lovely tone to his voice, yet appearing more confident when sharing the stage with others. Jacob Whitehead’s Dodger was as cheeky and likable as you would hope him to be and he did an excellent job throughout all his Musical numbers.

The director brought out the contrasts in mood and tension within this production effectively, with Bill Sykes’ entrance (played menacingly by Daniel Wilkinson) marking a much darker side to the production. You could definitely feel a change in the atmosphere within this intimate theatre, and it wasn’t long before some children were escorted out by parents as the tension got too much for them! For me I wonder if the deep gravelly tones were a little too much at times and feel it would have been nice to see a little more contrast within Sykes too.

The choreographed company numbers were often impressive when you consider the restrictions in space in this small venue with Oom-Pah-Pah being the stand out number by far when the ensemble really got into their stride, led well again by Holly Lees’s Nancy. The other company numbers needed a little more attack vocally to support the well-considered movement and characterisation throughout.

It is often easy to overlook some of the production elements that go into making a successful show so I feel it is important to note that the staging was well handled by Jonathan Canon who made use of his simple, flexible set efficiently throughout and the lighting design was simply superb, creating the perfect mood and atmosphere through colour and shadow throughout, which is often desperately lacking in amateur Musicals.

Overall this was a highly enjoyable production of a classic Musical, which this Company should feel very proud of. With a forthcoming season featuring some very modern musicals such as 9 to 5 and Sister Act, I will definitely be coming back to see if they can raise the bar further.