As a huge fan of Stephen Sondheim, I was really looking forward to this; one of his lesser known and rarely performed Musicals, which very cleverly mixes reality and fantasy through sketches, vignettes and musical numbers, as they tell the story of not just one but nearly all the actual and would-be assassins of US presidents through the ages and try to answer the million dollar question of why they did it.

I had never been to The Liberal Club in Eccles before, the venue for the evening's entertainment, nor had I ever seen this ambitious and difficult Musical tackled by an amateur company either; and even though we were slightly late in starting, and the company chose to perform the entire piece none-stop, without interval, amounting to 110 minutes, the time seemed irrelevant as it passed so quickly.

We were in the hands of an obviously very talented group of performers and creatives who had transformed a bland upstairs room of this building into a very intimate thrust stage. (Audience on three sides). The room being decorated with banners, bunting and lights, with the stage itself having been very sensibly and indeed cleverly designed - by using a small revolve on one side - to encompass the many and quick-changing scenes of this Musical, and the use of stage boxes and small hand props. The small band (playing live) were away to one side whilst the forth side of the rectangle which did not hold audience was benched so that the cast could sit there when not performing and become onlookers onto the scene too. This very Brechtian touch {well actually there were Brechtian touches evident everywhere!} suited this style of performance and enhanced the idea that there was some kind of line of dependency from killer to killer passing on their notoriety.

This was a strong ensemble cast who really relished their roles as America's most notorious and perhaps misguided murderers. It is really rather difficult to single out any one of the principals as this was such a tightly-knit and proficient production; but I'm going to do just that anyway! Ian Bennett as John Wilkes Booth was a very well-placed and real interpretation with a more than decent stab at a rather difficult accent. This very solid performance worked well when placing it against the more comical, but nonetheless great characterisations of the frantic little Italian Zangara with pent-up anger and purpose, and the extrovert disillusioned Charles Giteau. Peter Rigney took the role of Zangara, and looking so stereotypically Italian in a well-cut suit, with perfect hair and sharp erratic hand gestures, it was such a pity that when it came to him speaking Italian his pronunciation did let him down rather badly. The role of Charles Giteau was played with joy and panache by John Wood. In my mind this is the most difficult of the assassins to play because Sondheim and Weidman treat him to words and music which would not be out of place in a nursery, and his character can often be seen as a simpleton which he really and clearly is not. One mustn't forget also the very stolid and centred performance given by Richard Ross as Leon Czolgosz. It's very hard to tell but perhaps also Ross was the one with the best singing voice last night too. The Santa-Claus-suited Sam Byck, played by Jon Crebbin was also quite excellent. His self-taping monologues, which can oftentimes drag the production slower, were a joy.

The two ditzy women Lynette Fromme (Vicki Harrison) and Sara Jane Moore (Caroline Hickey) could certainly have sparked off each other more than they did. There was little chemistry between them last night and their scenes slow and sluggish. Given that it was the opening night, then hopefully they will develop some pace and real comedy timing between them for the rest of the run. 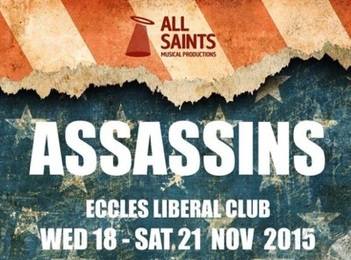 However, the least developed characters came in the shape of the two on-lookers and story-developers, Simon Murray as The Balladeer, and Dave Hurst as The Proprietor.

I think perhaps Murray looked a little young and inexperienced to tackle this role and his voice sadly let him down on several occasions, being unable to hit the higher notes of the score. Whilst Hurst's role was clearly not defined at all. The audience simply not knowing the reason for him being there. I don't think this is necessarily Hurst's fault. This could stem from a lack of direction, or even from the writing of the part in the first place. The programme note states that he is "the ethereal presence that is the state of mind // a goading voice to the assassins and // his power is in his omnipresence and indifference.", and if that is what he was meant to have been he sadly did not live up to it. Dressed in a long black leather coat, reminiscent of a storm trooper, and his face made up like a Hallowe'en scary clown; one was certainly unsure how to react to him and where his place was within this company of very real characters.

However, all that being said, the most off-putting thing last night was the lighting. Several scene changes were given a blackout which either came early or too late meaning the cast were talking or singing during it, and the LX settings in general were somewhat convoluted and perhaps unnecessary. The one effect I did like though was the use of small hand-held torches towards the end.

The actors needed also to be aware that even though every effort was made to encompass all the audience, sometimes, especially when your voices dropped or the music loud, those members of the audience you were not facing had difficulty in hearing.

This production was a much angrier and much more challenging and provoking one than previous incarnations I have seen. Gritty, no-holes barred direction and making good use of the tiny space, all the time making us, the audience, complicit in the action and not just observers of it; yes, we were meant to be judgemental too. Having an assassin pointing the barrel of a gun at my temple and challenging me with a maniacal stare as the lights dimmed at the end of the show last night was not what I expected, and it really challenged my emotional response not just to this production but to the use of guns and killing in general.

All in all, I really enjoyed the show last night, and, whether a Sondheim aficionado or Sondheim virgin, this is a dark yet comedic and human story which will not just entertain but make you think!