Blackpool and Fylde Light Opera Company (BFLOC) are one of a handful of amateur companies that have been given the chance to produce Legally Blonde in 2015. The show returns to the professional stage in 2016 on a UK tour beginning in Leicester thus delaying any further amateur productions till the end of 2016.

So how does this amateur (North West Premiere) version match up to the original production? The truth is very well, in fact it is on a par with the version I saw in the West End a few years ago. BFLOC have spared no expense with lavish sets filling The Grand’s stage and a highly talented cast, all of which appeared to be loving every second of the show just as much as the audience.

Perennially perky Elle Woods (Lisa Beardsall) is a girl who loves to be pampered and shop for the latest all-pink outfits. But don’t let this seemingly ditsy fashionista fool you, this sorority sister is smarter than she seems and doesn’t take “no” for an answer. So when her boyfriend dumps her for someone “more serious,” Elle sets out to win him back by putting down the credit card and hitting the books. Ready to revamp her image, Elle goes where no Delta Nu Sorority girl has gone before: Harvard Law School!

Beardsall suits the role of Elle perfectly as the determined blonde. The programme for the show notes that until earlier this year Beardsall had had no acting or singing lessons in her life! On tonight’s performance this must be because she is an absolute natural on the stage.

Mark Chapman plays Warner Huntington III with a grace that would befit any law student. His duet with Elle in the café as they break up was both funny yet moving. The other love interest in Elle’s life Emmett is played by Mykey Young with huge confidence. Young has one of the strongest singing voices in the company and uses it to good effect. The relationship that develops between him and Beardsall during the show is a joy to watch.

Peter Baldwin as Professor Callahan exudes charisma and authority as he attempts to find 4 interns to assist with a murder case where Brooke Wyndham (Amy Atkinson) is charged with murdering her older husband. Atkinson puts in one of the performances of the night with ‘Whipped into Shape’ which I think is one of the more difficult numbers to perform in musical theatre due to the intense choreography and skipping routines. Atkinson took on this challenge with ease and didn’t even seem out of breath at the end, which is an achievement in itself.

Sara Ordonez plays Paulette whom Elle makes friends with at the local salon assisting with a custody battle over her dog Bruiser (Floyd). The chemistry between Ordonez and Beardsall is superb from the first minute they meet.

In all amateur productions I see I watch out for a ‘star’ who may not get top billing but shines brighter than others. On this occasion it is Nikita Coulon who plays Serena. With her strong vocals and clinical dancing she really is a star to look out for in the future.

A 13 piece orchestra under the direction of Jim Thomas provide the well-known soundtrack to the show and work hard all evening.

With a cast of 43 (including two dogs) director Jacqui Mein resists the temptation to flood the stage with cast members at every opportunity, something that commonly happens with amateur productions and is something that is very refreshing to see. Choreography from Amie Rutherford is very disciplined and a joy to watch.

There are two cast members on stage that don’t have any lines or dace moves yet are probably the most loved characters in the piece. These two are of course the dogs. Elle’s canine companion Bruiser (Rico) and Paulette’s Rufus (Floyd) behave perfectly throughout and seem to be old hands at this acting lark!

Legally Blonde pays at the Grand until Saturday and is certainly well worth catching if you can. A large scale production from a company that is only amateur in name as the show is of a high professional quality. 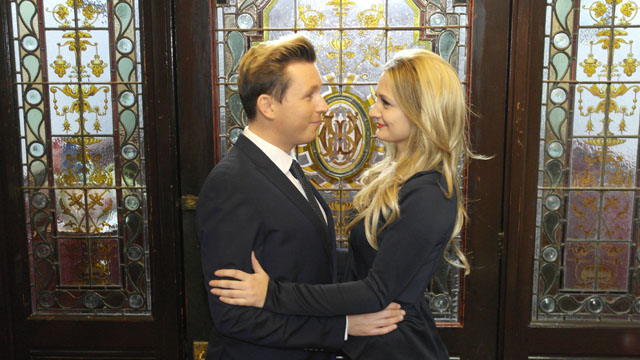