The story of Pillowman is a dark and gruesome play by Martin McDonagh. A collection of small stories interwoven through an overarching story about the writer who has written the stories. In the original script the lead roles are two brothers Katurian a writer and the learning disabled Michael. The twist of this show was that the two lead roles were sisters Katurian and Michaela, whilst I felt that the dynamics of sisters would be different to that of brothers and also the undercurrent of male police officers and male prisoners versus that of male police officers and female prisoners. However, The Almost Famous Theatre Company’s twist on a twisted tale worked well.

This play was a very long play comprising of three acts, the first and third of these were approx. three quarters of an hour long, the middle act being one-hour long.

The first act was set in a police station with Sebastian Singh as Detective Tupolski, Reece Hallam as Ariel and CJ Zaphi as Katurian, as the unlikely protagonist. I felt somewhat disappointed with this act as it felt ‘lightweight’. The balance of dark and light between the sinister stories and the comedic interludes missed the mark, as did the ability to share important information as a throw away remark. CJ Zaphi had a couple of ‘clumsy’ moments tripping over words and scenery, however she managed this well, with her strengths lay in her narrating / story telling. 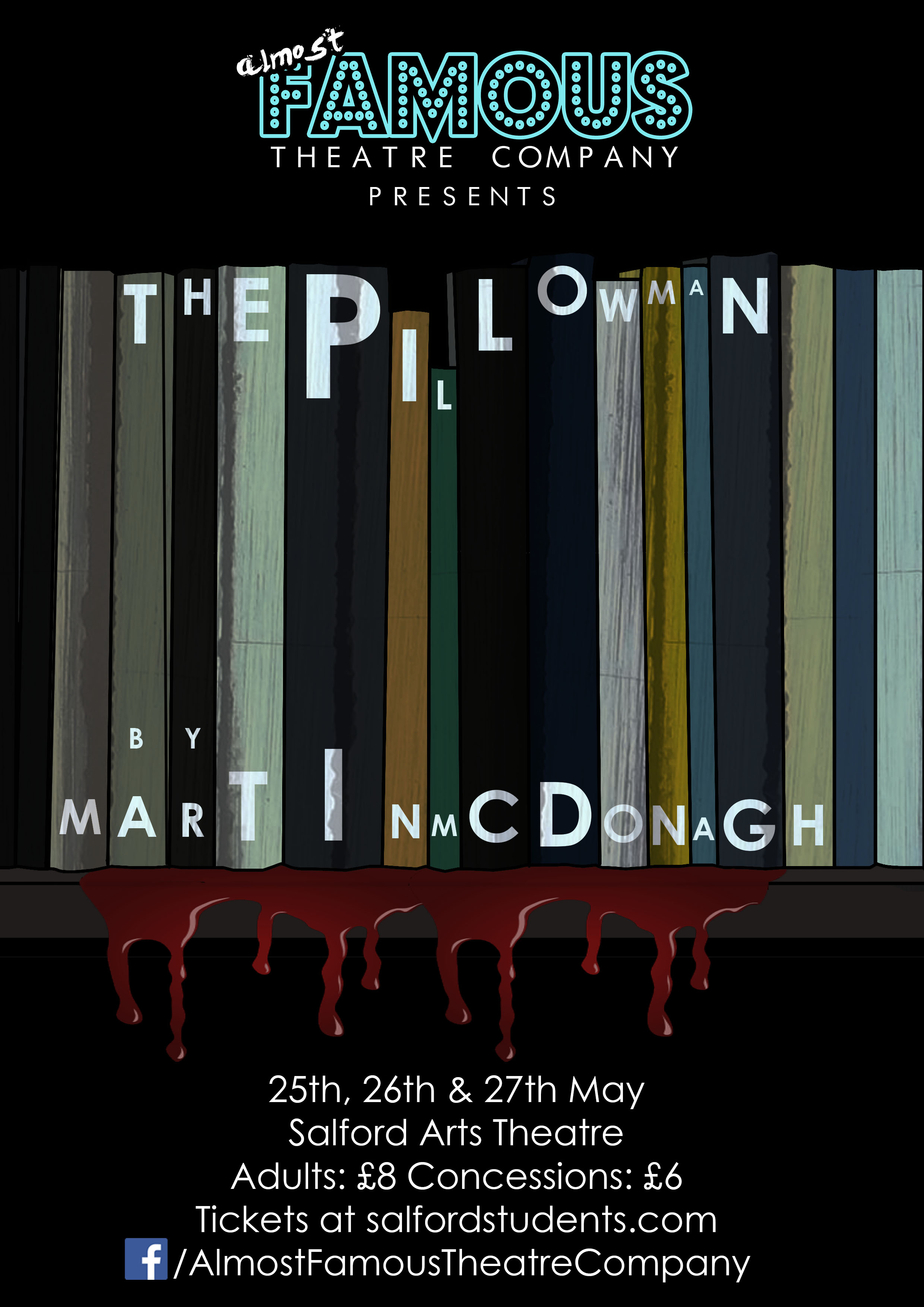 The second act was set mostly within a police cell with Michaela and Katurian. This was the highlight of the show with Bethany Gregson as Michaela was sublime, gentle and endearing. CJ Zaphi playing the tortured (in every sense of the word) Katurian was convincing. This juxtaposition between the two sisters working well.

Largely the montages of stories worked to dramatic effect, with the ‘real’ Katurian and the ‘story’ Katurian being represented by actors wearing the same clothes and Rachel Stirrup’s brief but sinister and darkly comedic portrayal of the mother, alongside a small ensemble of actors.

Act three saw a ‘dip’, as some of the words were poorly articulated well, being babbled, so it took a little while to realise that they were reprising the story of The Little Green Pig. CJ Zaphi’s performance slipped as her portrayal of Katurian did not ring true, her movements, thought processes and words too fast for someone who had been so horrifically tortured.

Throughout the play all the actors were good in their own right, which was emphasised by each of the monologues. Yet the scenes where there were three characters on stage didn’t quite gel and despite minimalist scenery, the scene changes were quite ‘clunky’.

However, regardless of these observations the play had the right ingredients and with a few ‘tweaks’ here and there it had real potential.

The Pillowman continues until Saturday 27th May at Salford Arts Theatre http://www.salfordartstheatre.com/whats-on