Once again I find myself going to see a Musical somewhat uncertain that it will be my cup of tea. I have only previously ever seen snippets of the full version of this Musical before, and I have been less than impressed. A world in which puppets and humans interact; where some puppets are human and some are monsters, and yet all live happily together in a very Sesame Street sort of way?! It all sounded too infantile, ridiculous, and dare I say too American for my tastes.

However, once again I find that once I actually am part of the audience in the theatre, this premise actually doesn't bother me at all and I find myself becoming quite involved and emoting with the puppets. This can surely only be put down to the fact that it was excellently directed (Timothy Platt) and extremely well interpreted and acted by the cast.

This is a youth production with the eldest performers being only 19 years old, and so the School Edition of the Musical was presented. Basically, the same story without a couple of the more contentious songs and much more 'child friendly'. This however works very much in its favour for me, as the storylines (plot and subplots) and characters are much more clearly defined and perhaps also easier to relate to. 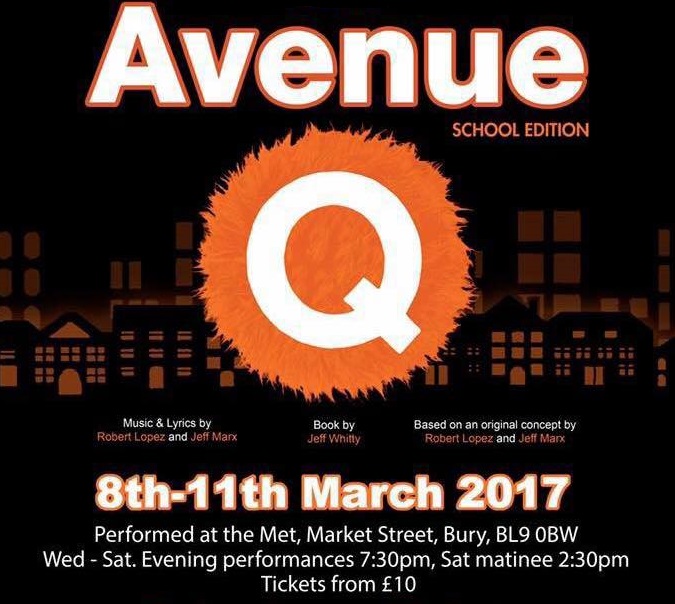 The other thing which is noteworthy is that many of the cast were not actually 'there'. Dressed in black (in deference to that noble Japanese tradition in Kabuki Theatre which means you are 'invisible') they were the movement and voice of the puppet stars. Some were 'open hand' puppets (requiring two puppeteers) and some stick puppets (worn on one hand like a glove whilst the other hand operates a stick to move them), and even more amazing is that the puppeteers can sometimes change and it is not necessarily the voice of the puppeteer which speaks for the puppet. It could all be a little confusing, but somehow it wasn't and worked wonderfully. The puppet-masters having learnt a new and very useful skill.

Heading a strong a well chosen cast was Sam Bate, who was given the daunting task of manipulating and voicing not only the lead character of Princeton, but also one of the subplots' main characters too; that of closet homosexual Rod. If the premise is that those holding the puppets are 'invisible' it was impossible, since watching Bate's very expressive body language and facial expressions added so much to our understanding of the characters he held. This applied to all the others too, to some degree.

Princeton's love interest came in the form of Kate Monster (handled by Dalia Kay and Isobel Cunliffe) and was an extremely lovely performance indeed. With the voice pitched just right, I was able to sympathise and empathise with her emotions, and whichever of the two sang the act one closer, 'Fine Fine Line', sang it just beautifully.

George Platt deserves a special mention as he manipulated and voiced two of the more major characters with instant and incredible vocal dexterity, going from a throaty gruff rasp for Trekkie Monster to, I assume, his real voice for Nicky.

I could continue and praise all the cast in a similar vein, but I am running out of word-count!  Even the small ensemble chorus were essential and alive. Bringing cardboard boxes to life for one of the first act songs was both inspired and worked brilliantly.

The energy levels were high and the pace good, although this did dip noticeably in the second act; and the set was excellent, the LX plot worked really well and I especially applaud the scene changes, which were swift, quiet and clear.

In conclusion; this is a wonderful 'feel good' show with some very humorous lines and is a very heart-warming story. It is performed here by some very talented young people, so grab a ticket quickly before they all go!