The fact that “it is inspiring to have so many talented young people in the region” may seem a cliche but when you have the pleasure to know lots of them and get the chance to see a collection of them, from different groups, in the same show, it makes for a real honour and night of true pride.

With performers from all across Greater Manchester, MAODS and Next Generation’s (previously two separate entities) latest offering of the classic favourite Grease - often portrayed tackily and cheesily - is a high-energy, fun and entertaining show featuring and showcasing the versatile and evident raw talents of some pretty impressive young performers and their three-sided auditorium seating at George Lawton Hall proves that they anticipated the selling out of the show and they weren’t wrong. I was just glad I got a seat to enjoy the show.

With rave reviews of their last production - The Railway Children - the bar was set rather high but their usual award-winning high standards rose to the challenge with what can only be described as teamwork. A passionate group of people who tirelessly dedicate their time to the craft and art of performing and helping to produce quality theatre. From Molly France’s incredible choreography debut - to be much commended - to the props, lighting, sound and front of house team and committee.

Leading the cast of 32 is Haroun Jedall - who recently played the lead in an adaptation of Shakespeare's Romeo and Juliet - as iconic Danny Zuko, leader of The T-Birds, alongside the two joint leading ladies: Georgia Taylor as Sandy and the amazing Katherine Farrow as Rizzo. Both ladies play parts brilliantly and I adore their vocals greatly, with a nice Mamma Mia-esque Australian-British accent from Georgia - ‘Hopelessly Devoted To You’ and ‘There Are Worse Things I Can Do’ are both showstoppers for me, as is ‘Freddy My Love’ performed beautifully by Tom Kehoe as Marty. The gender reverse was ingeius and worked very well, equally reflective with the T-Birds with Doody played by Keavy Smith; portrayed almost like Anybodys from West Side Story. Tom’s Marty is the Gay Best Friend style as part of the Pink Ladies but didn’t play to the stereotype.

The risk in this show is the intention of modernisation to modern day with the characters having an interest/fascination with the 50s/60s style. This wasn’t clear and became muddled when, for me, that factor was ruined by the use of a MacBook. I only got the reason for this when it was explained to me but, along with the subtle hints in the auditorium’s decoration, the use of mobile phones was also lost on me. The set of four blocks of steps and a sofa and dressing table works well but am not a fan of the graffiti ‘stamped’ wallpaper as it was more 80s, abstract and made some of the lighting changes look odd. Whilst we are on lighting, I didn’t like the white Cannons and the red and blue lighting could work better for the scene change when the boys scarper rather than during the song but that is very minor as the lighting is nice throughout, as is the sound, with the live band being led by MD Paul Firth.

The opening of the show with Dominic Dunne as Vince Fontaine singing ‘Grease Is The Word’ is very much welcome with his gorgeous voice, as he wandered across the stage as groups and characters established themselves in the introduction, and I guess his more casual and modern attire should have given me a clue as to the time in which it was perceived to have been set (we, from the back row, couldn’t see his head at the start when he is on the balcony). The harmonies of the cast, particularly the ‘backing trio’ is lovely and it is nice to have the trio in the show as their voices add to numbers and I enjoyed their equal involvement in Teen Angel, especially Mason Thomas’ (the other Teen Angels/members of the trio are Katie McCoy and Lucinda Mann). The dancing is in sync and well-executed and simple yet effective - ‘Born to Handjive’ is a delight to watch and another highlight, along with the blocking of the drive in movie where they watch what I think may be a scene from Grease 2?!

As well as the ‘leads’, other stand-out performances include Claire Edgerton’s highly entertaining portrayal of headteacher Miss Lynch, Lewis Kilgour’s geeky yet charismatic Eugene, Elizabeth Parkin’s Patty Simcox, Lucca Chadwick-Patel’s Sonny, Ellie McLaughlin as Jan and James Scanlan as Kenickie where he was clearly in his element during ‘Greased Lightning’. I felt Erin Marshall’s Cha Cha was a bit flat in delivering her dialogue but she made up for it with her dancing and I just kept wanting to see more of Frank William’s Roger “Rump”, after his fabulous duet with Jan. Isobel Parkin played Frenchie well too. They were obviously well-directed by the talented Hannah Davenport, an accomplished actress herself, who I am glad to say ensured consistency with the film on which many base their judgement and the relationship between characters.

There were as few obvious pauses but ‘You’re The One That I Want’ was well worth the wait. The end of the show didn’t feature a flying car (Chitty is tomorrow) but it was almost like watching ‘a dream’, with many 5* elements.

There was a part in my mind when I thought about the future when I hope to be reviewing a show featuring some of the same young people in this, only they will be professional and will have progressed in their careers, if they so wish to.

Impressively but unsurprisingly Grease is SOLD OUT but runs until 10th December. For information on future productions from Mossley which include Parade, Brassed Off, In the Heights and Gypsy visit http://www.maods.org/ 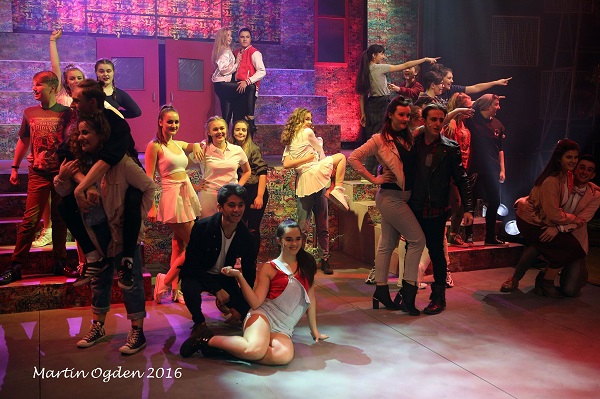