Behind The Scenes At The Museum - HOME, Manchester

Manchester School Of Theatre have done it again; found an obscure or rarely performed play, and made it their own. This time, their choice of play has probably one of the most uninspiring and at the same time misleading titles ever; but don't let that put you off! Behind The Scenes At The Museum is a novel by Kate Atkinson, and has been adapted as a stage play by the talented Bryony Lavery.

The play, as indeed the book too, tells the story of several generations of one family from York, who suffer tragedy in Shakespearean proportion. The play is set, ostensibly, in a psychiatric hospital, (or York City Museum depending on your interpretation), and the psychiatrist is prompting her patient Ruby to relate her story. Ruby is the protagonist here, and in a series of disconnected flashbacks, rather like the audience being given a set of jigsaw pieces and only by the end of the play can we place the final piece in the puzzle, we learn about Ruby and her life and her family's life. 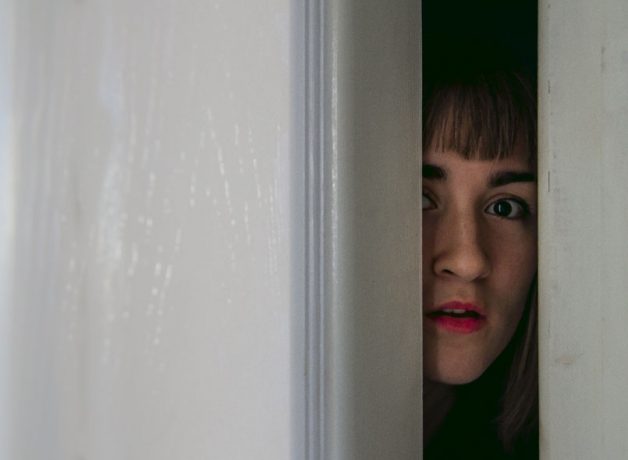 It is a rare feat indeed, when a play has so much tragedy, that the play can also be full of light and well-placed humour too. For this we thank both Lavery and Stefan Escreet, whose direction of this piece was visually interesting, excellently measured, and brought out just the right balance between comedy and tragedy, always keeping the pace flowing and never allowing it to descend into the Slough of Despond.

The play's themes of child death, family 'disappearances', unrequited love and unhappy marriages were constant throughout, with of course, that final all-important nugget being left until last.

I loved the split level set, simple and effective. the dark grey colour and minimalism suiting the style of this production excellently. (Olivia De Monceau). The marionettes of war dog and Pearl, along with the inspired idea for the family's pet dog, added to the tragi-comedy feel of the piece, and worked excellently. As always with Manchester School Of Theatre productions, the plays are fully produced with great thought about many other aspects of bringing a performance to an audience besides the acting, and here the costumes were outstanding as was the sound. There were many quiet background effects throughout this piece which happened almost subliminally, and I wonder how many audience members were actually conscious of them...however, they added greatly and were superbly chosen. The lighting was also excellent, although I would have preferred more red, and perhaps a greater effect altogether when the house burns down and Ruby is left alone in her bedroom. Perhaps the only moment in the play when I would have liked it to have been more realistic and dramatic.

The acting too was exemplary. Amy Beckett played the disturbed Ruby with an experience and presence beyond her years. It was a tour-de-force performance and was remarkably well measured. No less credit should be given to her family, a group of consummate performers who brought her relatives to stark life, playing multi-roles between them, with consistent characterisations and deftly changing between them, bringing out the humanity of these people, never allowing them to be mono-dimensional. They were Rachel Gill-Davis, Dylan Campbell, Lara De Vos, Tayla Kenyon, Fiona Munro, James Farley, Dafydd Shalders and Christopher Arkeston. Between them bringing to life the generations of Ruby's family and extended family. Special mention should be given to Fiona's Munro's interpretation of the elderly grandma with dementia. This could so easily have been a caricature or a figure of fun, but instead it was simple, real, and complete, and highly accurate.

The weak link in this play, and very sadly there was a weak link, was that of the doctor (psychiatrist) played by Cynthia Udom. I am uncertain whether it was directorial or natural that Udom chose to speak both very quietly and with an accent. Maybe this was because she was outside of the narrative, urging the narrative on; an intermediator between action and audience. It was the least 'real' of all the characters on stage when perhaps it should have been the most. The unsmiling, cold glare didn't help.

That aside though, this was a wonderful piece of theatre, and proving once again that the training these students receive at The Manchester School of Theatre is second to none in the city. I reviewed this play as I would professional ones, making no allowances for the fact that these performers are still in training. This is the level of regard in which I hold your establishment.