Tonight the MCMTC present Roger and Hammerstein's South Pacific at the Grange Theatre, Hartford under the direction of Gary Jones.

With a backdrop of the ocean the scene is set on a tropical beach and the opening scenes feature several sailors and islander 'Bloody Mary', wonderfully portrayed by Annabel Fox, who is being 'taught' some American phrases by the sailors, sailors being sailors they are not always appropriate! Bloody Mary from the nearby island of Bali Ha'i trades with the troops and is very popular amongst them and that brings us to the first song 'There is Nothing Like A Dame' which is performed with gusto and great enthusiasm by the crew. The arrival of handsome Lieutenant Joseph Cable (Jacob Hallet) brings hope to Mary of a husband for one of her beautiful daughters Liat (Laura Merriman). There follows a beautiful rendition of Bali Ha'i by Fox and Ivor Farley, performing as Luther Billis who also adds some comedy to the show. Fox keeps to her island accent throughout even during singing, which sadly, some of the other cast members seem to lose occasionally. 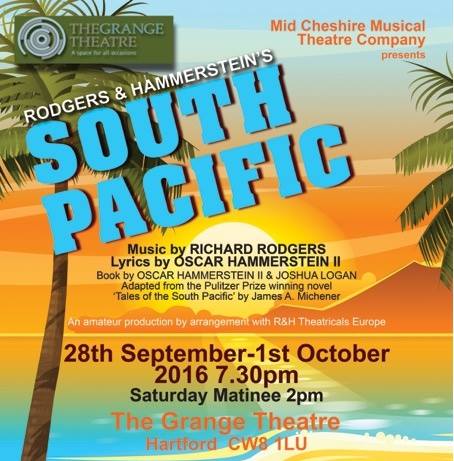 Nellie (Siobhan Webb) is a young nurse and falls in love with Emile De Becque, (Mark Murphy) a much older planter and unknown to her a father of two children of mixed race. Murphy is perfectly cast as Emile and it is no surprise to learn he has performed this role before as he acts in a very relaxed manner. He gives a strong performance of 'Some Enchanted Evening' but does lose the French accent. The musical is set in a time when prejudices were rife and Nellie upon being introduced to his children (Ella Stephens and Emily Murison, who both show great confidence when they appear on stage) feels she cannot accept them and rejects his marriage proposal.  Along with an ensemble of islanders and nurses Webb gives an energetic and vocally good rendition of 'I'm Gonna Wash That Man Right Out Of My Hair'. Emile overhears and wins her back over and together they give a reprise of 'Some Enchanted Evening' which follows with a lovely performance of 'I'm in Love With a Wonderful Guy' by Webb although the accent slips. Lt Cable (Hallet) is also in fine voice as he sings 'Younger Than Springtime'. He finds himself falling in love with Liat, Mary's daughter but the fears of his families disapproval over a mixed marriage are strong in his mind and he feels unable to commit.

There are occasions during the evening when the choreography is choppy, possibly due to sheer numbers on the stage but that can be forgiven for the sheer enthusiasm that is given. I wasn't sure of the subdued blue lighting when three dancers were on stage as it made it difficult to see them. Set changes were a little slow and sometimes distracting. The musical is supported by a wonderful band but due to the theatre arrangement were not ideally situated in front of the stage and the double bass player obstructed some of my view of the stage, those closer may have had more of a problem with this. Sometimes the music was a little loud when played during spoken moments and I don't feel it is necessary to have this 'background music'.

During the interval we are given a 'programme' of the upcoming thanksgiving celebrations and are invited to join in with the singing in the second half. I'm not totally convinced this works as now the actors were talking to the audience and it appears more panto than musical with some of the cast walking around in the audience encouraging singing.

Ask anyone what songs they know from South Pacific and 'Happy Talk' is bound to be mentioned and tonight we are treated to it with Mary (Fox) who again gives a great performance.

The overall show was bright, colourful and entertaining and as expected, all the iconic songs associated to South Pacific were performed. There are indeed some very good vocalists within the group. There are some things that need polishing up and as is the case in many amateur productions the seemingly need for all members of the group to appear can sometimes overwhelm. The main characters were all suitably cast and gave credible performances throughout.

So does it all end happy ever after? Get yourself along to The Grange Theatre, Hartford where South Pacific will continue to run until Saturday 1st October 2016 and see for yourself! For more information and tickets: https://www.ticketsource.co.uk/thegrangetheatre