Pick Me Up’s 2016 Summer Sondheim season opens with Assassins. Assassins is written by John Weidman based on a script by Charles Gilbert, a playwright, which was read at Stuart Ostrow’s Musical Theatre Lab where he served as a panellist several years previously. The musical premiered Off-Broadway in 1990 and opened in London in 1992.

The small intimate theatre is fully transformed and especially themed for the show - with the draping of star and stripes and wooden structures and the seating layout includes ‘presidential’ boxes.

Assassins opens with a crowd gathering at a carnival gallery with the proprietor of the shooting gallery enticing customers to “C’mere and kill a President!” From that point forward; stories of nine individuals whose aim is to assassinate the President of the United States are narrated in text and song by The Balladeer (played by Sam Hird) who double ups as actor/musician.

Sondheim cleverly composes and writes ballads, under the musical direction of Barbara Chan, for some of the assassins with the infamous John Wilkes Booth (played by Simon Radford) killing President Lincoln to Samuel Byck (played by Craig Kirby) who attempts to assassinate President Nixon by hijacking and crashing a plane into the White House. The musical comes to a climate when a desperate Lee Harvey Oswald (played by Hird) is met by the assassins at the Texas School Book Depository in 1963. In order for them to be united in history, legitimacy, and justification this soon leads onto President Kennedy’s assassination. 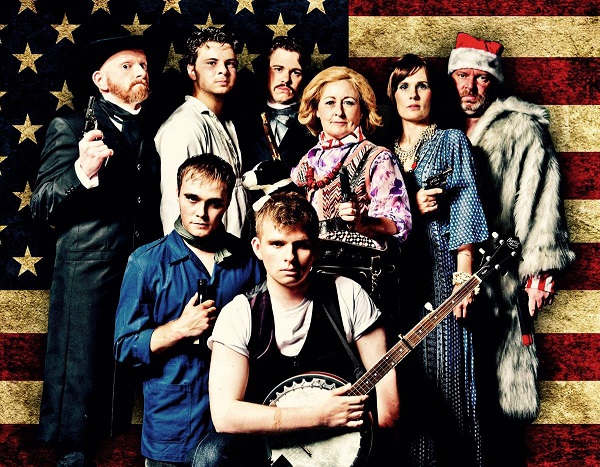 This musical could not be any more relevant today. Assassinations are planned and attempted, many done similarly in vein, by many disenchanted people around the world and it comes to no surprise with today’s political and social current affairs. The audience is invited to look into nine individuals who assassinated or attempted to assassinate presidents of the United States. Their build up and reasons include delusions, unfulfilled hopes, social and political injustices, broken promises and disappointments, which are explored. Only to be confronted that their desired outcomes didn’t turn out as they wanted it to be.

Sondheim cleverly mixes the characters from the different periods, reflected in the musical numbers, by all of them reconvening between their stories and shares their experiences which give a kaleidoscopic picture with history being reunited under one common theme. Though poignant it is also entertaining and attentive. The outstanding performance must be Kirby’s Samuel Byck who entertains the audience with poignant truths with some funny twists about the so called American Dream. Dressed up as Santa Claus he questions society and the government stating “Lie what’s right, lie what’s wrong”.

All the assassins are united with Another National Anthem which highlights the nightmare reality and disappointments of the American Dream which motivates them to meaninglessly act violent. In the end they seek solace in singing Everybody’s Got the Right with their happiness, being different and to their dream and, chillingly, to their death.

The lighting, courtesy of Adam Moore, provides the right ambience and mood for the musical with dim lighting representing metaphoric ally the dark chapters of United States’ history of the assassinations. Smoke is used as a special effect and the loud soundscapes, by Ian Thomson, for the gunshots.

Robert Readman directs an excellent production which gives everyone food for thought and in the politically and socially motivated musical there is more to the assassination themselves. Pick Me Up’s second Sondheim show, Sweeney Todd, will be playing on the 5th August at the same theatre.