Well, as tradition, it made sense after Palace Theatre’s Stage Experience production to visit the Liverpool Empire for their youth offering of the year. Usually presenting their own Stage Experience, they have decided this year to opt for their Youth Theatre to perform the full-blown musical of love, laughs, learning and law.

Famously a film, Legally Blonde tell the story of ‘classic/stereotype blonde’ Elle Woods (Ellie Clayton) who yearns only to be with her boyfriend of the time; the handsome Warner Huntington III (Isaac Hesketh). The show opens with her fella Delta New girls excitedly preparing for events ahead but, after mixed signals during a romantic date - or rather a date in a romantic setting - where she mistakes the lead up to their break up for a marriage proposal during ‘Serious’, she realises that to do so she must change her attitude to become ‘someone who wears black when nobody’s dead’. After a busy blonde battle of studying and resisting parties, determined to win him back, Elle rallies all of her resources and succeeds in securing a place at Harvard Law School to ensure her and Warner rekindle their love.

Standout show-stealer has to be Sarah Dickson’s beautician Paulette Bonafonte whose Ireland is pure brilliance, later featuring eh Irish dancers it requires, adding another dimension to Natalie Flynn’s well-directed show. With ingenious and slick choreography by Lauren Taylor that is executed with perfect precision, this show is as close to the professional as it can be, if a slight fudge of words/notes and loss of focus during ‘Whipped Into Shape’ and ‘Blood In The Water’ was not present from Michael Whitehouse’s Professor Callaghan. He should be admired for not letting his character waiver and I apologise for drawing attention to it as ‘normal’ audience members would have probably not noticed.

Maturely is shown exceptionally throughout, especially through Chloe Saunders’ fitness instructor accused of her husband’s death in Brooke Windham whose Whipped into Shape routine was another highlight of the show with great choreography. Georgia Mason’s Vivien is realistic and nicely replicated as from the film and original show with a black bob. John Armour does well doubling as Elle’s dad and a camp shop assistant.

Faye McDonnell’s portrayal of lesbian hippy Enid Hoops and Jacob Bailey’s multiple characters (UPS delivery guy Kyle and Paulette’s ex Huey) provide light-heartedness in humour and admiration of their well-thought-out characters, as do scenes/numbers like ‘Gay or European’ (hilariously featuring Cameron Patmore’s Carlos and Lewis Pryor’s Nikos) and ‘Bend and Snap’. Jacob’s stunning movement of Irish dancing during the Legally Blonde remix towards the end of the show was lovely to see.

It was nice to have learned before the show that leading pair Ellie and Daniel Greenwood (Emmett Forrest) are young lovebirds in real life and this is clear through the connection of chemistry, charm and charisma from the start.

No musical is complete without a strong ensemble providing wonderful harmonies and a great band, both under the direction of the talented MD Paul Lawton who was back by popular demand (not hard to see why).

Shy of a single microphone hitch and the aforementioned one, this is a show that any professional producer, theatre or production company should be extremely proud of. I look forward to returning here to see more talented performers, young and old. 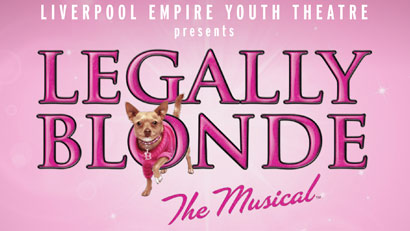