Based on the hugely successful British television series that ran for seven seasons, this uproarious comedy relates the adventures of a hapless cafe owner, René, in occupied France. You can see all of your favourite TV characters in the flesh, including Rene's tone-deaf wife Edith, Private Helga Geerhart and the Gestapo officer Herr Flick!

René and his wife have stashed a priceless portrait stolen by the Nazis in a sausage in their cellar, where two British airmen are also hiding until the Resistance can repatriate them. Communications with London using the wireless that is disguised as a cockatoo add to the many embarrassments this intrepid proprietor endures in the company of his patrons. News that the Fuhrer is scheduled to visit the town inspires tricksters disguised as Hitler to frequent the cafe. Meanwhile René summons all the wit he can muster to save his cafe and his life.

This production by Bacup Royal Court Theatre Group directed by Regina Arkwright follows the format of the classic BBC TV series very closely and maintains all the charm, wit and chaotic scenes synonymous with the excellent writing of Jeremy Lloyd and David Croft. The set by David Walton recreates the Nouvion café well with the bar, staircase up to Edith’s mother’s room and window out onto the town square all present. Smaller scenes set in front of the main café are well lit by Nick Daye and Paul Ashworth. The scene changes accompanied by pre-recorded music are at times a little elongated and disrupted the flow of the show somewhat. I particularly liked the blackboard at the back of the set displaying a message, which I am told changes nightly (a nice touch)! 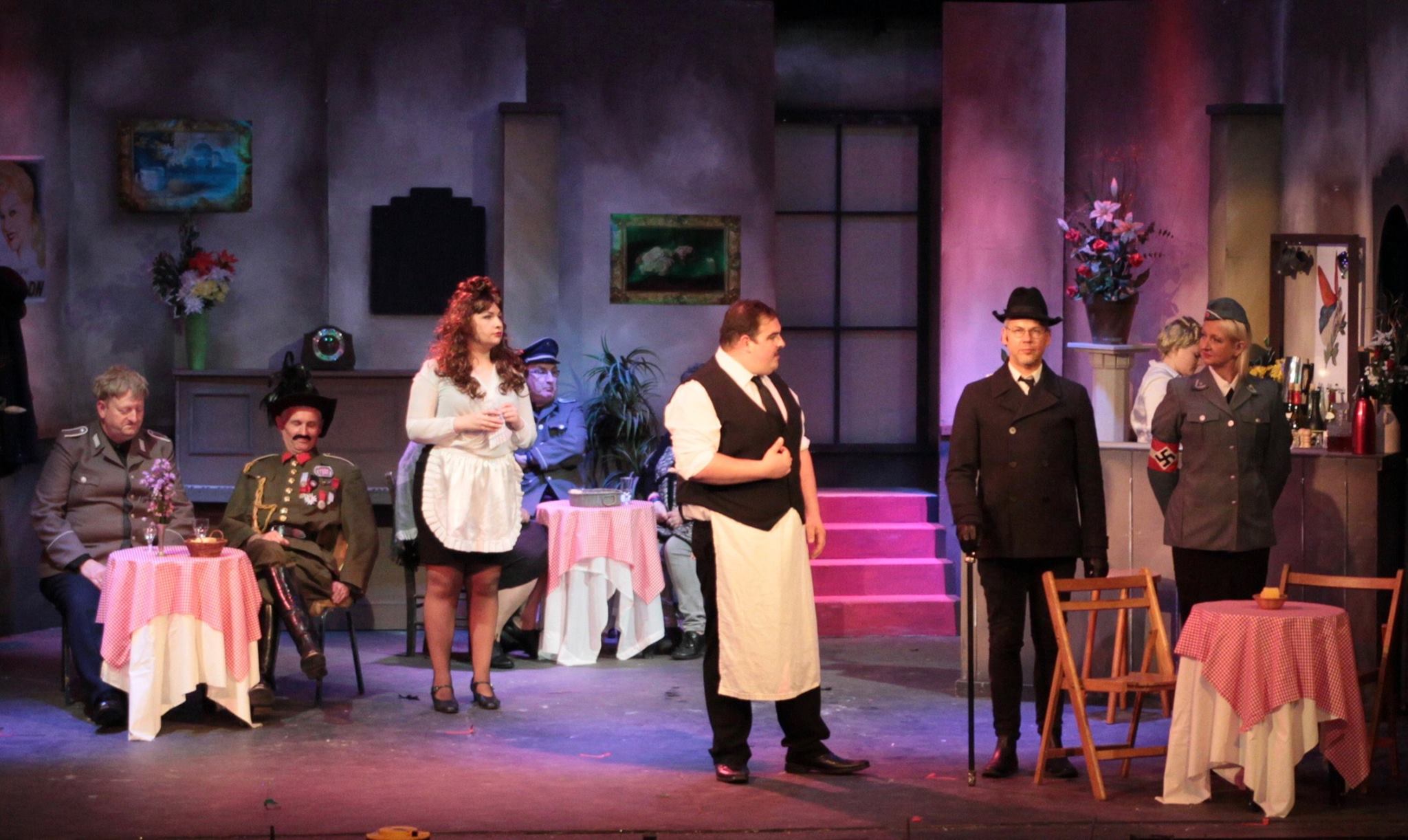 There were superb performances across the board including the two waitresses obsessed with René, Yvette (Lori Mae Hooley and Mimi (Emmeline Greenwood), German officers, von Strohm (Gary Haworth), Bertorelli (Stephen Woods) and von Schmelling (Nick Sands). There were brief appearances from the two airmen Darren Owen and Liam Duckworth, however I though more could have been done here with them appearing from more unlikely locations within the set. Also popping up in many different outfits was Leclerc played by Martin Ruane.

There were some standout performances on stage tonight. First up Guy Gibbs embodied the role of buffoon Policeman Crabtree with his catchphrase “Good moaning”. Kevin Roberts as Gruber was suitably over the top camp and brought some of the biggest laughs of the evening. Sophie Lord in her ever changing disguises as Resistance leader Michelle played the role with ease and had another of the show’s memorable catchphrases “Listen very carefully, I shall say this only once”. The pairing of Dawn-Marie Woodcock and Michael Howard as Helga and Herr Flick respectively were superbly cast and they bounced off each other throughout. 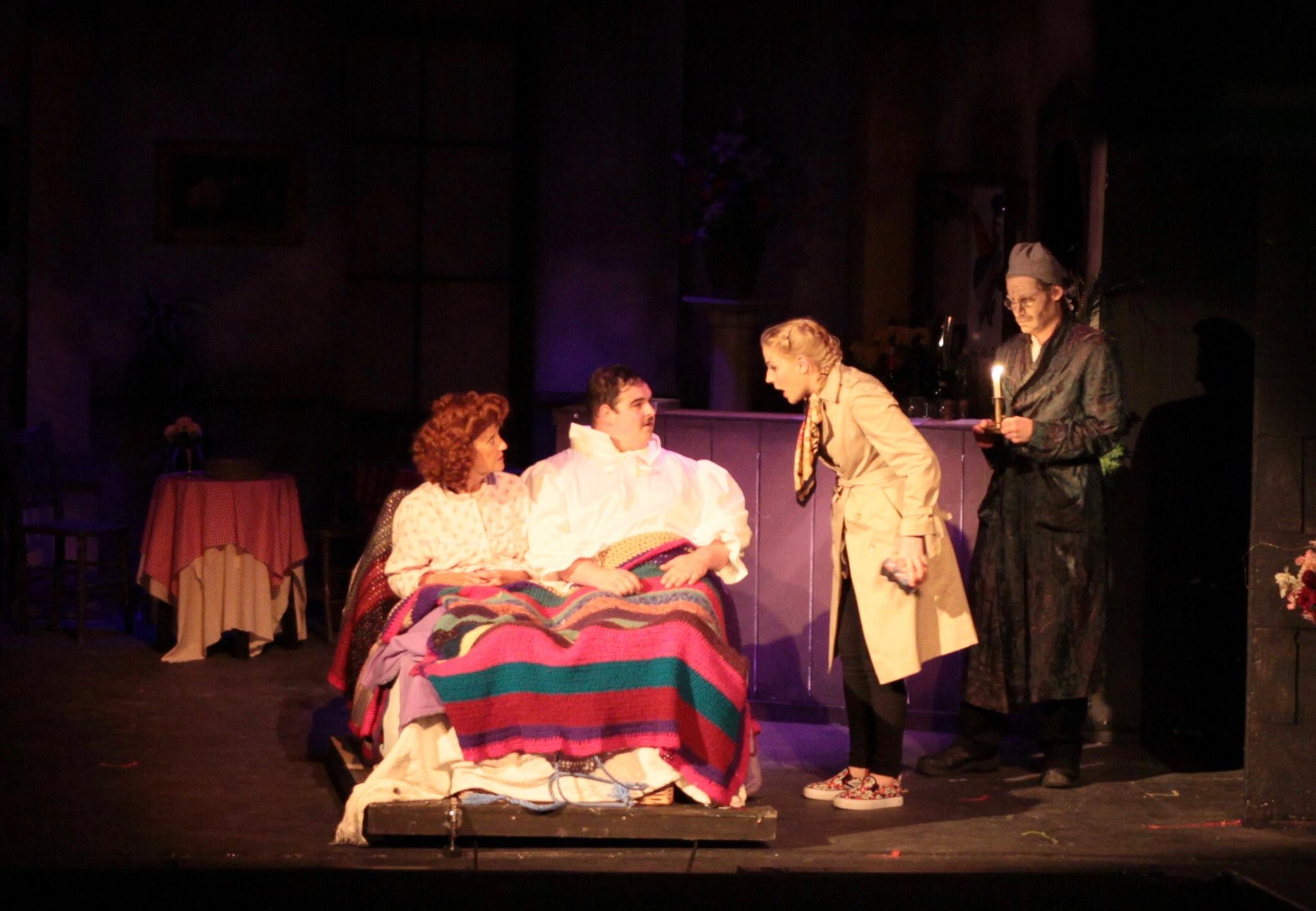 This show however belongs to Mr and Mrs Artois! Janice Purslow as Edith played a wonderful interpretation of the great Carmen Silvera’s role in the TV series. Everything from her look and atrocious singing voice was crafted perfectly and a joy to watch.

Jordan Barnes as René carries the whole show acting as narrator he is in the centre of the action throughout. Whilst trying to remain impartial, he is constantly dragged into the war by both sides and his exasperation at times is very well played. The scene between him and Gruber after the delivery of the secret radio was a real high point of the night. And of course the famous “You stupid woman” phrase makes a welcome arrival in the second half.

This was a great production and any comedy is best judged by the reaction of the audience, and tonight there was laughter throughout and applause following each scene. There can be no better gauge to judge a show on.

I look forward to visiting the Royal Court Theatre in Bacup again later this year. A hidden gem of a venue undergoing a new resurgence and North West End supports their desires to fully restore this theatre to its former glory. More information on how to support the venue can be found here!