Sale Nomads is a local amateur dramatic theatre group which was founded in 1946.   From the information available on their Facebook page, they seem to put on at least four productions a year.

'Curtain Up On Murder' was written by Bettine Manktelow and apparently she is renowned for 'exploring relationships between men and women and the problems that arise when they practice deception'.   This is certainly true of tonight's play – but I do think the script overemphasised this and placed too much store in the theme – at the expense of the rest of the play.

Without giving away any of the plot – which becomes a little complex at the end with a few twists – the story centres around a group of amateur actors gathered at a theatre at the end of a pier to rehearse their current play.   Tensions are running high as Alex (Adam Garnett) and Sylvia (Sarah Reilly) are having an illicit affair which is subsequently revealed to their partners, whilst at the same time, the group are having to cope with the fact that they have been locked in the theatre with no phone and no means of escape whilst one by one they are being despatched in a variety of different ways. 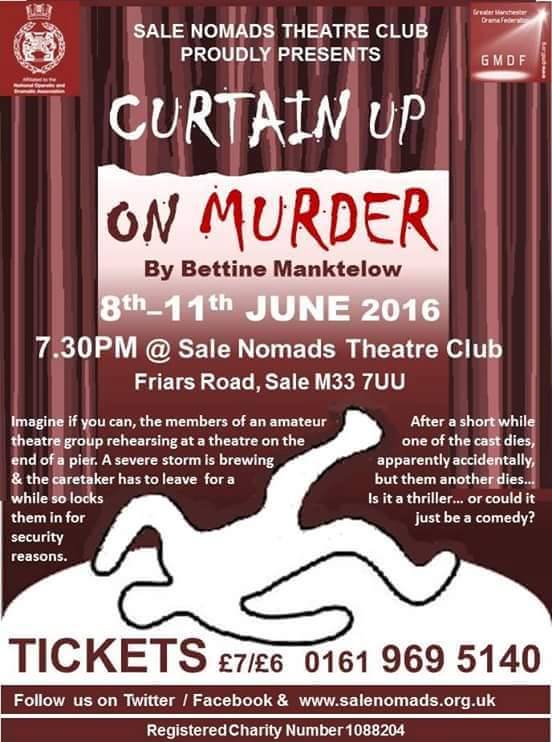 I am a huge fan of amateur theatre and the passion felt by those taking part in amateur productions. I realise how difficult it must be to read a review which is anything less than glowing.   I do feel, however, that for this production, more rehearsal is needed – I have made allowances for first night nerves which are quite understandable but there was a huge amount of prompting tonight – which was cleverly referred to at the very end of the play in a manner which I presume was meant to make the audience think that it had been intentional. I don't believe that it was but credit to them for trying to turn it around!   Unfortunately, when you can very clearly hear a lot of prompting, it does impair the suspension of reality which should begin as soon as the curtain goes up.

There was one part very early on when two of the actors were playing their parts in the play they were supposed to be rehearsing (the play within the play) – this was Alex and Moppet (Kath Johnson). This was my favourite part of the whole evening. They really nailed it and the audience loved it.   If I say they acted badly, this is a compliment as they were meant to be overacting and hamming it up, with some physical comedy too.   The standard at this point was raised very high.

I would like to give a special mention to Chloe Arrowsmith who played Ginny. She is the youngest member of the cast and I thought she was excellent.   She was convincing and her portrayal of distress and fear was very believable indeed. She has great potential.

I would say that most of the cast played the extremes of emotion well but sadly were not always quite so good when it came to normal conversation.   During these parts, I'm sorry to say that I didn't really feel that I was watching anything more than people reading lines and it was quite refreshing when there were extremes of emotion called for as they did do this well.

Much of the play focused on the adulterous relationship between Alex and Sylvia.   I found this to be rather tedious.   This is obviously not a criticism of the cast or the acting but it just went on for too long, it was repetitive and it didn't take the plot any further.   The beginning thirty minutes of the play was consumed mainly by this and it was boring. It also featured heavily in the second half and I thought it was quite unrealistic, incongruous and the dialogue was not at all convincing.   I actually thought a lot of the dialogue was not very convincing at all, neither were the characters' reactions to various situations which arose.

I'm not really sure this play knows what it is – it is a drama with some elements of humour but it also seems to be straining to comment on human relationships – which simply does not fit in with the "one by one" plot.   I also thought that it was slow to begin and then all the plot was crammed into the last fifteen minutes.

I wish Sale Nomads well for the rest of the run of Curtain Up on Murder which continues until Saturday 11th June.