The Remains of the Day - Theatre Royal, York

It’s a trip down memory lane at the York Theatre Royal with this moving production of Kazuo Ishiguro’s famous novel, adapted by Barney Norris and directed by Christopher Haydon.

The story takes the form of reminiscences by Mr Stevens, a butler who worked for many years in the service of the controversial Lord Darlington. After being ordered to take a holiday by his new employer, a wealthy American, Stevens ventures into the English countryside to seek out the estate’s former housekeeper, Miss Kenton. He hopes to invite her to return to Darlington Hall, ostensibly to solve a staff-shortage. As his memories unfold, however, it becomes clear that still waters run deep, and Stevens is perhaps hoping for one last chance at happiness with the woman he once loved. In the background of Stevens’ memories is the tragedy of Lord Darlington, a hapless gentleman brought low by his own noble impulse to avert the Second World War and who is manoeuvred into becoming an advocate of Nazi appeasement. 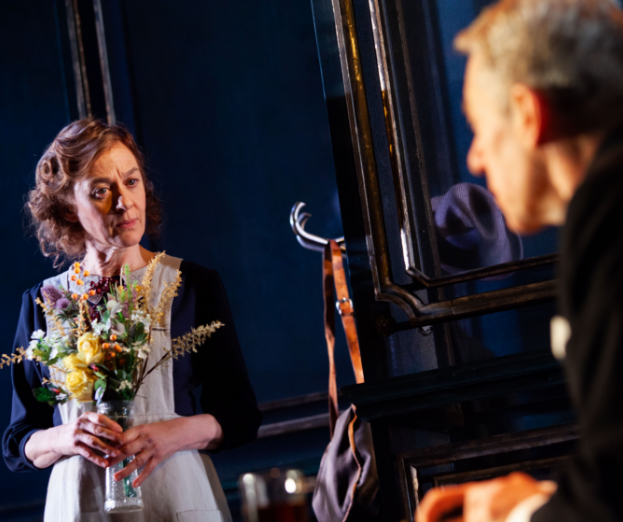 It’s to the production’s credit that these strands of narrative are interwoven in way that feels unforced and organic. Where the production is handicapped, however, is in the difficulty of bringing such a non-linear form of storytelling to the stage. Steven’s recollections play out alongside his interactions with characters in the present, often played by the same actors. This is apt to be confusing for audience members who are not familiar with the story and therefore have to work to piece together the narrative. As such, the play takes a while to get going and to settle into its own rhythm. Once it does this and the characters are established, the production does well to envelop the audience in the story. (The only jarring moment is a pointed Brexit analogy that is both confused and confusing, and unnecessary.)

Similarly, the actors take a little while to settle on stage, as they initially seem to force their dialogue. The production could benefit, at least initially, from more listening and spontaneity to keep the narrative and characters seeming fresh and engaging. This does eventually settle however, and much of the play’s success is down to Stephen Boxer (Stevens), who imbues the reserved and tight-lipped Stevens with enough sympathy to carry the audience along on the character’s journey. His final act of emotionalism feels deserved and cathartic. Similarly, Niamh Cusack (Kenton) is a likable point of contrast as Stevens’ foil and not-quite-love-interest. Cusack manages to be both playful and droll, and it’s a shame the story doesn’t give her more to do except to act as a mirror for Steven’s repressed desires. Miles Richardson (Lord Darlington) rounds out the trialogue and displays enough humanity and upper-class arrogance to make his fall seem both inevitable and lamentable. A special mention must also go to Stephen Critchlow, who manages to channel every pub bore and elitist snob simultaneously while multi-roling as various other characters whom Stevens encounters on his travels.

The set design relies heavily on the use of light and shadow, and it does well to give the illusion of being transported to the servants’ quarters in a grand estate, to a country lane in summertime, to a warm public house, to a café by the sea and, eventually, into the recesses of Stevens’ own soul. Likewise, the use of music is minimal but effective, creating an atmosphere of tension and melancholy. Actors often transition between scenes by choreographed motives, which were in part atmospheric, but sometimes felt drawn out and without added value.

In sum, The Remains of the Day is a dignified piece of theatre that is best appreciated for its fine performances. It is not stunningly inventive and suffers from a few stumbles along the way. But much like its protagonist, you can’t help but admire its pedigree, its seriousness of purpose and its sense of human fragility.