So, it’s Saturday night and it’s ‘Strictly’ night... What on earth would make you miss Strictly on the telly?? Why, Strictly FABULOUS on the stage, that’s what... And fabulous it certainly was.

A lovely little theatre called the Castleford Phoenix Theatre, one of which I had never heard of... Comfy seating and decent size too. Very professional (but friendly) staff and set up.

There was no set to speak of as it was just a plain black stage but it didn’t need a set to do any talking as the show did that.... Let’s start with the technical side of things – the lighting was sensational, turning each number into something more spectacular. The sound, for me was a little tinny to begin with, maybe the first song or two but soon levelled out and was great for the rest of the performance.

Not knowing what to expect, except for a lot of dancing, I was pleasantly surprised by the intimate story telling Robin Windsor chose to do. He told us of his childhood, where his dancing began, his travelling, his shows, his loves and loses and in particular, I was very interested to learn of his decline into depression at one point. It just goes to show what a smile and sequin can cover up. He told us of his work with SANE who help promote greater awareness and acceptance of mental illness and where his journey is taking him to next – Saint Lucia (very lucky boy {I know where my next holiday is}) 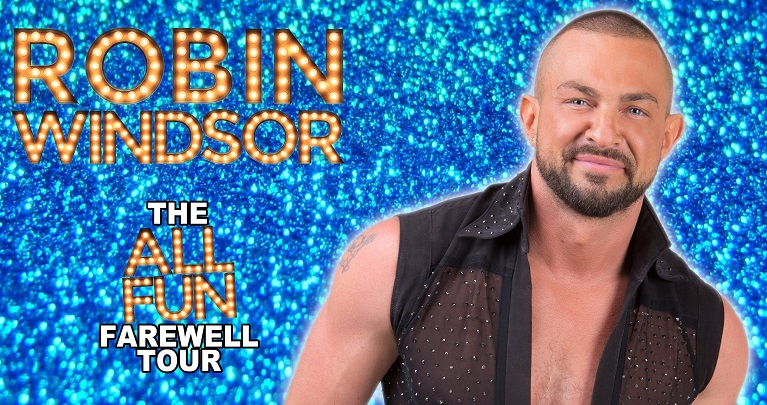 Robin, as per usual, was phenomenal in his routines which in the main he had choreographed ably assisted by Rose Wild. Every nuance of each dance, from toe to fingertip, was just exquisite. For me, he has always had an extra ‘something’ – can’t put my finger on it but his creativeness always stood out to me. My absolute favourite section of the evening was the ‘darker dances’ as his calls them, the tango and Paso doble and the amazing matador standoff between the male dancers was a highlight.

Robin was joined on stage by five other dancers – 2 male and 3 female. His lead female and partner was Strictly Come Dancing 2013 semi-finalist Anya Garnis. She was outstanding in supporting Robin but also in her own right as a dancer. Her lines - stunning, and transitions from one genre to the next seemed flawless - a very talented lady.

Joining Robin and Anya, were Victoria Martin, Nina Geric, Domenico Palmisano and Gustavo Viglio. All these dancers were superb and very watchable. All bringing a different something to the table but all equally as talented.

Although the matadors was a favourite of mine, my ultimate highlight was the heart-breaking routine to ‘Sister Act’ from the show of the same name, performed by Robin and Anya, just after he had told us of his depression issues. This must have been a truly emotionally draining routine but wow, what a routine... Simply breath-taking.

An eclectic mix of music brought all the styles of dance to life - from the traditional, Espani Cani, We’ll Meet Again and Puttin’ On The Ritz, to the more modern hits like ‘A Thousand Years’ and ‘Boys and Girls’

The costumes, provided by DSI London, were spot on in every routine. Congratulations to the wardrobe Mistress Kim Hill for the stunning outfits on both boys and girls.

All in all, this was an enjoyable night at the theatre and if you enjoy the medium of dance, then I would definitely encourage you to go and see it. Robin and the gang will be performing throughout October and November culminating in a special Charity show, for the Mad Trust Charity, on 25th November at the Novello Theatre in London with special guests.

Robin, you will be truly missed by all who had the privilege to watch you dance, either on telly or live. You set the stage alight and will be forever one of the gents of dance... Enjoy where your new life takes you (I will see you there at some point for a dance lesson)

Thank you for tonight and (sorry, got to do it).... KEEEEEEEP DANCING...