Pendleton Sixth Form College continues its run of productions, the first of 2019 being ‘Animal Farm’ produced by Neil Bennett and Joseph Meighan and directed by the talented Les Williams (acting teacher). Les Williams selected Peter Hall’s 1985 adaptation of George Orwell’s ‘Animal Farm’ as he believed it was the closest reflection to the 1945 original novel.

Animal Farm was written during World War 2 based on Joseph Stalin’s betrayal of the 1917 Russian revolution and the establishment of communism that followed. Key parallels in the play include the pigs Napoleon and Snowball mirroring Stalin and Trotsky, and the old Major as the father of communism Karl Marx. The remainder of the farm animals are representative of the Proletariat, with Farmer Jones as the affluent bourgeoisie. 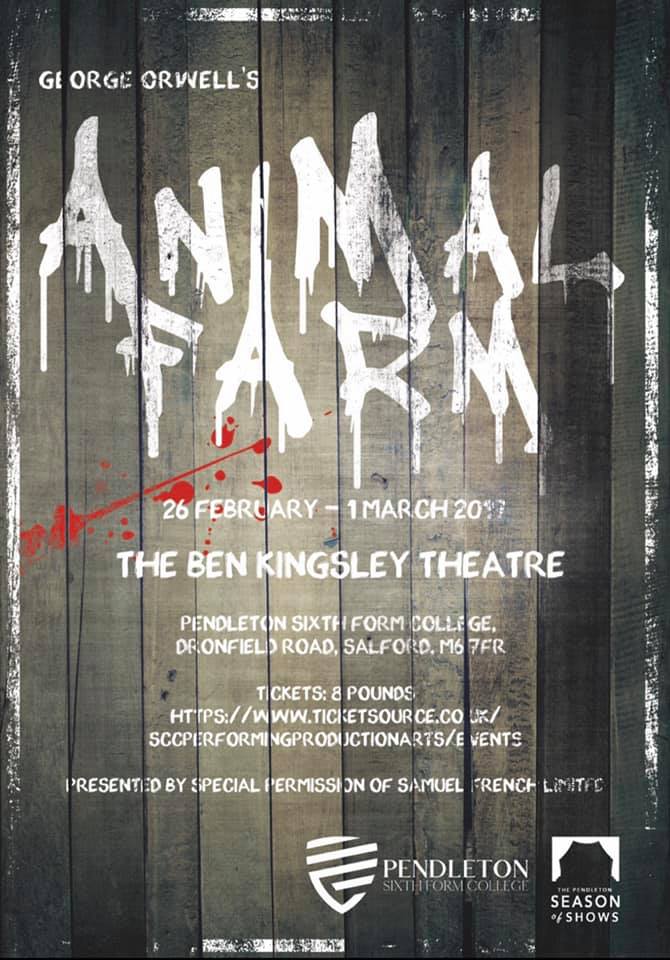 The play starts with the storyteller (Poppy Waxman) sitting down to read her fairy-tale book entitled Animal Farm whilst perched on a bale of hay beside the Manor Farm Yard as she begins to read the farmyard comes to life around her, the animals are sick of their neglectful drunken owner Mr Jones (Ethan Date) and inspired by the words of Old Major (Teddy Jones) to rise up against him and claim the farm for their own. Under the leadership of the pigs Napoleon (Leon Jackson) and Snowball (Connor O’Brien) they set about creating a new world in which everyone is equal and will do their fair share of the work for a fair share of the profit and rewards. But as time goes by and the story unfolds it seems the pigs’ idea of equality (increasingly conflicting with the other animals) is far from equal and fair making some animals more equal than others.

Orwell’s brilliant political satire clearly showcased the corrupting influence of power with the fall of idealism and the rise of tyranny after the farm yard animals’ rebellion against their oppressive human owner in their struggle for rights and equality.

The majority of the cast mastered their characters in particular Leon Jackson (Napoleon), Connor O’Brien (Snowball) and Max Race (Squealer) who made a terrifying trio as the ruling class of pigs who terrified and manipulated the farm animals they presided over. Also notable were Elliot Blyth’s and Amelia Ball’s portrayal of the old overworked farm horse Boxer and the motherly mare, where they excelled in their delivery remaining in character throughout with strong stage presence and professionalism.

It is no easy task being a farm animal for two hours on stage but it was evident that these talented teenagers had worked impeccably hard to perfect their roles which required extreme vocal and physical discipline; I particularly enjoyed watching the two hens Phoebe Fitton and Ella Meeks with their subtle head flicks and jerky movements as they ‘clucked’ around the yard.

Finally I have to mention the magnificent creative and genius set design, by Rhea Casalé and Graham Wilkins this was not only worthy of any professional stage but was an absolute visual masterpiece with astonishing perfection to the finest detail.

Well done to all involved as this is a particularly hard play to deliver for any theatrical performer.