Charlotte Bronte’s iconic novel has been turned into a ballet. For the eyes of a nation of book lovers this is a must see. Thoughts run wild, classic literature interpreted for the stage, how will this work? How will this much loved book be translated into the visual? Thus the love affair begins.

Cathy Marston is the woman who has choreographed this masterpiece which has had audiences eagerly waiting up and down the country. Tonight it is Salford’s Lowry Theatre which holds hosts to the Northern Ballets’ Jane Eyre.

The audience is greeted with a set designed by Patrick Kinmonth which cannot fail to please in many eyes. With a background in many disciplines mainly fashion, he’s a force to be reckoned with. His stylised grey hues provide a minimalist desolate backdrop. Think a sombre grey appeal, like nothing you’ve ever seen before in a ballet performance. It gives a fresh appeal to the hills of Yorkshire where the story is set and this boldly follows throughout. 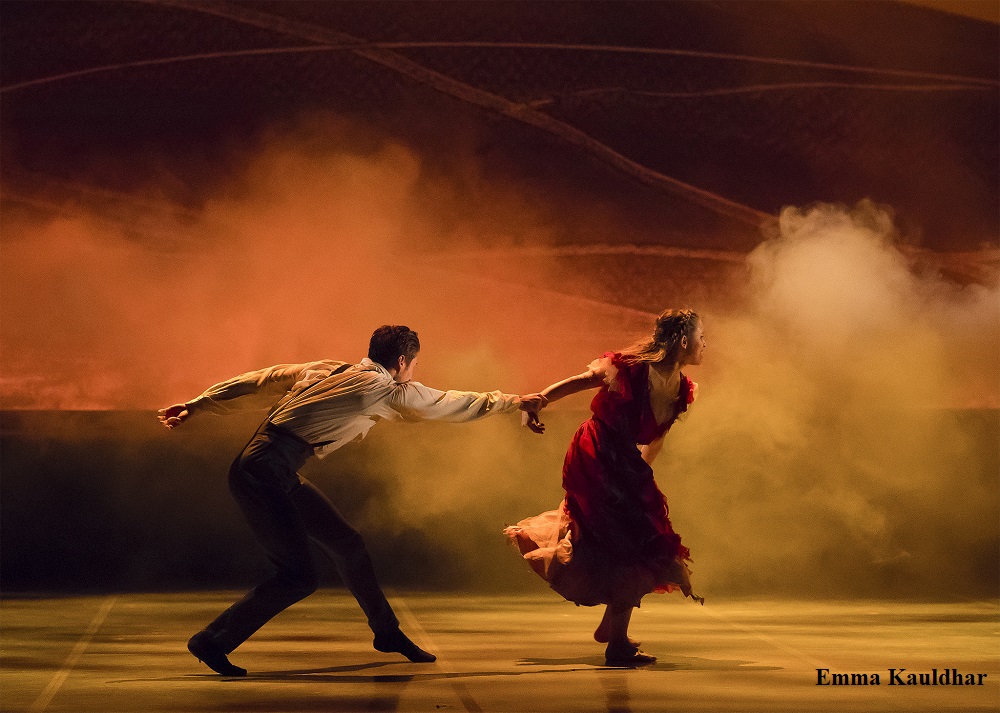 The costumes were fittingly of the era and it felt like you’d never seen ballet in this style. Still in keeping with the monotone yet enticing grey and black you were suitably entranced.

A young Jane is danced by Ayami Miyata tonight at the Lowry. Her dance skills are second to none as she demonstrates perfectly the full pain of our heroines’ dilemmas through perfectly executed routines and impassioned dramatics.

The men are few and far between in this book, so Marston has innovatively created the D-Men (a group of male dancers) who represent Jane’s close proximity to death at every stage of the way.

As a lack of male roles (surely makes for a change) they successfully give audiences something to think about and add a haunting aspect. Surrounding her and flocking her at every step of her dramatic existence.

Rochester (Mlindi Kulashe) leaps onto stage with full commanding air. His Rochester is spirited and full of teasing and bravado.

Companioned with the D-Men, whips are flung around, with a powerful music and cracking sounds adding to the moment. It makes you see the novel in a totally different light. Definitely ground breaking and brave of talented Cathy Marston’s direction.

The emotion and anguish of our protagonist is played so well. The duet in the second half with Rochester and Jane (Abigail Prudames) were enigmatic, so beautifully danced and enrapturing the audience. There was always a feeling despite being familiar with the story of what will happen next. It’s a great achievement that an old fashioned novel can bring such a contemporary feel to modern audiences.

Jane Eyre achieves what it set out to do originally which is make the reader or viewer sit upright in their seat. Expect the unexpected. Bronte would not be disappointed.