All That Glitters - Arts Theatre, Salford

Here is a story of the last Russian royal family, and their final months in the new Soviet Russia, before their execution in 1918. For most of the play, the story centers on the minutiae of everyday life of the Romanov family, from playing games in in the gardens, to being stuck indoors from common illnesses. The play itself is beautifully written by Saime (who also plays Grand Duchess Olga), and the world she imagines behind the closed doors of the Alexander Palace reveals that the Romanovs were very much just a normal family, who's lives would change forever.

The idea of the story holds great potential to be a success, however, sadly, at times, this wasn't well executed in the way one would hope. The play was quite slow in pace, and lacked energy in parts, and as most of the dialogue is set in the Alexander Palace, the scenes tended to drag, and was indeed tiresome to watch. The vast number of scene changes were very distracting, clumpy, and laboured. What was meant to be a cool, swift adjustment of furniture, turned out to be an act from the chuckle brothers. I felt sorry for the poor chaise lounge which was being shoved around the set like a yo-yo! Additionally, the shuffling from on/off stage was very messy, and noisy, I had to stop myself from laughing! 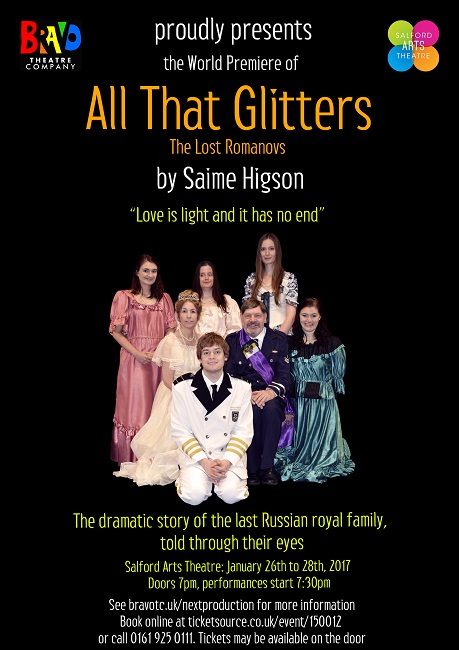 Having said that, there were special moments such as the beginning of Act 2; Olga sings an old Russian song and the family dance together, and for that small part I was transported in time, away from Salford and into the living room with the Romanovs. Watching the family dance and be merry was almost melancholy, and a sense of dark foreshadowing lingered in the air, which left me on tenterhooks. This captivating experience I had, unfortunately, didn’t last long, as the feeble direction led the wonderful story astray. There were beautiful glimpses of greatness and flashes of brilliance, but the inconsistency left me disappointed.

The actors all performed very well and were able to portray the lives of the Russian characters, although I have to say, Grand Duchess Anastasia was such a joy to watch! Her warmth and enthusiasm brought energy and life to her character, so much so, I wished I saw more of her. I should also mention the role of the Tsarista Alexandra, she was beautiful to watch, conveying expressive emotions of her love for her children and the pain of their life changing around them. Graceful and elegant.

As well as the joyful times spent at the Alexander Palace, there was also a sadness as the realty of this family's world dissolves, which was indeed hard-hitting. With the Tsar and the heir Alexi abdicated, the family line comes to an end, and in turn, lost forever.

'All That Glitters' is a great story to explore, and a compelling insight to what lies beneath the royal exterior. With revised direction and a few alterations, this play could go far and do extremely well. A story of a family that is lost and forgotten, breathes new life on the stage, splendidly written by Saime Higson.