Oh No it isn’t….Oh Yes it is…Oh No it isn’t ……. But in this case it IS, it IS, it IS!!! Yes… it IS simply one of the best Pantos I have ever seen for its vibrant beautiful costumes, fabulous scenery with amazing stage and lighting effects, choreography and of course not forgetting the stars of the show, the entire cast. A larger production could not have put on a better show.

Presented by Regal Entertainments by special arrangement with Samuel French Ltd, this version of Peter Pan was written by Liam Mellor who also performs as Mr Smee, the dimwit husband of Panto dame, Mrs Smee (Simon Foster) The antics of this couple bring everything you would hope to see with ‘cracking’ interaction with the audience and oodles of comedic moments whether intentional or not, and for the adults, the expected innuendo associated with Pantomime.

The curtain rose to a beautifully choreographed crew of pirates capturing the attention from the start, and showing true professionalism later in the show when a slight wardrobe malfunction hit one of the dancers when dancing as an Indian, and she simply sidestepped the offending item. Throughout this early evenings performance the dancing was spot on and a credit to choreographer Sarah Walker.

The three Darling children Wendy (Laura Gregory) John (Lee Morris) and Michael (Jamie Leahey) are settling down for bed as their parents head for a night out, and Wendy, a great storyteller, promises to look after her young brothers along with Nanna the dog. A gust of wind blows open the window and in soars the leader of the Lost Boys, Peter Pan (Ray Quinn) in search of the mischievous Tinkerbell, who has entered the bedroom minutes before. The original story describes Peter as bring ‘a beautiful boy with a beautiful smile and if ever someone suited the part to a ‘T,’ it has to be Quinn. His obvious love of the part he was playing shone through and it really doesn’t appear to be hard work to him, with his laid back manner, ease of dance routines and his twinkling eyes. His flying skills are exceptional (he didn’t learn that on the X factor but maybe on Dancing On Ice!) and as he takes to the air with Wendy as she ‘believes’, they fly off to Neverland and this is where some of the stunning special effects are shown. I know from the stage that actors say they cannot really see beyond the first couple of rows, but Quinn engaged with the audience from the start and his gaze often included those up in the balcony who I often feel are forgotten about. 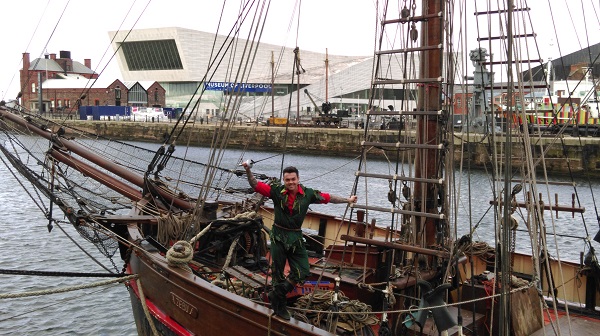 Tinkerbell (Claire Simmo, who is enchanting in her role) arrives back at Neverland, where children never grow up, with the two Darling boys, and tells the Lost Boys that Wendy is really an undercover pirate sent by Captain Hook and they should tie her up when she arrives. Poor Wendy is captured but released on the command of Peter Pan. When he realises that Tinkerbell, who is jealous of his friendship with Wendy is behind the plot, he banishes her from Neverland for a day. In her anger she betrays Peter Pan and the location of the Lost Boys to the menacing Captain Hook. And what an evil figure of a baddie Philip McGuiness portrays. Never have I heard the booing of someone so loud, which fortunately, in the case of Panto, just shows how brilliantly he plays the character of Captain Hook. Everytime he appears, the booing and hisses start with children in the audience thoroughly enjoying the moment. Actually the adults were not slow in joining in either!

During the pantomime there were many songs performed covering a wide range of years and not just the expected chart toppers, which was a change from the usual format and was really great to hear. Everyone was up dancing at the end to ‘Let’s Dance’. There were some lovely strong vocals too, particularly from Charlotte Gallagher as Tiger Lily. I think this is possibly the first time I have been able to hear all vocals clearly throughout a show, the sound department had it just right and all main characters had radio mics.

At the beginning of the panto we are told that a couple of programmes contained a golden ticket which would allow someone to become part of the show. The little boy in front of me was a winner but refused to go onto the stage, the other winner was a little girl aged 6 from Kirkby who absolutely, and I know Mr Smee won’t mind me saying this, stole his limelight! She was so confident and gave him a run for his money……. Never work with kids or animals they say! Instant photographs of Mr Smee and Tinkerbell are available on stage after the show, I think many were disappointed it wasn’t Peter Pan too.

For great family entertainment and much more value than a chocolate egg, get the kids in their Tinkerbell and Peter Pan outfits and Swashbuckle your way to the Theatre Royal, St Helens…..and as there are not enough words to describe its brilliance I will make my own up… simply a ‘Pantabulously Pantastic ‘ show!

Running until the 17th April 2016 and for tickets and further information contact http://www.sthelenstheatreroyal.com/